Cyprus is a divided land — it is home to the last divided capital in Europe, and the entire island is separated into two, with Cypriot and Turkish military posts facing each other non-stop for the last 26 years and with the UN peacekeepers’ posts standing between them. My flat in Nicosia looks out towards the old airport, where some of the most intense fighting took place in 1974 and many soldiers lost their lives. It’s not a happy situation, it’s just the political reality. The Green Line, as the buffer zone between the recognized Republic of Cyprus and the de facto Turkish state in the North is mere meters in width in Nicosia, but it’s as much as 7-Km wide in the country-side. And when Turkey invaded in 1974, residents living in these areas had 24-hr to evacuate. They’ve never been allowed to return. Wildlife, now, have a free pass to reclaim these areas. A friend of mine (our wives went to school together as kids) was quoted by the BBC last year describing the Green Line:

“This area was originally called the green line because a soldier drew the line with a green marker pen on the map, but we’d like to show the world it is a green line because it’s a wildlife corridor,” remarks Nicolas Jarraud, an environmental officer from the local UN Development Programme.

All of this has consequences for birding here in Cyprus. This wildlife corridor that is the Green Line preserves habitat and the animals that live there, but birders cannot go there. BirdLife Cyprus occasionally receives reports from UN staff who work at the old Nicosia airport – birds such as out-of-season Hoopoes and Long-eared Owls in the past year. But though I live only a few hundred meters away, I probably won’t get to see birds at that spot.

I do however get to see and hear some birds that venture into my neighborhood from the Green Line, despite it being rather impoverished as far as vegetation goes. For instance I can occasionally hear nocturnal Stone Curlews, Cyprus Wheatears still nest in my neighborhood, Willow Warblers and Black Redstarts are extremely common in the right time of year, and so on.

Living in a divided land also means that getting to the other side of the Green Line to go birding is problematic too. I have – once – and I saw three Bonelli’s Eagles, two Eleonora’s Falcons and two Hobbys that day. Really quite beautiful. But it’s not likely I’ll get to go visit again – there are simply too many deep emotions involved, and I don’t want to upset anyone.

Such is the life of a birdwatcher in a divided land. 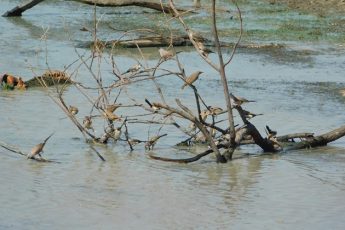