October 9, 2014 by Meredith Mann No Comments 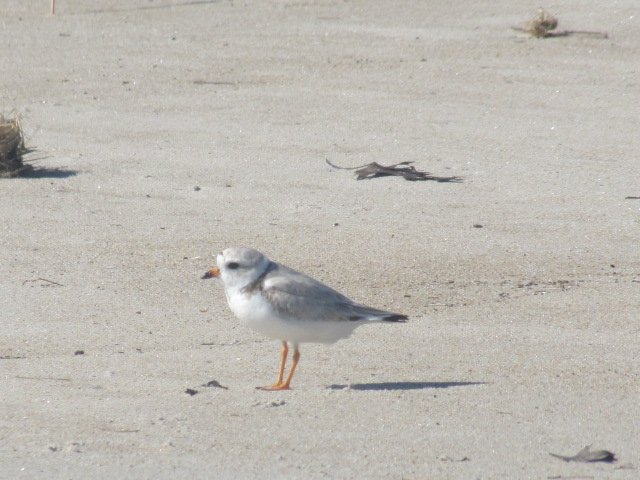 As bird lovers, we’re happy that laws exist to protect birds, and that people are especially looking after protected species. But sometimes, what’s best for the birds and what’s best for the humans collide. In the United States, a few of those conundrums are making news.

In the New York metro area, not-quite-hurricane Sandy unleashed a significant amount of devastation back in October 2012, with storm surge and severe flooding along shorelines. Public officials are still working to mitigate the effects of the storm, and one idea they have is to jack up the sand dunes around Fire Island, a sliver of “barrier” land that keeps the brunt of storms from hitting nearby Long Island. But parts of Fire Island are nesting habitats for the threatened Piping Plover (like the one above that I photographed, albeit in Massachusetts). So a judge weighing the two needs—birds’ homes vs. peoples’ homes—just decided to maintain a restraining order preventing the Army Corps of Engineers from proceeding with the sand-restoration project. Environmental officials believe the plan can be reworked so that the Plovers’ habitat is protected.

Meanwhile, on the opposite coast, Double-crested Cormorants are interfering with plans to tear down the old Bay Bridge between Oakland and San Francisco. The birds nest in the span, which is being replaced by a new bridge. But nearly $2 million in efforts to get the cormorants to swap their nests to the newer structure haven’t gained much traction, and the teardown of the old span is in limbo until they can be relocated. If the Cormorants stay stubborn, officials estimate that the price tag for moving them and speeding up work on the structure (before next year’s nesting season halts it) could approach $30 million.

Just When You Think There's Nothing New Under The Sun

« Previous post
Portrait of a Redtail with Grey Hoodie String
Next post »
Keep Your Eyes on the Trail: Mad Cow Edition