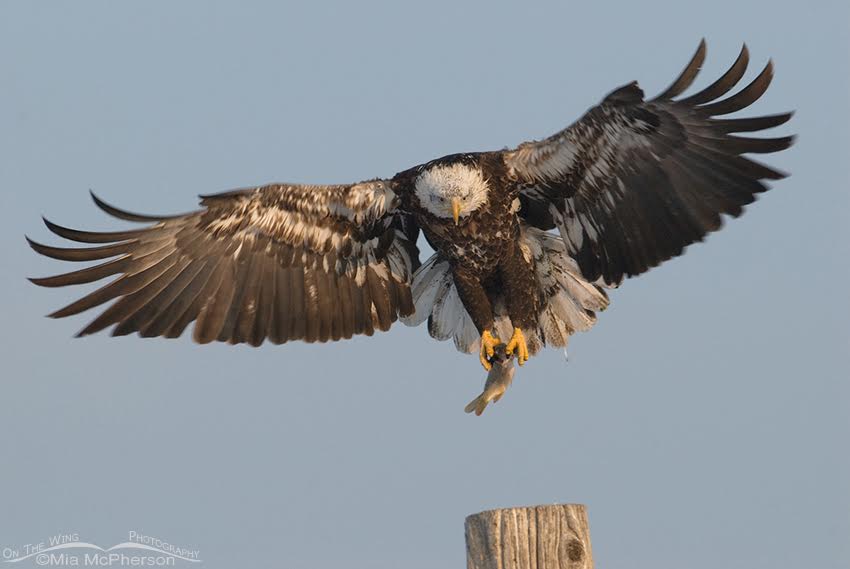 Picture this. You’re wandering through a park, minding your own business, and decide to take a short rest on a bench. You sit down. You want to get comfortable, so you lean against the armrest. Surprise! Thousands of volts of electricity snake through your body.

This is what happens to countless birds each year when they land the wrong way on power distribution lines and poles. It’s impossible to give an exact number because normally there are no witnesses. But occasionally people see it – especially when it’s a hard-to-miss bird like this Bald Eagle.

Most utility poles are potentially lethal, and they are everywhere. A bird can land on one a hundred times and then, on the hundred and first, be electrocuted because she touched the inch of bare wire coming out of an insulator. She can land on a transformer once then, the next time, be killed when she brushes up against the jumper wire. She can land on another wire with impunity, but not if she’s holding a wet fish.

Doesn’t the magnitude of the situation seem overwhelming? It’s not. This is a perfect example of the old adage, “If you want to change the world, start in your own backyard.”

Jayne Neville, a former wildlife rehabilitator specializing in songbirds, moved from Connecticut to Florida and immediately began making the acquaintance of all the birds in the area. Within walking distance of her house were a pair of Bald Eagles with two chicks. One morning she discovered the male eagle on the ground, appearing – as you can see from the two photos –  unwell. Part of the rabbit he had caught was still entangled in a nearby powerline.

Jayne had a pet carrier handy for wildlife rescue and the eagle was transported to Peace River Wildlife Center and treated for electrocution. Knowing the dangling rabbit remains would be an irresistible target for other birds, Jayne called the local power company. As always, getting through to an actual person capable of making a decision took incredible patience and perseverance, but she did it.

Florida Power and Light arrived, designed a retrofit for 12 poles around the area, and all of them will be installed before the end of May. The company was absolutely responsive and willing to help.

Kelley Ward, founder of Featherhaven in Washington State, remembers a nesting pair of eagles across the creek from her house. One day she came across one of the fledglings sitting on a power pole, surrounded by wires. She took a picture at 6 PM and emailed it to both US Fish and Wildlife Service and Washington Department of Fish and Wildlife. “The next day at 9 AM Puget Sound Energy was knocking on my door,” she says. “Within two days they had fixed 22 poles in Enumclaw! A picture is worth a thousand words.”

You can find a whole page of information on bird electrocutions on the US Fish and Wildlife Service website.

The Avian Power Line Interaction Committee was formed in 1989 to address whooping crane collisions with powerlines, and has expanded to include all kinds of avian/powerline problems. Members include over 70 utility companies, Edison Electric Institute, U.S. Fish and Wildlife Service, and National Audubon Society.

Occasionally you may come across a power company that stalls or outright refuses to help. You can explain to them that with minimal effort they can be the good guys – otherwise you will not only alert Fish and Wildlife, but also make sure the story (and photographs) end up in the media. I once offered to bring a dead Red-tailed Hawk to a company’s headquarters and place it on the desk of an uncooperative supervisor, and a crew arrived at the pole that afternoon.

The downed adult eagle was electrocuted on March 31. He was one lucky bird, as he sustained no permanent damage. As a matter of fact, he recovered with amazing speed and was back on his nest on April 3.

“I think the female was watching in disbelief as he emerged from the carrier,” wrote Jayne. “He had been gone for four days, and he left her alone with the chicks. For a good while, they were perching apart – I don’t think she was speaking to him.”

Banner and final photo by Mia McPherson, On The Wing Bird and Nature Photography

Second and third photos by Jayne Neville, fourth by Kelley Ward of Featherhaven. Both Featherhaven in Washington and Peace River Wildlife Center in Florida are non-profit organizations supported entirely by donations, grants, and fundraising.