Yesterday, April 9, was my birthday, an occasion that allotted me an array of indulgences, from Pecan-Raisin French Toast for breakfast (with real maple syrup, naturally) to an assortment of festive physiological pollutants throughout the day. I like to share my special day with family and with friends, but whatever the itinerary, part of it also has to be spent outdoors. So that’s how it went down.

My busy social calendar coupled with Sara’s advanced pregnancy precluded an excursion of any ambition. We skipped Central Park since we had plans in Manhattan later in the day and nixed Inwood Hill because the full flood of spring migrants hasn’t arrived yet. Van Cortlandt Park on a warm Sunday is way too crowded. Therefore, we defaulted to Lenoir.

Lenoir Preserve is always a sure thing but rarely surprises. Still, it’s been good to me so far this year, especially with the recent phobes and Carolina Wren. I’ve spotted Pine Warblers there before, so it seemed a good place to seek out those recent arrivals to NYC. Warblers were not to be, but all of the other shoulder season species were present: juncos and white throats on their way out, plentiful tail-pumping phoebes on their way in. We spotted all the feeder species and woodpeckers by the score, mostly downies and flickers. Sara even caught another brief glimpse of the mysterious owl that’s taken residence there, this time as it was being mobbed by a murder of crows. Too bad Mason and I were too busy bushwhacking at the time; Mase has taken a shine to hiking but hasn’t grasped the concept of paths, at least adult-sized ones, just yet.

Anyway, Lenoir was mostly more of the same yesterday, except for one bird, or actually one pair of birds. I had my eye on a shady expanse of grass that sparrows seem to favor. Along with the aforementioned Dark-eyed Juncos and White-throated Sparrows, Song Sparrows were hopping around in search of food. While scrutinizing the songs for possible Savannahs, I noticed one tiny emberizid that lacked the anticipated streaking. A more deliberate look revealed a head of soft brown and stone gray along with an eye ring and a pink beak. This was a bird that had eluded my gaze for years. At last, a Field Sparrow!

I understand that it’s hard for some people, even birders, to get excited about a sparrow. But all of us understand the thrill that overtakes a birder when, upon laying eyes on a bird for the very first time, its identity is exclaimed with a thunderbolt of certainty. Now imagine that the species in question is a sparrow, a proverbial little brown job. And, I might add, it’s your birthday! Now you might share a sense of the excitement I felt on observing my life Field Sparrow. The photo below may be a bit fuzzy, but it’s the best look at a Spizella pusilla I’ve ever had! 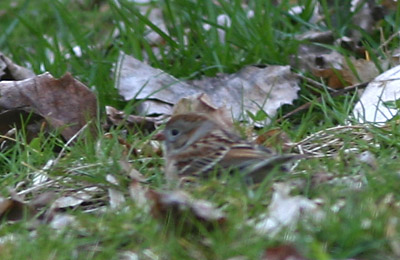