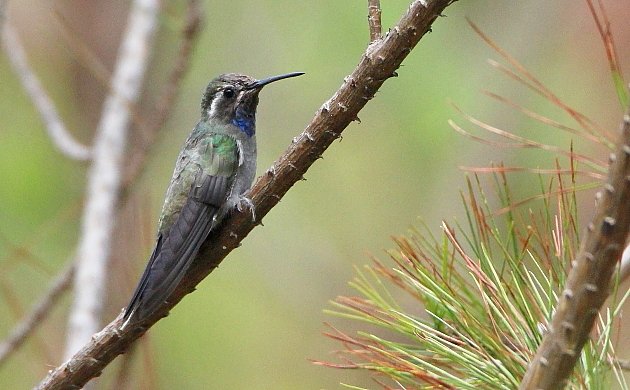 With their exceptional metabolism, Hummingbirds are almost constantly on the move to find each season’s best feeding grounds. My area of central Mexico is rich in Hummingbird species, but I do not know any places that are year-round sure things for large numbers of Hummers. Still, when a site gets good, it really gets good!

Of all my favorite sites, none is as socially distanced as Cerro de Garnica. This national park sits one hour east of my home in Morelia, at around 10,000 feet (3,000 m) above sea level. It is along a stretch of the old Panamerican Highway known as “Mil Cumbres”, or “One Thousand Peaks”, which gives you an idea of the spectacular, and spectacularly twisty, drive there. Cerro de Garnica, and its pine-fir forest, is also a lovely site for Hummingbirds.

When I visit Cerro de Garnica, I always end my climb at an area of several acres that was reforested some five years ago. Back when I first found the site, the newly planted pines were only as tall as the lupines and sages among which they grew. I remember seeing Red Warblers and other insectivores feeding in these fields then. But now, these same pine trees are 10 to 15 feet tall (3-5 m), and what underbrush remains is largely thistles. Which, it turns out, suits one Hummingbird species just fine. 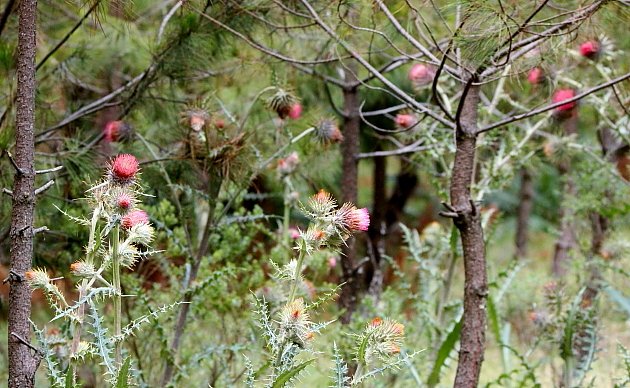 When I first arrived at this area recently, I was confused by the bird calls I heard everywhere. I was surrounded by loud, piercing EEP! sounds, and my first thought was that they sounded like a flock of Bushtits on way-too-many steroids. A more perceptive idea might have been the call of Nutting’s Flycatchers, but, of course, that species would never congregate in such numbers.

Still, it only took a few minutes to realize that the air was full of Hummingbirds flying every which way, and that the calls I was hearing, though unlike any Hummer call I had ever heard, did indeed come from these birds. As soon as I got a good look of one of these, I checked my Merlin recordings, and discovered that the particular species in question does have a call very unlike the usual clicks and buzzes I associate with the family. Cerro de Garnica, or at least the upper part of my route there, was crawling with Blue-throated Mountain-Gems. 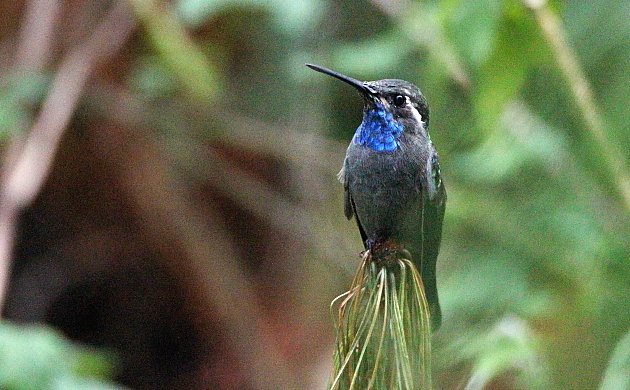 There is a simple reason why I had never learned the Blue-throated Mountain-Gem’s call before: this species is not one I often see or hear. But there they were, perhaps dozens of them, all giving their piercing calls and chasing each other through the pines in typical Hummer fashion.

And in this particular area, they had competition: smaller, but still significant, numbers of Rivoli’s Hummingbirds. This hummer, known as the Magnificent Hummingbird before being split from its Costa Rican relative (now known as the Talamanca Hummingbird), is as large as the Blue-throated Mountain-Gem. But having the two species side-by-side taught me that the Rivoli’s are less feisty, and much more inclined to hover for minutes before a single thistle flower. Which makes them much easier to photograph! (But, sorry, no good photos with their beautiful purple crown and green gorget.) 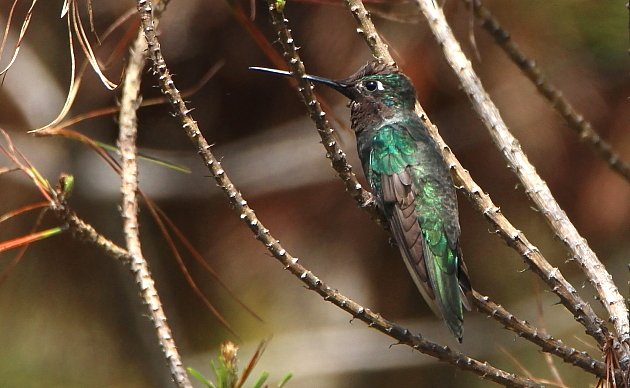 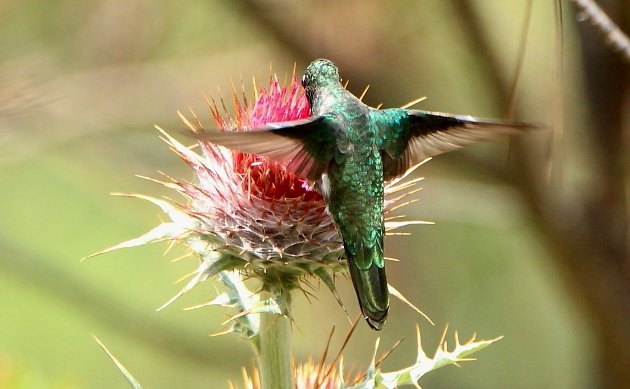 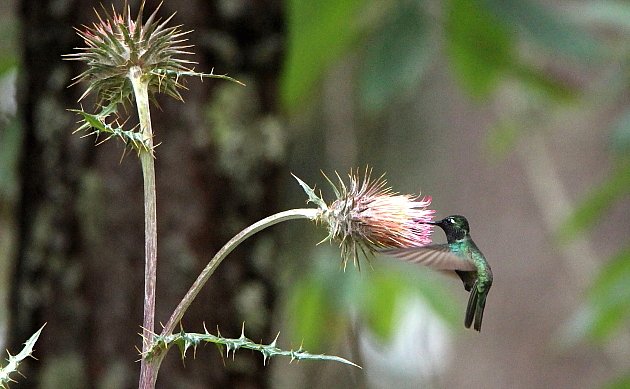 Even though the pine/thistle patch gave as good a Hummer show as I had ever experienced, its Blue-throateds and Rivoli’s were not the only species for the day. A flash of rose-pink elsewhere alerted me to the presence of the (for me) rare Amethyst-throated Mountain-Gem, a close relative of the Blue-throated. Unfortunately, I only managed decent photos of one female, without the male’s amethyst throat; but that slight orange moustache was enough to confirm my ID. 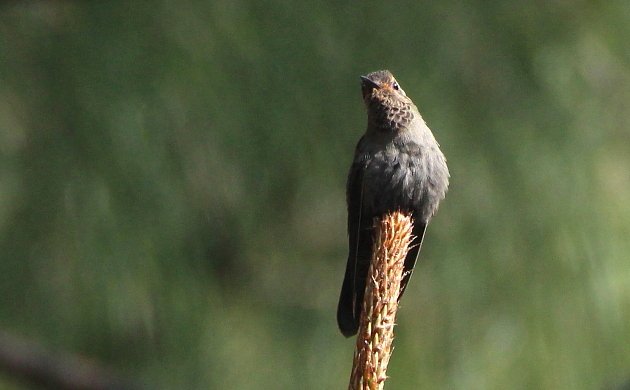 And hey, you can’t be in the central Mexican highlands without seeing a few White-eared Hummingbirds, can you? 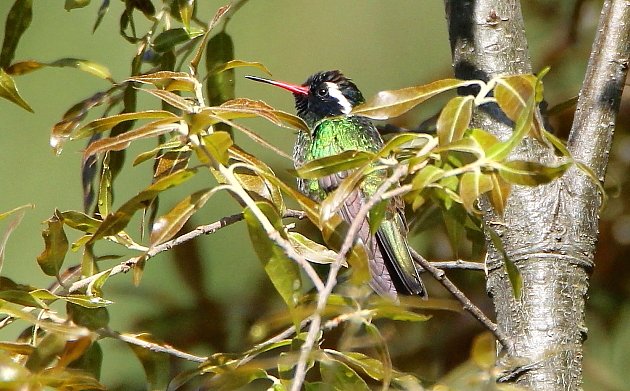 It wasn’t all Hummingbirds. An eager-to-please Golden-browed Warbler, and the rare opportunity to see both the Russet and the Ruddy-capped Nightingale Thrush, would have been enough to make me happy. But the Hummingbirds definitely won the day!

In case you are wondering, Blue-throated Mountain-Gem and Rivoli’s Hummingbird have been known to occasionally breed in the southwestern U.S., just north of the Mexican border. White-eared Hummingbirds very rarely wander north of the same border. But the Amethyst-throated Hummingbird is a strictly Mexican and Central American species.

Peregrine Falcons: Too Much of a Comeback? 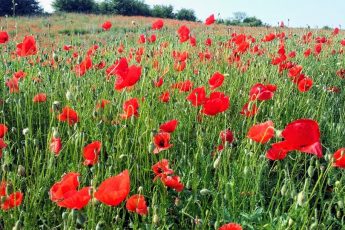