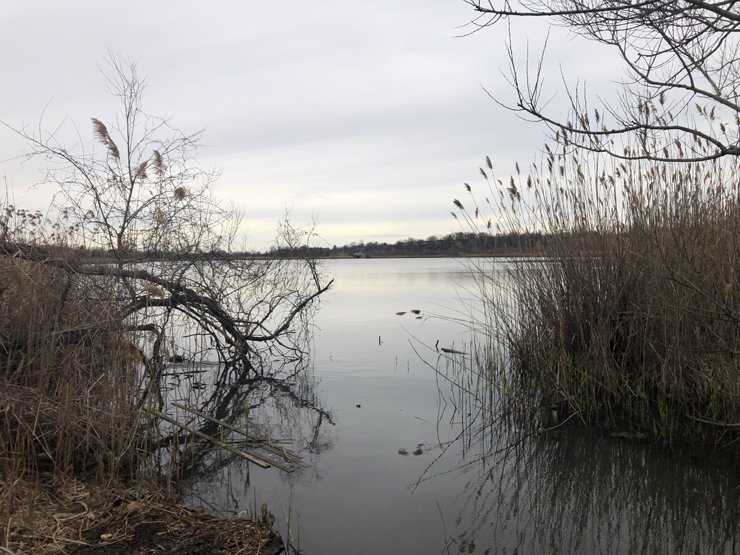 I am a birder living in the epicenter of the epicenter of COVID-19 right now. New York City is the hottest of hot spots, and not in the fun, eBird meaning of the term but in the “holy moly our health system is going to collapse” meaning of the term. My home borough, Queens, has the most cases out of the Big Apple’s five boroughs. On top of that my day job – which at this point is an all-the-time-job – is being a union representative for registered nurses, a sometimes difficult occupation made horrifying, maddening, and exhausting in the current pandemic.

So you can imagine that sometimes I need to take an hour and not be in my typically cramped New York City apartment and not think about COVID-19, and just be out-and-about in nature. I don’t want to add to the burden on our already strained health care system so I am not wandering far from home and I practice strict social distancing. This is made easier by getting out early in the morning and walking to Willow Lake Preserve, the fine natural area at the far southern end of Flushing Meadows-Corona Park. 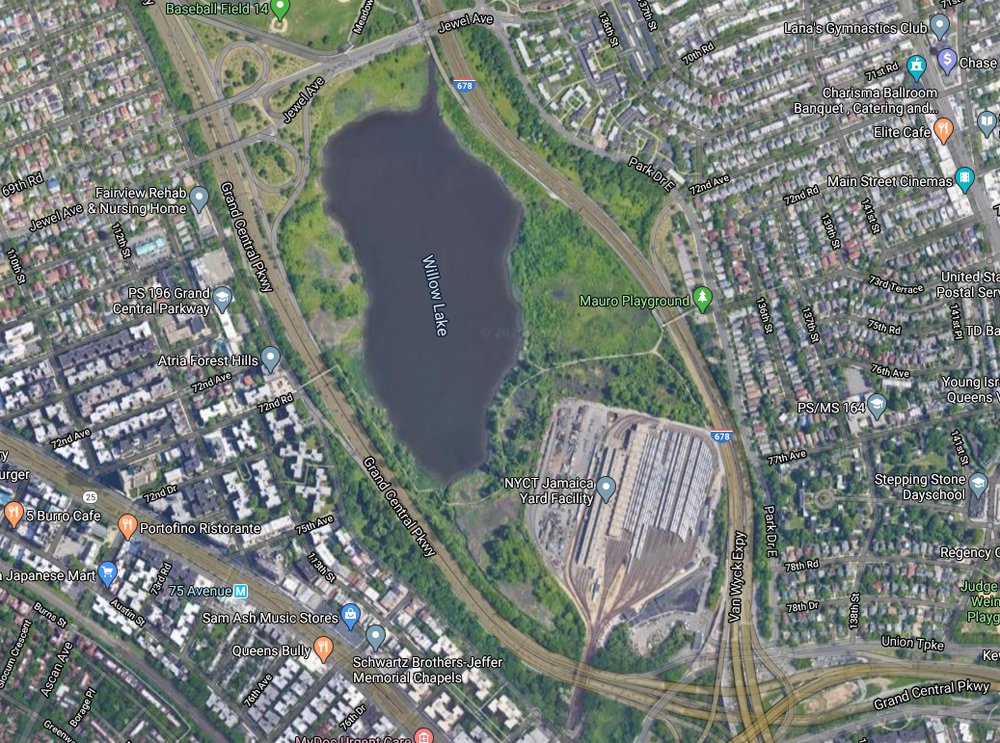 an image of the Willow Lake Preserve from Google Maps

As you can see, Willow Lake is bounded to the west by the Grand Central Parkway, to the east by the Van Wyck Expressway, to the south by the city transit authority’s train yard, and to the north by Jewel Avenue. Access to the preserve is via footbridges over the GCP and the Van Wyck. The space between the lake and the Grand Central Parkway is particularly narrow and the path is extremely wet most of the year so there are paving stones and wooden walkways to keep you out of the disgusting runoff from the highway. The marshy areas around the lake help filter many of the contaminants from the surrounding urban landscape, though the oozy mud the path goes through often has the rainbow sheen of oil products. The large open area on the east side of the lake is also often very wet but if you know your way around you can pick your way through it without waders at all but the wettest times. This is a great area to find Wilson’s Snipe, especially in spring. Over the years I’ve seen a variety of open-country birds there, including Bobolinks, Vesper Sparrow, and American Kestrel. One memorable morning I accidentally flushed an American Bittern from nearly underfoot!

Over the years birding Willow Lake I had added nearly eighty eBird checklists at the preserve and netted myself 127 species, good for number two on the eBird hotspot list. Since the pandemic I’ve added one new species to my personal list for Willow Lake Preserve, a Field Sparrow. My birding there in normal times tends to be in winter and early spring: I’m getting Common Mergansers and Bald Eagle for my year list in January, scouting for the Christmas Bird Count in late November and early December, and making sure to find Wilson’s Snipe in the early spring. Later in spring I tend to bird other locations that are better known for passerine migrants like the wood-warblers we all want to see. I don’t anticipate adding many new birds to my list for the preserve unless (until) the pandemic stretches into late April and early May.

looking west from the east side of the lake (I live near the big building on the left.)

Already in my several walks there recently I’ve enjoyed a juvenile Bald Eagle, hordes of Song Sparrows, an early Common Yellowthroat, a nice Rusty Blackbird, and, most importantly, some moments of calm in a crisis. I don’t know how everyone else is handling the stress of social distancing, constant horrible news, and tight living quarters but I don’t think I could get through it without having a birding oasis to which I can escape. One of the nice things about the pandemic is that the traffic noise is lessened somewhat as there is less volume and there are many less planes going overhead as air travel has been vastly curtailed. (Willow Lake is on the LaGuardia Airport flight path.) 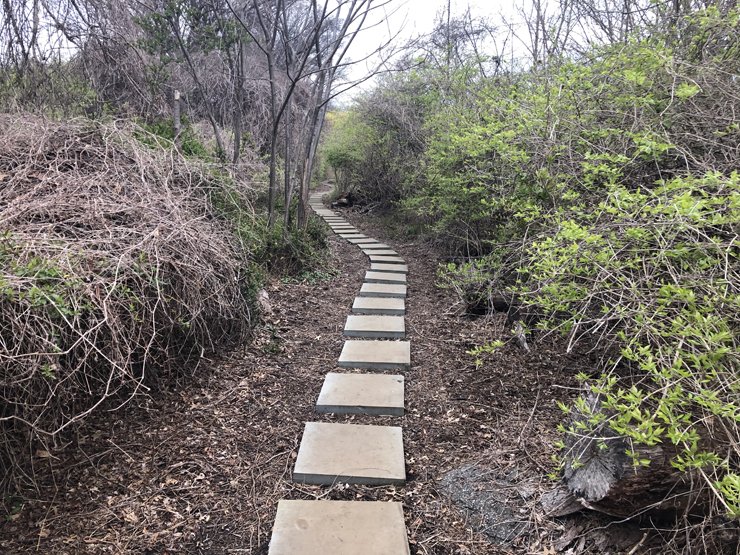 Sometimes in the evening we go on family walks to Willow Lake as well but the birding is not very good later in the day, as the park is frequented enough by teenagers looking for places to get away from their families for bit, other families out for a stroll, and joggers. It is also more difficult to maintain social distancing, especially on nice days. We may have to no longer go there in the evenings if the weather continues to improve and people continue to utilize the park. I think I’ll still be alright in the early mornings though. I really hope so. I like birding from my balcony but I don’t want that to become my only outlet unless I get in my car and drive somewhere.

We all have our coping mechanisms to stay sane in a world gone mad. Mine is, as it always tends to be, getting out by myself and enjoying nature.

Stay safe out there, practice social distancing, wash your hands, and do your best not to go insane. 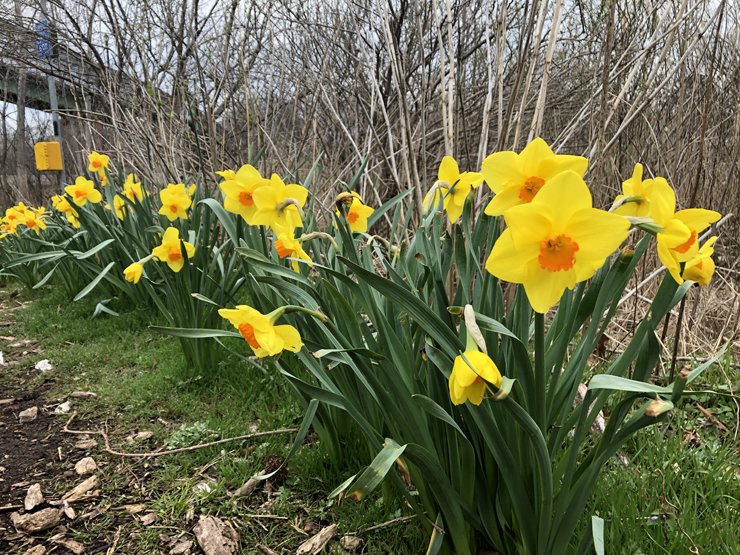 daffodils along the trail at Willow Lake Preserve