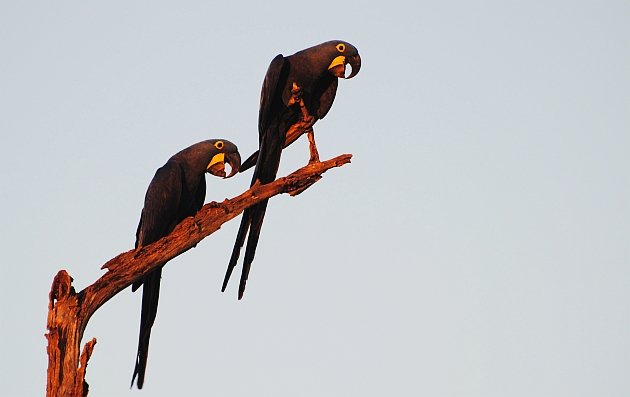 The Pantanal is a vast, seasonally flooded wetland — the largest in the world — in the southwest corner of the state of Mato Grosso in Brazil. Among birders, wildlife photographers, and nature enthusiasts, it is renowned for its incredible concentrations of birds at the end of the dry season. During this time, the fish trapped in the shrinking pools of water attract hordes of herons, egrets, storks, and other wetland species. The star of such huge concentrations is the massive Jabiru, towering over a diverse collection of South American waterbirds such as Sunbittern, Plumbeous Ibis, and Southern Screamer. Raptors such as Savanna Hawk, Snail Kite, and Black-collared Hawk and up to five species of kingfisher also join the bonanza in one of the world’s great birding spectacles.

Last year, I had the good fortune to be able to visit the Pantanal before my guiding stint at Cristalino Lodge. I quickly learned that everything I had ever read about the Pantanal was true — this was truly a birder’s paradise. Everything was easy to see and easy to photograph. Did you miss that perfectly perched Snail Kite or Green Ibis? Not to worry. There were always more just around the corner. The Pantanal was the type of place where ‘there is always more of everything’ seemed to be a recurring theme.

The Pantanal hosts a mosaic of forest islands and riverside forest which is home to an interesting assemblage of regional endemics such as Mato Grosso Antbird, White-lored Spinetail, and Pale-crested Woodpecker. It is in this habitat in which most of the near-endemic Pantanal specialties occur. Because of its excellent gallery forest and proximity to the southern portion of the Transpantaneira Highway (the highway that transects the northern Pantanal starting from the town of Pocone down to Porto Jofre), I chose to stay at SouthWild Pantanal (formerly the Pantanal Wildlife Center). The incredible lighting at dawn in the Pantanal is an experience in of itself.

I must mention one thing. Dawn in the Pantanal is absolutely spectacular — warm golden-yellow hues shoot through the trees and across a landscape that quickly wakes up with the calls and movements of thousands of birds. I started my day just outside the lodge, watching the commuting birds (with a special eye out for Golden-collared Macaw) and the feeders (Toco Toucan and Red-crested Cardinals were the stars among a supporting cast of blackbirds, pigeons, doves, aracaris, and others). Once the birds settled down for the morning, I explored the forest interior, consistently practicing my Ferruginous Pygmy-Owl imitation to draw in flocks containing Rufous Casiornis, Masked Gnatcatcher, and more. In the afternoon, I took a boat trip (the shores were teaming with birds and caiman) and ended the day with Band-tailed Nighthawks feeding over the river. I saw 98 species on day one without the use of a motorized vehicle — such is the bounty of the Pantanal. With a pre-dawn start down the Transpantaneira Highway, it took up until noon to finally reach Porto Jofre — such was the quality of the birding to be had along the road here. Unlike the more northerly segment of the highway, the southern Transpantaneira crosses much wetter, much more open wetlands that many species seem to prefer. As I was driving, I quickly noticed a red light among the reeds near the side of the road and stopped — a Scarlet-headed Blackbird, only one of two birds seen on the trip. The wide open fields along the way had multiple bizarre Southern Screamer and elegant Maguari Stork. The patches of forest here are also excellent for Fawn-breasted Wren, which can only be seen in this part of the Pantanal. As one drives south, the wooden bridges become increasingly rickety (with one of the long ones twisted sideways). Crossing them was like taking a leap of faith each time. Screamers are most closely related to waterfowl such as ducks and geese.

Halfway between SouthWild Pantanal and the northern terminus of the Transpantaneira, Pousada Alegre offers slightly more affordable lodging set within a working cattle ranch. Although birding here did not revolve around specific target species, it was still highly enjoyable — and the only place where I had Red-billed Scythebill. For the first time ever, I went birding on horseback to get deeper into the wetlands — certainly not great for seeing small birds, but in the Pantanal where many of the birds are large and conspicuous, this method works plus it was fun! I will also never forget the experience of rolling out of bed, walking down a couple miles and back, and having breakfast at around 8:00AM with a day list already over 100 species. The handsome White-fronted Woodpecker is at the northern edge of its range in the Pantanal.

Pousada Piuval was the last stop of my trip in this glorious wetland, just north of  the start of the Transpantaneira. Here, the landscape is not seasonally flooded for as long a period of time as points further south. Termite mounds are conspicuous, and many species more typical of the cerrado scrub-grasslands to the north and east are common, including Red-legged Seriema, Greater Rhea, Gilded Flicker, and more. It is also perhaps the best place in Brazil to see White-fronted Woodpecker, a specialty more typical of the Chaco of Paraguay and Argentina which occurs in small numbers at Pousada Piuval.

Alas, it was over too soon. My last sunset in the Pantanal was spent admiring a pair of Hyacinth Macaw, the largest parrot in the Western Hemisphere and one of Brazil’s great conservation success stories. It was a great way to end this part of my trip. 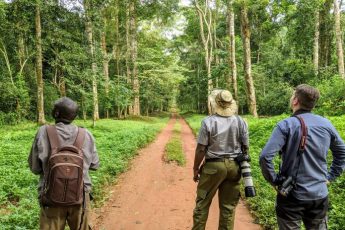