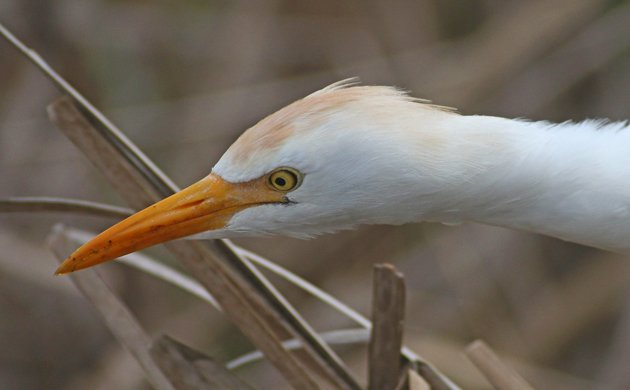 While I was at the Space Coast Birding and Wildlife Festival in January I spent most of one afternoon taking my time driving around the Viera Wetlands and digiscoping anything that crossed my path. One of the creatures that didn’t so much cross my path as follow it was a Cattle Egret that seemed to think my car was a suitable substitute for cows. And, when a Leopard Frog moved to escape my car, the Cattle Egret was proven correct. The frog was big but the bird was determined. The egret actually took its time at this point, and eventually flew off to finish its meal away from the clicking of my camera.

But I wasn’t done with Cattle Egret yet! I found two more clambering around in some reeds and quickly realized that they were finding an amazing bounty. Brown Anoles are a pretty squiggly meal. Well, until you crush them with your bill. Then it’s down the hatch! (I wish I had nailed the focus on this one.)

But lizards weren’t all that the crafty egrets were finding in the reeds. They were also finding tree frogs though I am not sure of the exact species. Whatever the species is, these tree frogs didn’t have a chance. Be glad that I am not sharing the image where the frog basically popped. Be glad you are not small enough to have this be your final sight!

Cattle Egrets: wreaking havoc with herps wherever they go!