New York has its famous Red-tailed Hawks Pale Male and, until recently, Lola. Cambridge, Mass has a celebrity raptor pair, too. Last winter, a pair of Great Horned Owls took up residence in a spiny locust (?) tree near The Dell in Mt. Auburn Cemetery. The nest was so tiny, flimsy and low to the ground that anyone walking by could clearly see the two owlets trying to grow up there. Photographers would stand directly beneath the nest, causing the owls a bit of anxiety. Finally, cemetery management put yellow crime scene tape up around the nest tree, something they’d been reluctant to do for fear of alerting even more people to the owls’ presence. 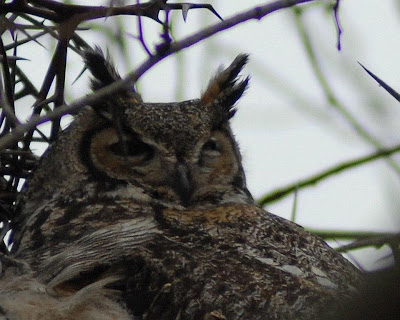 Cellphone photo of a post-breeding bird by Kris H. Macomber, who was not one of the personal territory violators. This owl just happened to be sitting very low and very close last week.

Here is the nest tree; the nest is a small aggregation of sticks on the first horizontal limb to the right. For an owl, that’s a very low nest. 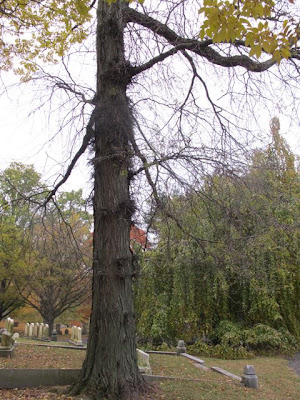 To make a long story short, despite having to learn to perch at a tender age thanks to their lousy little nest, both owlets fledged successfully and have delighted scores of visitors, including me. On our first mid-November visit, one was sitting, somewhat obscured, near the Dell. 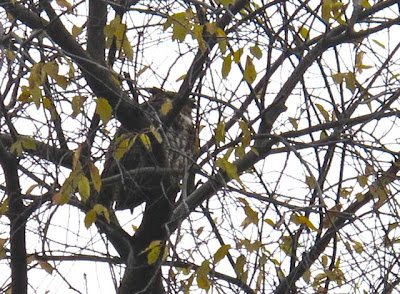 On our second visit, Kris’ eagle eye spotted one on the far side of the Dell. It’s the upright blip on the lowest branch on the right side of the bare oak, right above the notch at 12:00 in the golden weeping beech tree. 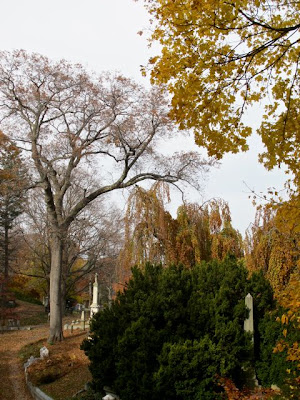 Another view, and this time you can see the owl right above the notch in the dark green yews. That’s a big bird, to be visible at that distance. 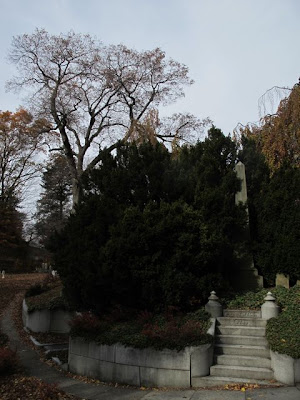 Of course, we walked closer, and found him looking stoic. 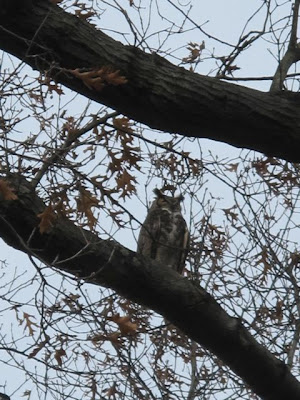 He needed to be a cool customer, because a young Cooper’s hawk had discovered him and decided to spend his morning pinwheeling around and cakking at the poor owl. 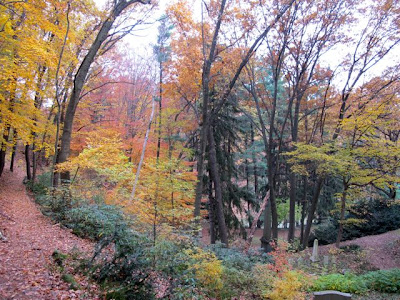 The Dell. Of all the spots in Mt. Auburn, The Dell is probably most representative of how the forest must have looked before it all went to ornamental rhododendrons and viburnums and Chinese tallow trees and Japanese maples. Little wonder the owls chose it.

Not far from the Dell, a faithful dog sleeps, hoping to meet his person in Heaven. Yes, I stroked his cold head. 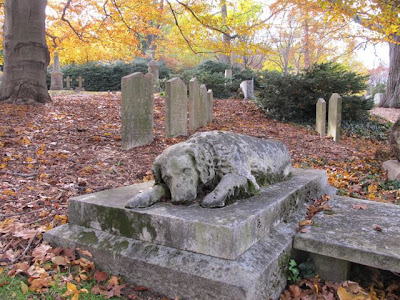 And Oliver Wendell Holmes (the poet and father of the super-famous judge) rests with his wife. 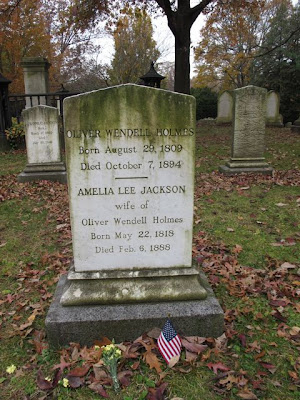 And beneath the owls’ favorite tree, a watercolorist rests. Hodge brought him mussels from the Maine coast. She’s thoughtful that way. Somebody else brought the periwinkle and the fir cone. It’s a thing, like the roses on Poe’s grave. 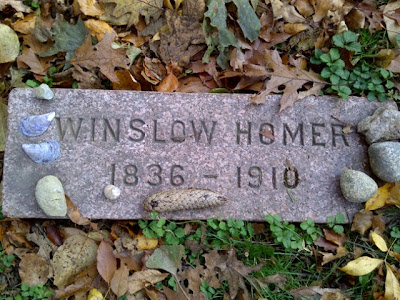 I knelt and soaked it all in, hoping some painterly genius might osmose through my palms.