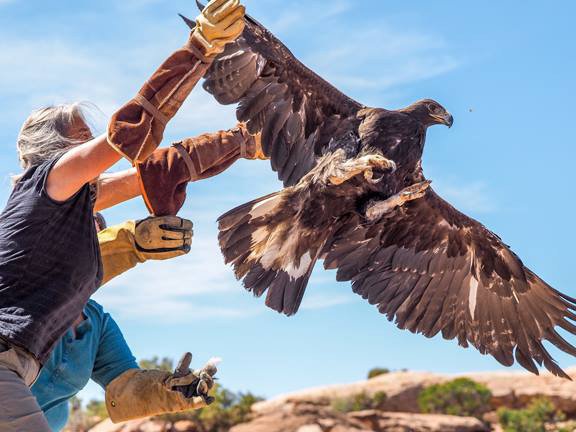 This guest blog was written by Debbie Souza-Pappas, the director and founder of Second Chance Wildlife Rehabilitation in Price, Utah.

After we took possession of an injured and weakened Golden Eagle from the vast desert area of eastern Utah, it became clear that the compound fracture of the tibiotarsus was the result of a steel-jaw trap. The trap was not attached but it was obvious this was the cause, and the x-ray confirmed it. It seemed whoever set the trap had ‘released’ the injured eagle upon finding him, as the bird could not have freed himself without the loss of the entire foot. The wound was also very contaminated with dirt and debris. This bird was lucky to be found and rescued by a Good Samaritan in this remote area. We immediately started the bird on Clavamox for infection, and Tramadol for pain. This was going to be a tough case. Since the exam revealed no other injuries, we determined this young male was a good candidate for surgery so the decision was made to attempt realignment of the fracture.

Our veterinarian, Dr. Jay D. Ipsen of Payson Family Pet Hospital in Payson, Utah, is our wildlife vet and very skilled at orthopedic surgeries. He has been our vet for many years and sees many of our patients in need of surgery. Dr. Ipsen determined that he would most likely repair the leg with a ‘ring fixator’ device. The ‘ring fixator’ is actually a hybrid of the standard type of fixator device. The original fixator was created out of need, as are so many amazing inventions. Though he had little orthopedic training, the Soviet Union’s Dr. Gavril Ilizarov was sent to care for injured Russian soldiers in Siberia in the 1950s, and invented the external fixator as a way to repair misaligned fractures and stabilize bones post-surgery. Newer devices have been further ‘tweaked’ to fit veterinary medical needs. They stabilize small fragments of bone and encourage some ‘up and down’ movement between fragments, keeping an adequate blood supply and allowing the bones to unionize. This process is known as distraction osteogenesis.

Thanks to his work, many people and animals have functioning limbs and can live productive lives. His inventions are still used in today’s orthopedic surgeries, and I’m sure Dr. Ilizarov would be thrilled to see how far his initial inventions have morphed into amazing medical works of art. We anticipate removal of the device around the end of March. X-rays will be taken before to ensure the bone has unionized. The challenge during these past 5 weeks since the initial surgery has been keeping this eagle still. With human patients, it’s easy – you put them in a hospital bed and tell them to ‘stay still.’ This wild animal knows he is not suppose to be in ‘our world’ and our mere presence is stressful, so as with all wildlife, we keep contact to a minimum. Still, that does not stop him from trying to break free. We have some ways to manage this, but nothing 100%. The true test will be next month when x-rays are taken. If that goes well, then we anticipate another 4-8 weeks for conditioning and evaluating him for potential release, which of course, is the goal.

All photographs by Debbie Souza-Pappas, including board member Sara Meinicoff’s San Juan County release of a Golden Eagle who recovered from being hit by a vehicle. Please visit Second Chance Wildlife Rehabilitation’s Facebook page and website, as well as the website of Payson Family Pet Hospital.

« Previous post
Where Are You Birding This Final Weekend of February 2016?
Next post »
Have There Been Any Positive Aspects of the Malheur NWR Occupation?