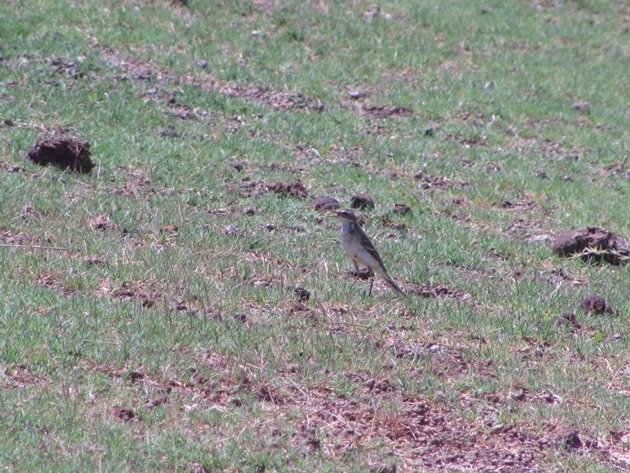 Another migratory species that we often find at this time of year is the Eastern Yellow Wagtail Motacilla tschuschensis and it frequents the grass of the sport grounds around town and the local ephemeral lakes. By the time the Eastern Yellow Wagtails arrive around Broome they are often quite pale, but sometimes there are some brightly coloured birds around. It is also important to check carefully for the rarer vagrant, the Grey Wagtail, which has also shown up here in the past. There is also the recent split, which allowed for the addition of a Green-headed Wagtail Motacilla taivana, and is a strikingly patterned species as an adult and not easily mistaken.

Last weekend we visited one of the local ephemeral lakes, which is rapidly drying out, to have a walk and then sit in the shade of the car for a few hours and watch the activity. Inland it was another 44c (112f) day with little to no humidity and the water body was a hive of activity. This is the same location where we had encountered the Little Ringed Plover a few weeks ago, but it appears to have moved location. Once again the Black-breasted Buzzards were sun-bathing and the variety of birds was incredible. When there is very little water available in the surrounding area this one place attracts a lot of birds.

We had only just got out of our vehicle when I noticed the Eastern Yellow Wagtail right beside where we had pulled up. It was actively chasing insects across the grassy area and completely relaxed about our presence. I took a few photos of the Eastern Yellow Wagtail before we went for a walk and you could really see it was finding it rather hot! It also kept an eye on the sky while it moved around the area it was feeding. Returning from our walk we positioned ourselves in the little bit of shade you can get from a vehicle in the middle of the day and watched the bird activity. The birds were completely at ease with our position beside the vehicle and we observed them from close range and occasionally through our binoculars and spotting scope. The Eastern Yellow Wagtail then chose to walk right towards us and I was able to get some closer photos with my compact camera. The Eastern Yellow Wagtail then chose to have a cooling bath in the water and I did manage two rushed photos of it as soon as I realised that it was not just going to the water to drink, but to get right in! So, if you would like to add Eastern Yellow Wagtail to your Australian bird list, you probably need to visit Broome from October to March! There is a sports field not far from the airport where you have a good chance of finding them!