That flamingos (Phoenicopteridae) and grebes (Podicipedidae) are probably each others’ closest living relatives is one of the most surprising discoveries in higher-level avian systematics over the last 15 years. The diving, piscivorous grebes were usually grouped with loons. Long-legged, long-necked flamingos have over the years been grouped variously with storks, waterfowl, and the stilts and avocets. But in 2001, Marcel van Tuinen and his colleagues published a DNA study of waterbirds that proposed a then-shocking sister relationship between flamingos and grebes, two groups “which otherwise show no resemblance,” the authors wrote at the time. (Image above depicts James’s Flamingos (Phoenicoparrus jamesi) by Pedro Szekely and a Horned Grebe (Podiceps auritus) by winnu.)

Since 2001, at least five additional DNA studies have upheld this proposed relationship, and in 2005, George Sangster proposed the name “Mirandornithes” for the flamingo-grebe group, from Latin and Greek roots meaning “wonderful” (also, “admirable”) and “bird.”

Some morphologists, notably Brad Livezey, Richard L. Zusi and Robert W. Storer, have been strongly critical of this novel proposal, insisting that such an unexpected result demands a strong body of evidence (I don’t think anyone would disagree with that) and that analysis of morphological characters better supports “the more traditional position” (Livezey and Zusi 2007).

As other scientists have examined the Mirandornithes hypothesis, however, they have found many important similarities between flamingos and grebes, beyond the consistent and mounting genetic evidence. The groups do, contrary to van Tuinen et al.’s surprised exclamation, show some resemblances after all.

Morphologist Gerald Mayr listed several of these in a 2004 paper. The list includes several similarities in the structure and arrangement of the birds’ spines, forelimbs, and muscles; also, both groups have 11 primary feathers on each wing, a characteristic shared only with storks (all other living birds have nine or 10) and a chalky coating on their eggshells composed of amorphous calcium phosphate, a characteristic known only from some groups within the distantly related Galliformes.

A 2006 paper by Albrecht Manegold pointed out two additional morphological similarities, the modification of the last phalange of the birds’ toes to a nail-like structure (visible on a flamingo foot here and a grebe foot here) and a characteristic of certain vertebrae.

Furthermore, a study of bird lice found that the lice that live on flamingos and grebes are closely related (Johnson et al. 2006) and suggested that this is because that the birds themselves are related.

There is potential behavioral evidence for a relationship too, despite the birds’ very different lifestyles and nesting activities. In voting to move the flamingos and grebes next to each other on the AOU’s South American list, Alvaro Jaramillo noted, “In terms of courtship, I have no idea if anyone has done any work, but some of the synchronized swims by grebes, and walks by flamingos are actually somewhat similar, including mechanical head turning and following behavior.”

Greater Flamingos (Phoenicopterus roseus) by Jochen Roeder (and see his description of their courtship dances).

While many saw these multiple lines of evidence converging on one conclusion, Brad Livezey, up until his untimely death in a 2011 accident, maintained a very different perspective on the evidence. He published in 2010 an angry-sounding paper denouncing what he deemed a “pervasive, unsupported superiority conferred upon sequence data” and “intransigent prejudice” leading to the growing acceptance of the Mirandornithes hypothesis and arguing instead that evidence best supported a flamingo-stork relationship and that “procedures for rational synthesis of evidence are needed for progress during this challenging but promising period of diversified phylogenetics” (Livezey 2010).

In 2012 came an exciting new discovery: a fossilized nest. Modern flamingos build mud nests for a single egg, while modern grebes build nests of vegetation for multiple offspring. The eggs in the fossilized nest showed structural characteristics of the shell known only from modern flamingos. But there were five eggs, and the nest was made of twigs — a grebe-like nest from an ancient flamingo (or, in the authors’ terms, a “basal phoenicopterid”) (Grellet-Tinner et al. 2012).

And so today the accepted scientific view is that the DNA, morphological, and fossil evidence — including studies of birds known only from the fossil record that show characteristics of both flamingos and grebes (e.g., Palaelodus) — “firmly establish[es]” (Mayr 2010) the once-controversial idea that the six species of wildly ectomorphic, filter-feeding, brilliant pink flamingos and the 20-odd compact, hunter-diver, more subtly colored grebes are each others’ closest living relatives.

And that is wonderful indeed. 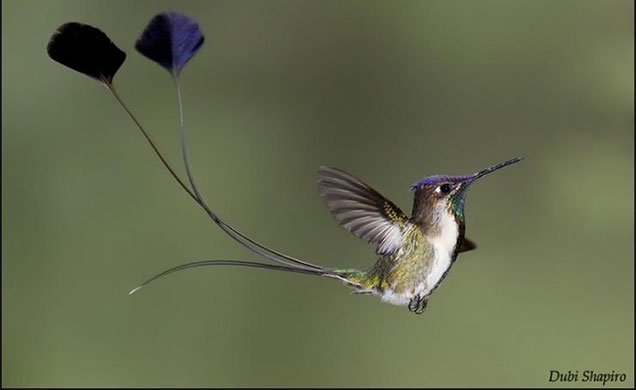 The Marvelous Spatuletail on Display!