I have yet to meet a birder who did not consider dippers to be special. Any dipper, any continent, any birder. This special place in a birder’s heart or on a list of best birds of the year certainly pertains not only to their extravagant lifestyle but also to the fact that most birders – particularly visiting birders – often struggle with finding them. I know for a fact that a certain birder from the US only joined an esteemed bird blog and blogged like a madman just so he would eventually be invited by makers of fine optics to Austria where he would have a chance at seeing his lifer white-throated dippers. Crazy, I know. And you know what? Here in central Europe, dippers – more precisely the White-throated or European Dipper – are rather common breeding birds in many areas. In Germany for example, they are breeding in practically every hilly or mountainous region south of the North German Plain and are not really rare if they occur in a certain region. Also, they are rather easy to track down since they favour fast-flowing areas of small creeks and streams that have rocks, small rapids and so forth. Now, this as a primary habitat is difficult to find outside the higher mountain ranges, like the Black Forest, the Alps or the Bavarian Forest, and once found even more difficult to access and search. However, dippers here in Germany aren’t too fussy about their habitats and will readily utilize human-made secondary rapids and rocks. To us humans, those “rapids and rocks” are weirs, concrete bank reinforcements, small bridges and other comparable structures often within villages. Therefore, it is not too far-fetched to call our dippers a commensal species not entirely unlike House Sparrows or Starlings. Of course dippers are not that common and thus harder to find in Germany than those aforementioned species. But that is very much the effect of their linear territories, with even favourable areas usually having no more than one pair per kilometre of creek/river.
So why is it that birders often struggle with seeing dippers even in Germany where they are rather common? Well, that is actually quite easy to explain. The habitats frequented by dippers are habitats not frequented by birders. There simply is no reason at all for a visiting birder from overseas to drive to those small creeks in hills and mountains and scan rocks from bridges except for seeing dippers. Their habitats are not found in the usual hotspots, e.g. amongst the high summits of the Alps, the wetlands and large lakes of the south, or the northern coasts. The same applies to local birders: if you’ve seen dippers a few hundred times, you prefer searching for vagrants to seeing a dipper for the few-hundred+1th time. Hence, dippers are seen much less often than their population numbers would suggest, both by visiting and local birders.
This may explain why I – having probably a dozen dipper territories within half an hour’s drive of my home in Germany’s South – jumped at the opportunity to go and chase down dippers while I was in Berlin recently for two days. Ridiculous really, but there you go. Now, according to what I wrote above, there really shouldn’t be any dippers in Berlin, right? There are in winter. You see, we get two different subspecies of dippers in Germany. The one that is breeding here, as described above, is the subspecies Cinclus cinclus aquaticus, a form the English speaking world calls “Southern European Dipper” according to Wikipedia. A silly name from a German prespective. Anyway. This form is found in Germany all year, with some birds venturing down to lower altitudes in winter, but not really expanding onto the North German Plain. Really, they pretty much stay in their territories all year. However, the far North of Germany gets a second subspecies each winter, the so-called “Black-bellied Dipper” which is the nominate form (triple-C) from Scandinavia. These northern birds are not at all common though, which is easily explained by the general lack of slopes and therefore fast flowing water in Germany’s North. However, even those northern birds are not too picky and will utilize human-made structures that mimic their natural habitats. Therefore, those very few northern winter guests that reach Germany are concentrated in our largest northern German cities, Berlin and Hamburg. In the winter of 2016/17, dippers were regularly seen in Berlin along a small canal near the centre of the city, most easily along Uferstrasse (aptly named “shore street”) which flanks the canal for a few hundred metres. This is the place I hit one morning two weeks ago and where I was happy to immediately find two dippers. So far as we know, those northern dippers visiting Germany in winter show a significant degree of site fidelity. It is thus likely that Uferstrasse, which is around 3 km north of Berlin central station, is a rather dependable location for visiting birders to see dippers in Germany should they fly into my country any time between mid-November and the end of March and have an hour to spare before moving on to their destinations here. If you do and you want to give those Berlin dippers a try, just drop me an email so I can check if they are still around. 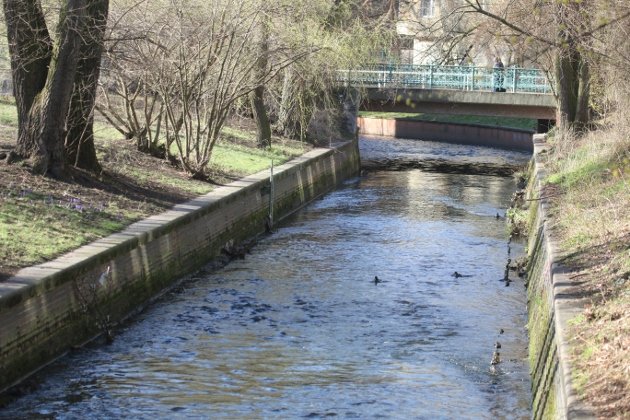 The canal parallel to Uferstrasse in Berlin where dippers were frequently seen during the winter of 2016/17. 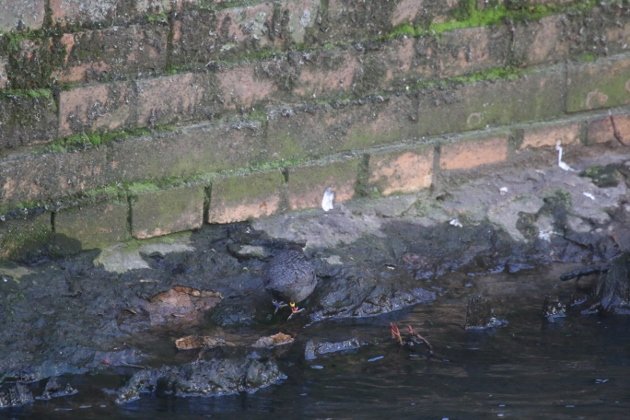 If dippers were stealthy and motionless ambush predators, they’d be hard to spot. 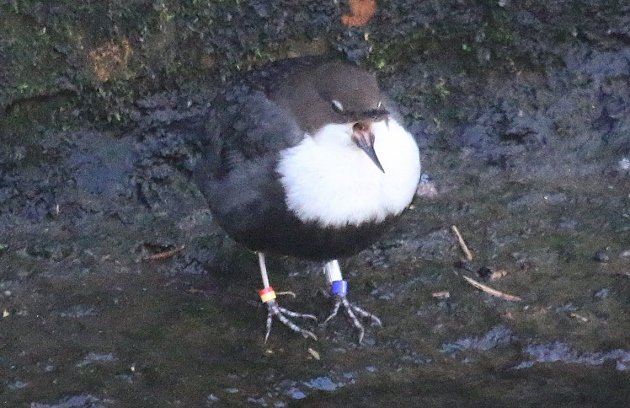 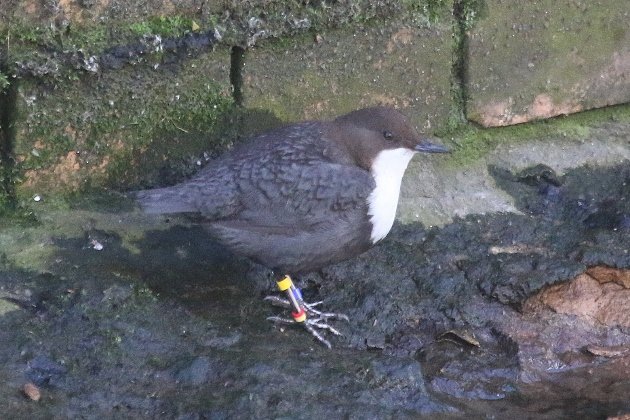 Many wintering “Black-bellied” Dippers in Germany are colour-banded to investigate numbers and site fidelity. The canal depicted above was often frequented by two dippers at a time, and it was only through colour bands that local birders established that not two but four birds were involved.

And of course, you can’t have a dipper post on a birding blog without the dip. Fan service: 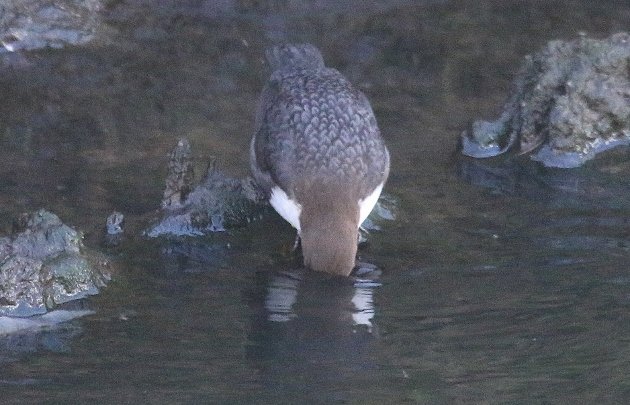 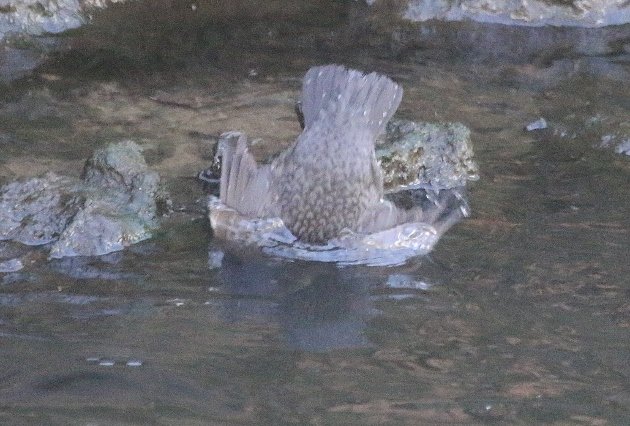 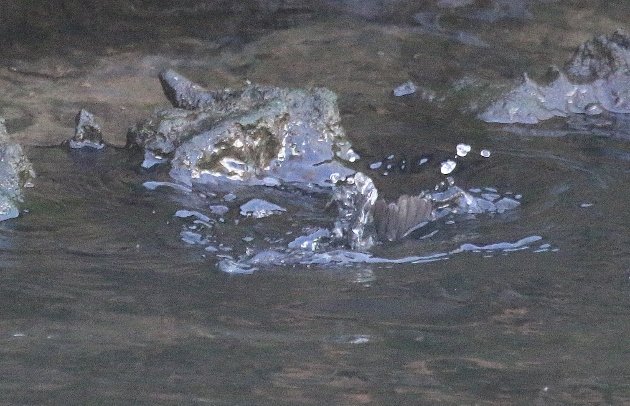