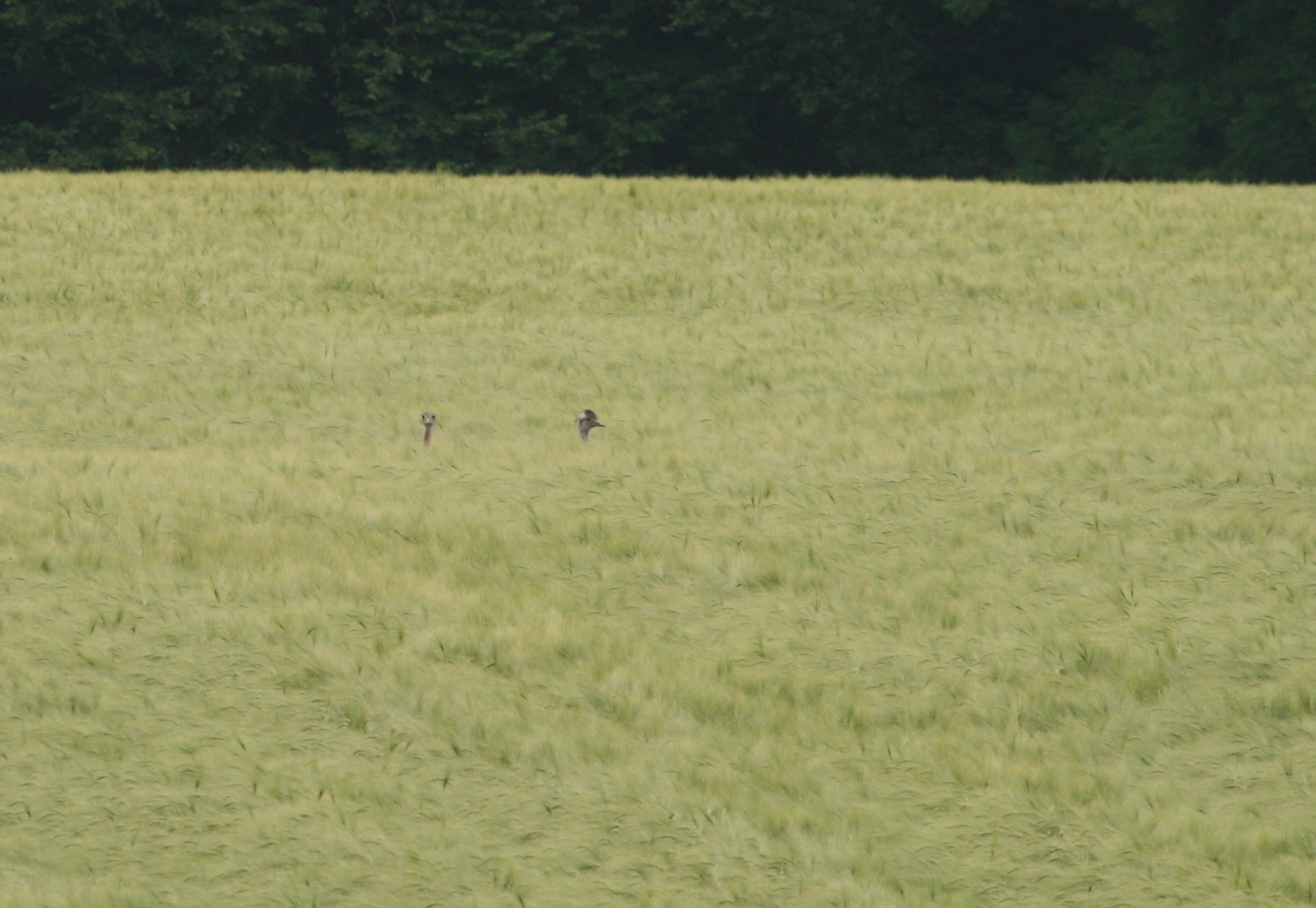 Germany is underrated as a birding destination. Nestled right in the middle of Europe, we have a little bit of everything, a nice cross section of Europe’s avifauna. We have, for instance, very beautiful birds, like European Bee-eater,  Blue Tit, and Kingfisher. Then of course, we have amazing birds such as Wallcreeper, Hoopoe, and Black Woodpecker. For sure we have great birds like Great Crested Grebe, Great Bustard, and Great Spotted Woodpecker. And since the year 2000, we have an even greater bird, the…

Greater Rheas, a species the Germans call Nandu, are very popular in Germany and frequently kept in zoos as well as private enclosures. It is not unusual to drive by a farm building and see a bunch of Greater Rheas on the farm’s fenced-in pasture next to sheep or goats. Therefore, some will occasionally escape and roam the land until they are – inevitably, as they are large and cannot hide very well in the open landscapes they frequent – caught again by their owner. The following map (taken from the highly esteemed site ornitho.de) shows all observations of Greater Rheas throughout Germany since 1999. You can see mostly small dots, indicating single individuals over a short period of time. Observations of Greater Rheas in Germany since 1999 – map generated with the fabulous online data base ornitho.de

However, one escape near Lübeck was different, indicated by the large red conglomeration, and it happened way back late in the year 2000: The birds broke free from a private enclosure again, but this time the escape involved not one but seven birds, three males and four females. Furthermore, the enclosure they escaped from was located next to the former inner-German border, a sparsely populated area with expansive fields and the floodplains of the river Wakenitz nearby, which are quite difficult to access. Therefore, the birds successfully evaded all attempts at retrieving them, and were eventually “given up”. People (their owner, police, local authorities etc.) simply assumed the birds would soon die off and that this would be the end of it.

Turns out, it wasn’t. On the contrary, the birds were quite satisfied with their new-found freedom and realms, and started breeding immediately after their escape in the spring of 2001, much to everyone’s surprise. This may not be Argentina, but it’s apparently close enough.

They have bred successfully every year since, and have mastered drought conditions, torrential rains & floodings, mild winters, harsh winters, hot and cool summers,… You name it, they’ve made it through – all the while reproducing as if there was no tomorrow. Their current population stands at more than 150 birds (I have no recent population estimate, but there were 129 in 2012, up from 100 in 2011), and they are spreading slowly but consistently.

It seems they’ve come to stay. Moving through dense fields along tractor trails is moving smart – when you’re a really big bird!

By the mid-2000s, when we had overcome our surprise about their surviving and prospering, and after it was clear the Nandus weren’t going to just disappear, discussions began amongst conservationists as to what should be done. Now, German ecologists aren’t stupid. They know where New Zealand is, have heard of Emeral Ash Borers and are aware who is wreaking havoc on island sea bird colonies and elsewhere. Clearly, the birds had to be removed, the sooner the better. Or not?

This is where the fact that German birders are humans comes into play (and they sure aren’t the only ones). The Rheas’ occurrence was such an oddity, so unexpected and thus so overwhelming that almost all parties involved couldn’t bring themselves to condemning their presence. Whenever calls for their removel were uttered, a louder voice would proclaim that they might be very beneficial grazers on the open floodplains of the Wakenitz, preventing bush encroachment on the meadows that were too remote or swampy to be grazed by domestic animals.  Furthermore, while they are undoubtly alien, doubts were brought forward that they are, indeed, invasive. Truth be told, we don’t know if they have any negative impact on our native flora and fauna. Their ecology in Germany is being investigated, but the results have so far been inconclusive. We think they might have an impact on ground-nesting birds, but there is no data supporting this. They might have a negative impact on local flora, invertebrates and small rodents, either directly or indirectly through competition for food. But again, there’s no data to back it up. Their range is still small, although they are expanding, and they do occur in nature conservation areas, although most of their foraging takes place on grainfields. They have a negative economic impact through damaging crops, but this is likely off-set by them being a tourist attraction.

What to do? Well, even the German federal agency for nature conservation (BfN) isn’t so sure about it, and have included the Greater Rhea on their “grey list” of invasive species, a list comprising “potentially” invasive species that should be monitored.

Very interestingly, the BfN considers them established. Can German birders count them? Well, “it’s your list” but officially they can’t. The Deutsche Ornithologen-Gesellschaft (equivalent to e.g. the AOU) only considers species as established after they’ve survived in the wild for more than 3 generations (amongst other criteria). And while everyone agrees that the Greater Rheas will not go away by themselves or natural causes, birders will have to wait for quite a while due to the species’ lifespan of more than 10 years. We therefore expect a major influx of birders to the Lübeck region sometime around 2035. I’ll be over 60 by then. « Previous post
Where Are You Birding This Final Weekend of July 2014?
Next post »
Feral Pigeons World Wide