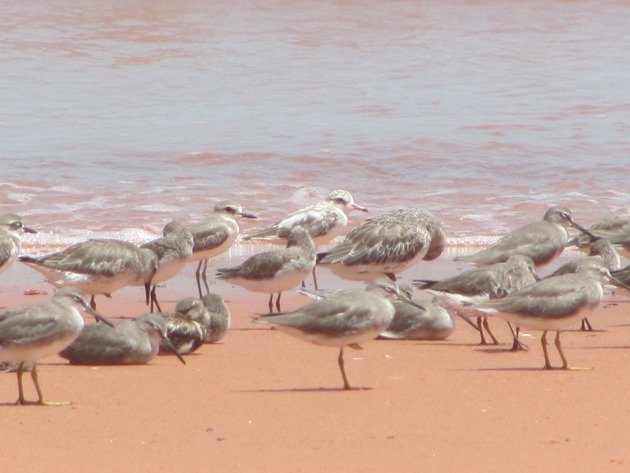 Over the years that we have birded we have observed some variation in the plumage of birds including a Crimson Finch that wasn’t crimson, but orange. Among shorebirds we have observed a white Red Knot, which was completely white and really stood out on the beach. We are also very much in tune with the local beaches and the tides and which species you can expect at different locations on different tides. This is very useful if you are looking for a particular bird species or even an individual bird. This might seem incredible, but with the individual marking of shorebirds both here and overseas then an individual bird can be found time after time in the same location. A fine example of site faithfulness in shorebirds can be shown by the Grey-tailed Tattler “35” that was flagged in Taiwan in August 2012 and has returned to our local beach during the non-breeding season for five years now.

Late last year on December 29th we noticed one of our locally marked Greater Sand Plovers no longer had normal plumage. We had not been to the location where this particular Greater Sand Plover usually roosts for a couple of weeks and we were amazed at the change in the plumage, but more particularly the change in its leg and bill colour. The stand out feature was the pink legs and the pink bill apart from the very tip of the bill that remained black. You can see the oddly coloured bird in the header photo on December 29th 2016. The black tip on the tip of the bill is a feature you would expect on a Black-fronted Dotterel, but not a Greater Sand Plover! The plumage was also very pale especially in comparison to other Greater Sand Plovers in the flock and significantly pale compared to what it had been in the past. Due to the fact that the Greater Sand Plover has an engraved leg flag reading “LBR” it has been possible to not only keep track of it, but we also know that it was in its second year of life in 2012 when it received the flag. Although a bird can be albino or leucistic it would imply that this Greater Sand Plover has not got either of those conditions due to it being several years old when this abnormal colouration began. 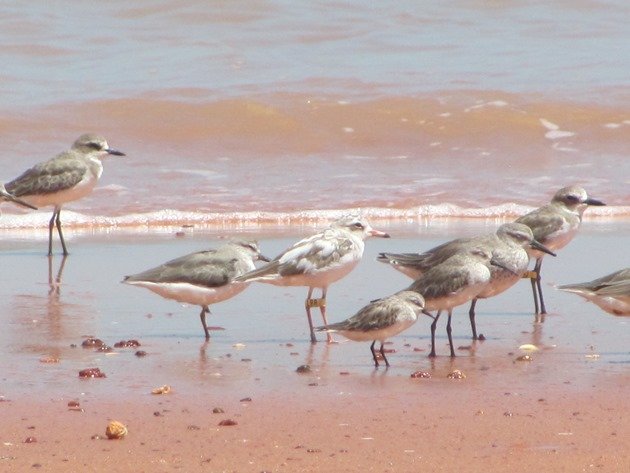 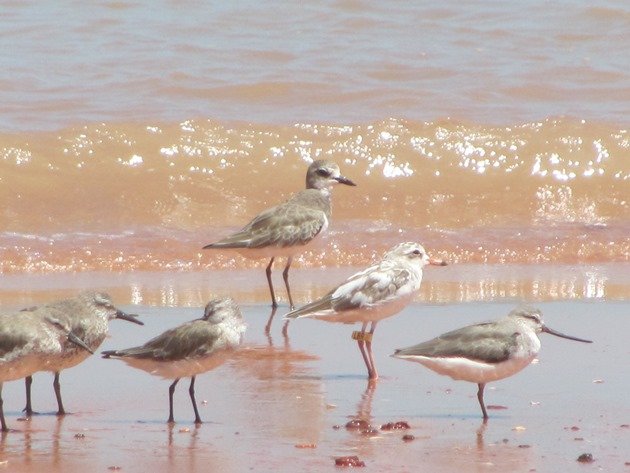 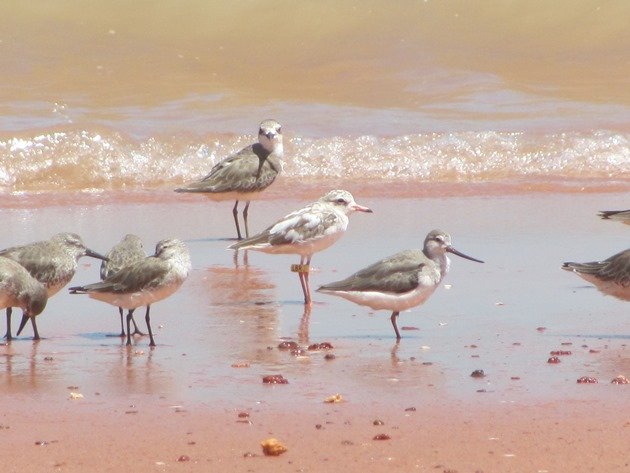 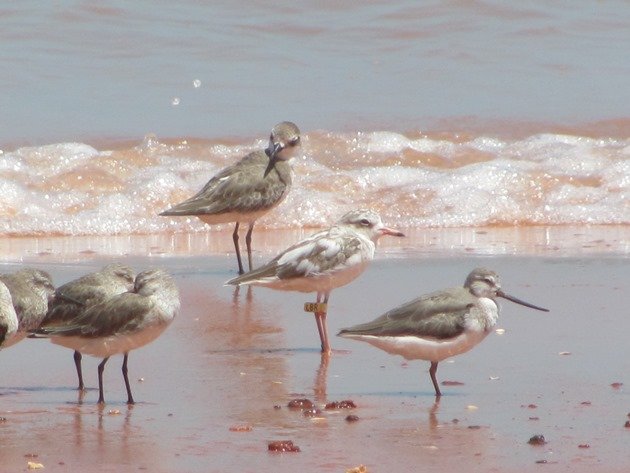 Over the following weeks we have observed Greater Sand Plover “LBR” at roost after high tide and watched with interest the changes to its plumage and the colouration changes in its bill. By January 15th 2017 the Greater Sand Plover had a completely pink bill with no evidence of it ever being black. The plumage was whiter and the bird looked perfectly healthy. It is a typical Greater Sand Plover, but with abnormal colouration. What has become interesting to watch is the reluctance for it to stand close to other birds, or for them to stand close to it. There appears to be an invisible circle around it where no other birds stand or sit. Our observations this past week have seen the Greater Sand Plover stood alone in the middle of the flock of shorebirds or sat at the back of the flock. This is extremely handy when you have a small camera, because it soon picks it up! These following photos were taken February 12th 2017. 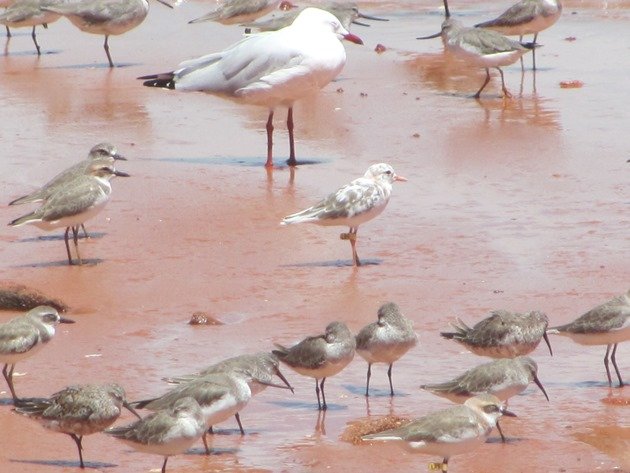 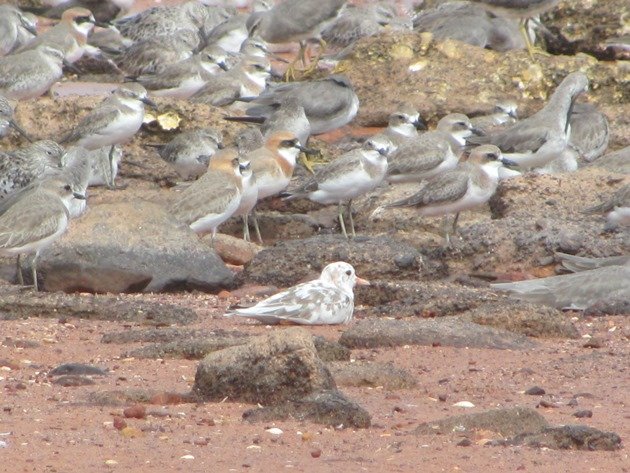 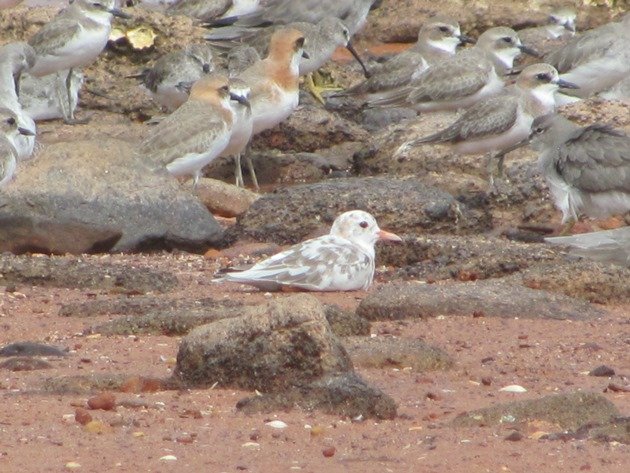 We have been able to observe that even the toe-nails are pale now, but there is an indication of a change in the plumage now. There are a few brown feathers present on the head area and also the back of the neck of this Greater Sand Plover and we expect that it may continue to change into something resembling breeding plumage over the coming weeks. What we hope to discover in coming weeks with this individual Greater Sand Plover is whether the legs and bill change from their pink colour to black again or even a darker shade of pink. I will have to update you as the weeks go by! No doubt it will migrate in a few months’ time and hopefully return later in the year for us to observe and discover any further changes to its colouration. It is an interesting Greater Sand Plover to observe!

It appears that it may be having a problem with the synthesis of melanin, but it does not appear to have any other problems regarding gaining weight or being feisty! There is an excellent article by Sibley on melanin reduction online. 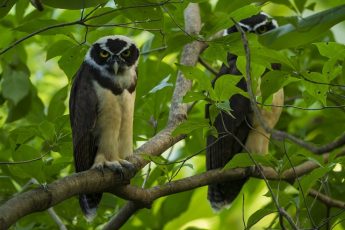