In a warm Catalonian March (I was about to say Spanish, but among quite a few flags, I haven’t seen a single Spanish one), Barcelona was filled with sunlight and full of Rose-ringed and Monk Parakeets, two charming but alien and invasive species. The year was 2013 and despite all that sun, I have spent days in a darkened Museu Blau (blue only on the facade, but black inside, almost gothic) with a rather interesting natural history collection (the most interesting question was – how many of those specimens have I seen in the wild, alive and kicking) on a pan-European bird atlassing workshop hosted by the Catalan Ornithological Institute.

It is the last day and the final presentation – I am taking binoculars out, coffee – goodbyes to the colleagues and a great workshop and off I go to meet Steve West, a local guide, and explore the area. 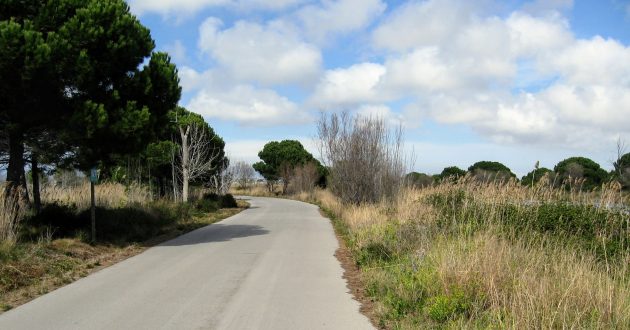 First stop is the nearby Llobregat Delta reserve, a network of canals and pine forests squeezed in between the airport and industrial plants. The road follows the riverbank overgrown with reeds. On the opposite bank, European pond terrapins are basking in the sun and, behind them, a herd of horses is grazing, preventing the scrub from taking over the grasslands. Somewhere near, among the reed stems, a Cetti’s Warbler is singing, but is too shy to show itself.

At a parking lot, Steve hears the song of a Sardinian Warbler (a species that I have rarely observed, often after the breeding/singing season, and as a rule, half-hidden in the foliage) and plays it back from his phone, so the warbler might be tempted to check which other male dares to enter his territory. And indeed, a slender grey bird with black tail and head, red eyes and legs, comes to within a few meters of us to check us out.

Near us, a bus stops and a group of about 30 Irish birders heavily armed with binoculars and scopes climb out… a sign for us to look for a more secluded spot. As we enter the car, a Sardinian Warbler sings behind us, laughing out loudly. 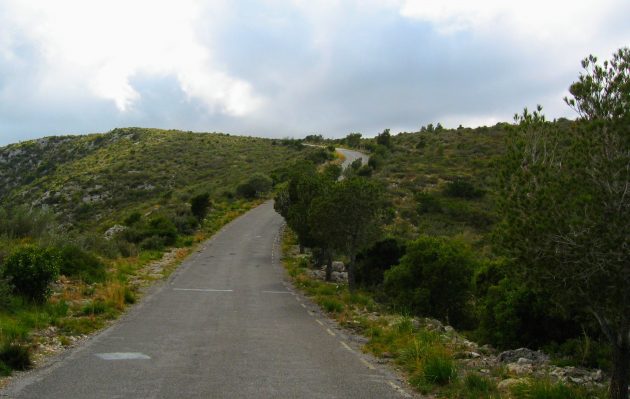 Through the Rat-penat houses, enveloped in their lush green gardens, the road winds up the edge of a limestone gorge towards the Garraf nature park (pronounced a bit like barking, garrrrAf). We stop at the top of the plateau … a migrating Osprey makes a quick appearance (this isn’t the proper habitat for this species), only to disappear before I manage to see it. I hope it will show again… and there is a raptor with a strong pale and dark contrast… the same Osprey? Steve answers: Bonelli’s Eagle! Still, the bird isn’t too cooperative, glides low over the ridge and disappears behind it. A pair of these eagles breed nearby, but this bird shows no wish to reappear and show itself better. The sky is grey, the wind cold and I put my fleece on – which doesn’t help much if you drive with widows down, trying to hear birds.

At a lonely housing estate for those who want to get away from the city, suburban birds such as White Wagtail, Spotless Starling and Eurasian Magpie (the only crow species I have seen in Catalonia) await us. From there, we continue along a well maintained dirt track, where one Eurasian Blackcap awaits on a bush by the road and a few Barn Swallows are chasing insects… In the bush around us commonly grows the only indigenous palm of Europe – dwarf fan palm (below), barely reaching the car window height. In the valleys below, are small pine forests. Still, birding is a bit thin – it is still somewhat too early; the real migration should start some two weeks later, in early April. 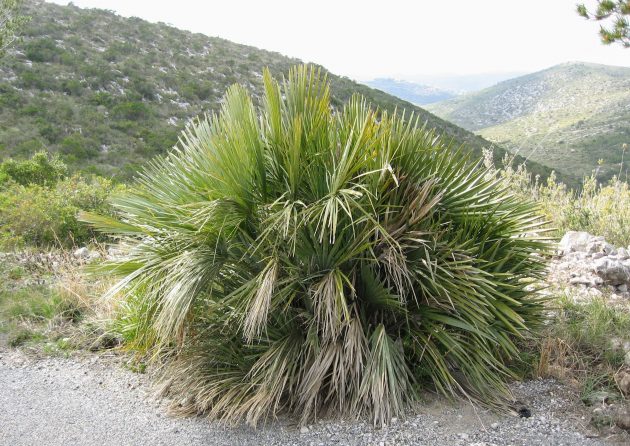 There is an eagle high in the sky, too far for me, but Steve can tell a Short-toed Snake Eagle (this is his home turf and he knows which species to expect)… somewhere from the bushes comes a song of a Dartford Warbler. This one is a lifer for me, but I can only hear it – it is nowhere to be seen.

Steve uses his phone again to lure the bird… and it appears, but only barely, checks on us and immediately disappears back into foliage. Then it flies again, maybe a meter above the bushes, for a split-second to show its long-tailed silhouette and it is gone, usually into a bush that is itself hidden by another bush. Than it lands on a nearby branch… I try to find it with binoculars, there it is, just a second to focus… but it is already gone. It lands again; I try to locate it with binoculars, but it is gone too soon. I give up, trying to observe it with naked eyes only, it is fluttering its wings in mid-air, lands on a bush and… stays there for several seconds, long enough for a good – if brief – view through binoculars, so I can see its red eye and spotted red-wine coloured breast… before it disappears, but I am no longer chasing it. Enough is enough. 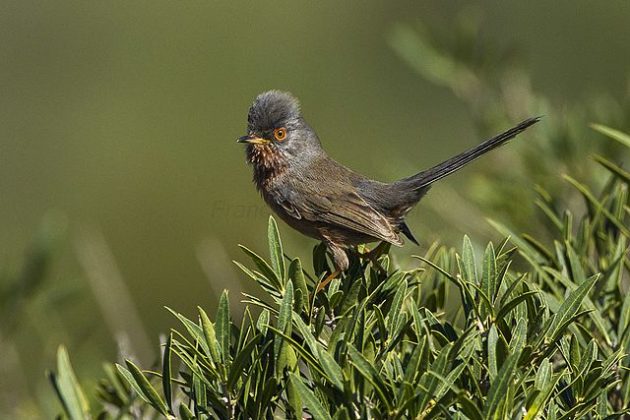 The dirt road winds along hillsides, next to vineyards and through the pine forest with a lot of bat boxes. Still, one pine is full of birds, Common Chaffinches, European Goldfinches, European Serins – a mixed flock of at least a hundred birds. We stop by a meadow, to check on a possible Red-legged Partridges (the only ones I have seen were an aliens introduced in the UK, so I cannot count those), but no such luck… a song nearby… the European Crested Tit! Back home, I have to search damp and cold high mountain forests to find one, and here it is at less than 400 meters a.s.l, right next to us.

We are nearing a village, where a Black Redstart keeps an eye on us from the top of a drywall, and drive through narrow streets to join the coastal road, where a cliff overgrown in a pine forest beard awaits us – Falconera, at the entrance to the Garraf village. The afternoon sun is getting lower and golden light reflects against the cliffs rising from the sea. On a small ledge, a Peregrine Falcon stands and looks towards us, framed by the cliff on its left, and the blue of the sea to its right. I think that this one is probably my best looking Peregrine ever.

Than we go around the Falconera, into the marina and under a low cliff above it. There are dozens of Eurasian Crag Martins above it, while a female Blue Rock Thrush awaits us on the cliff. One cheeky Common Starling lands right next to her, even showing some bluish iridescence, so much so that at first I had thought it was the male Rock Thrush (cover photo). Yet, a real male thrush has no understanding for this intruder and appears from somewhere to chase the starling away… a short aerial combat… and peace returns to the cliff.