How Close Is “Too Close” To An Owl? 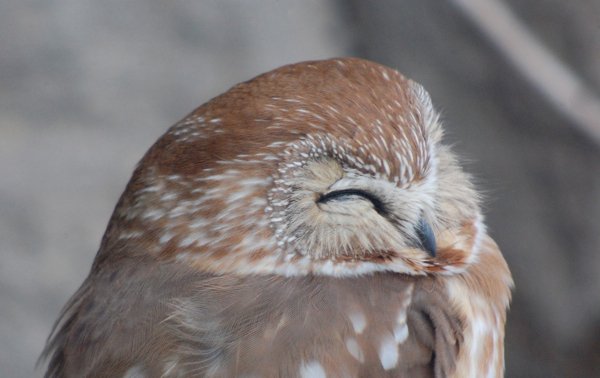 I had an interesting email come in this winter:

“I have been photographing birds for the past 8 years and have been confronted by numerous “Rude Birders.” My question that I hope you can help me with is what would be considered a safe distance to photograph Northern Saw-what Owls? My practice has normally been 6-10 feet from the subject since i have a 300mm lens.  Would this be considered a threat to these owls?”

My initial reaction in my head was, “Yikes! Six feet from a saw-whet? That’s bananas! How can you not think that not too close???”

But then I took a moment to breathe.

First I applaud the photographer for actually asking the question of how close to get to a Saw-whet Owl. Let’s face it, any of us with the budget can go out and take photos and even get them published. With casual bird watchers out numbering hardcore bird watchers, people with a camera and an interest in wildlife are not going to have all the facts about wildlife before they go out. And quite frankly, I’ve seen some of the most dedicated of ethical birders get excited at finding an owl and get closer than they should. Sometimes it’s not our fault, how many times have we been in pursuit of some tiny bird only to have a heart attack when we flush a Long-earred Owl that was only a few feet from us that we had no idea was there? So, how close is “too close” for an owl? We can really ask the question and get a definitive answer from one. And different owls are going to have different tolerance levels. It helps if you can understand owl behavior. I worked with education owls for over ten years, from Great Horned Owls to Saw-whet Owls (above bird). Granted those birds had a very different outlook on humans than wild owls, but there were times they were stressed and a good program person can read those signs and know when to end a program when the owl needs it.

For example, the above saw-whet looks like its sleeping because that’s what owls do during the day and its eyes are closed…not exactly. Owls, especially smaller owls hide during the day to avoid other predators like larger raptors. Hiding is the way to stay safe. Sure they can fly, but their not going to be as fast as a Cooper’s Hawk or even a Red-tailed Hawk. And let’s not for get the opportunistic Barred Owl. Hiding is the way to go for these tiny owls. Their feathers go a long way to hide them, but their eyes are large and bright yellow. Closing them allows the mask their eyes and complete the camouflage. They stay put because that’s safe. So they may seem oblivious to a lumbering human with camera equipment, but that’s only because hiding is how they try to evade predators.

Perhaps you’ve heard of the Transformer Owl Video? It’s a small education Northern White-faced Owl that completely changes shape as zoo keepers bring by other types of owls that would be a predator for that species. For the only slightly larger Barn Owl the bird puffs itself up to look fierce and like a foe to be avoided. For a much larger Eurasian Eagle Owl, it compresses to look like a branch, even aiming it’s more bark like wing feathers towards the predator and closes its eyes, to complete the disguise, small owls will do that with us too.

Here’s another thing to watch for: When I was at Estero Llano Grande in the Rio Grande Valley in early April, there was an Eastern Screech-Owl perched at the opening of an owl box right along one of the trails. The advantage of my digiscoping set up is that I can be a good distance away and see the birds very well. The box is in the tree, towards the top where the trunk creates a “Y” shape. Here’s the view of the owl: Note the eye on the right, a tiny slit is open and you can see the pupil. This owl isn’t sleeping, it’s watching what I’m doing. That’s a sign the owl is aware of you and that maybe I’m too close for its comfort. That bird is not relaxing, that bird is trying to hide from me. Here’s the thing, you know you’re not threatening when watching birds, but to the owl, there’s a large thing, staring at them–a spotting scope looks like one big eye. All an owl knows is that when they stare at something, they’re trying to figure out if they can kill and eat it.  They don’t know that’s not on your agenda. We all love the shots of an owl like this Great Horned Owl staring at the camera.  We love those eyes.  But if an owl is staring at you (and you haven’t just made a sound like a squealing mouse to get them to look at you), you’re on their radar and perhaps too close and may even be stressing them. You want the owl to look at you as little as possible, that’s a sign that you are not bothering them. If you have an owl that is oblivious to your presence like this hunting Boreal Owl,  you’re doing ok. Sure, it may not be the head on shot…but there are a ton of those out there already, maybe try for the more natural oblivious owl shots. And keep your distance.

How about you? What do you use as your guideline for how close to get to an owl?