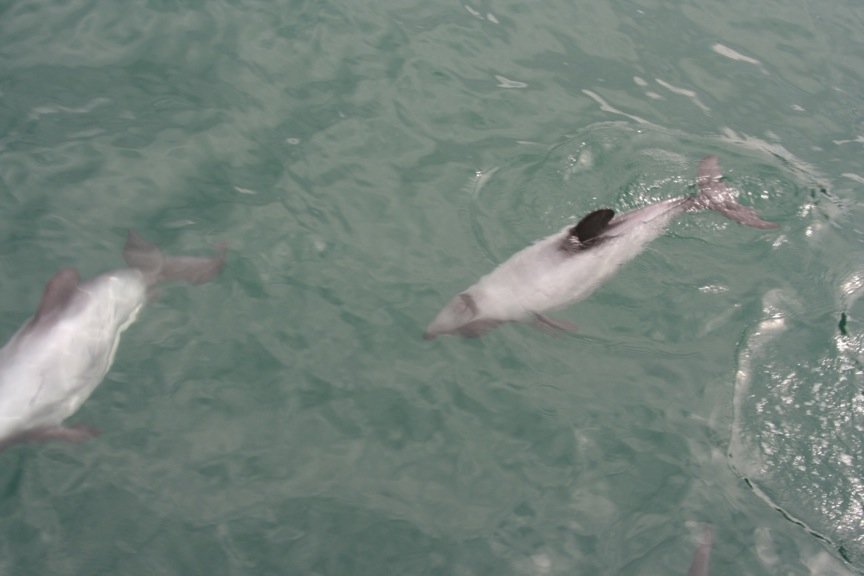 People ascribe near mythic status to the members of the family Delphinidae (and other related families). Even people with no other interest in wildlife, who couldn’t tell a sparrow from an ostrich (or even a dolphin from a fish) love dolphins. Which has always mystified me slightly. Dolphins are basically just smart sharks that breath air. Sure, you might say that sharks eat people and dolphins don’t, but most sharks don’t eat people, and we can’t rule out the possibility that dolphins are simply better at doing it without getting caught. Now don’t get me wrong, I like dolphins. But I like sharks too, in fact given the choice of swimming with a shark or a dolphin I’d take either, but secretly I’d want the shark. I was once lucky enough to swim with both at the same time. But still, I’m hardly normal, and people do love swimming with dolphins.

If you love the idea of swimming with dolphins, New Zealand is a great place to do it. I had my first swim with Inshore Bottlenose Dolphins in Northland’s Bay of Islands back in 2000, and it was a tripy experience. Unlike sharks, dolphins use sonar, and if they are sufficiently interested in you they well turn their sonar location system on you and you feel the clicks through the entirety of your body, it’s quite something. There is also something quite otherworldy about hanging around with something that is as smart as a dolphin but isn’t human; I’ve had a similar feeling when spending time around wild chimpanzees. It may be part of the reason I find them unnerving, it is only the smart creatures that can do actual bad things, instead of just wild animal things. And dolphins can do bad things. Like I said, at least the sharks are honest in their sharky ways. Nevertheless people still want to swim with them, and they do so in large numbers at Kaikoura, where huge pods of Dusky Dolphins are reliable and easy to swim with. Yes, the same Kaikoura I keep banging on about that is a great place to see albatrosses. Happy tourists amongst a massive pod (which went for a while either side of this shot) of Dusky Dolphins right off the coast of Kaikoura.

It wasn’t the dolphins of Kaikoura that my friends and I swam with on our recent trip to South Island, in fact it wasn’t any dolphins at all, but we’ll get to that. No, we decided to try our luck at a different location, Akaroa. This village and inlet into the Banks Peninsula, just south of the city of Christchurch on South Island’s east coast, is something of an unexpected delight. The village wouldn’t look out of place on the coats of New England, but in spite of being utterly charming and close to a major city on Easter Sunday, you could move about. Leaving from the harbour on boats were tours to swim with one of New Zealand’s most endangered mammal species, the Hector’s Dolphin. This is one of the smallest dolphin species in the world, not much bigger than the common Harbour Porpoise Americans might be familiar with. We set out with Black Cat Cruises to see these diminutive dolphins and to have a swim with them. Well, I say we. I had decided to take the non-swimming passenger route. Not, may I hurry to add, because I had some issue with swimming in the ocean in New Zealand on South Island in near winter. That had nothing… not much… only a little… okay a bit to do with it. But mostly it was that I had swam with dolphins a bunch of times already, usually in crystal clear tropical waters, and money was a bit tight after seeing sperm whales and albatrosses, so I decided to enjoy the Hector’s Dolphins from the boat.

It wasn’t long before we saw them, either. The routine for swimming with Hector’s Dolphins is slightly different to other species, however. Because of their status, you don’t swim up to them, instead you get in the water near them, then make a racket so their curiosity gets the better of them and they come to check you at. It works many times more often than not. So the swimmers hopped in the water while I and another non swimmer stood on the deck and took shots. The dolphins were not interested this time, however. Or, unfortunately, any of the other times that the swimmers got in the world. You have to give the crew their due, they tried hard, staying out longer than they had to and heading right out of the harbour. From my oint of view it was great, the dolphins bow rode the boat, and I saw Spotted Shags, a White-capped Albatross and even a Buller’s Albatross, but the dolphins were in no mood to swim with my friends. Don’t let this put you off if you plan to do a swim here, mind. Black Cat Cruises have a high success rate generally (over 90%) and actually refund the difference if the dolphin’s don’t come on over. So it’s a no risk punt if you want to see them and swim with them. They know their stuff, care about the dolphins, and give a portion of the profits to help protect the species, which, by the way, recently got a no-take zone where we saw them! So if you are after a unique dolphin experience you could do worse than this New Zealand speciality. 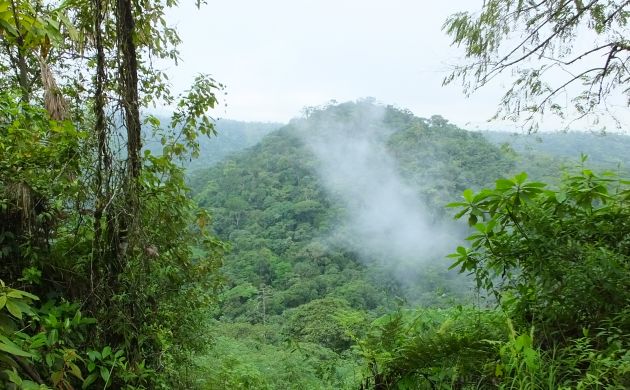 « Previous post
How Close Is “Too Close” To An Owl?
Next post »
Why Are Conservatives Pathological Jerks Who Hate The Environment?