Black Woodpeckers are usually easy to find in Germany. Yes, some birders may frown at this statement. At least one birder will now likely grab his war hammer and check flight availabilities from New York to Frankfurt as well as average prison sentences in Germany for first degree murder. However, even in the age of alternative facts, there is no denying it: Here in Germany, Black Woodpeckers are no big deal. Well, they are big. Since they don’t occur in the UK and obviously not in North America, they don’t often make it onto the front page of the bird blogging world and have this aura of unattainability, of  being a gap rather than a feature on one’s travel list. But this is really unnecessary. Here in Germany, we have them. In plenty. They feature bigly in our avifauna and if you don’t find them, well … you are either very unlucky or you are Corey.

Since it seems that – inexplicably – some visiting birders struggle with finding them, I thought that a few hints and tips would be in order. Now, the first thing you need to check is whether you are within their range in Germany. This may sound difficult but it is quite simple. Here is a map of all Black Woodpecker observations in Germany and Luxembourg during the breeding season 2012 – 2017, generated with the best data base in the world, ornitho.de (ignore the colours, they do not show concentration but denote “proof of breeding”, “likely breeding” etc.). 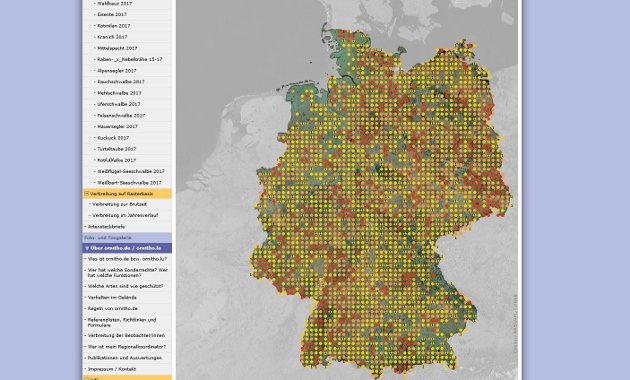 As you can see, unless you are in the immediate vicinity of the North Sea shore, you are very likely within a few miles’ reach of Black Woodpeckers. Essentially all other gaps on the map are due to lack of observer coverage.
So, your next step is to search for the right habitat. If you read up on the species, you will find territory sizes ranging from 100 ha (1 km²) to more than 1,000 ha (10 km²), with an average of around 400 ha (4 km²). This does not mean however that the forest you should choose needs to be at least 100 ha in size. Their territories may very well contain several small forests next to each other. And considering that around a third of Germany is covered in forests, I suggest you just go for the forest that’s nearest to you. Forest types? Not that important. While they prefer old-growth beech forests and enjoy having a few firs around, they can be encountered in all kinds of forest here in Germany and are definitely not habitat specialists. So, to sum it up, the basic step for finding Black Woodpeckers here in Germany is:

Now, once you are inside a forest in Germany, the next question is what strategy you should follow to find them. Black Woodpecker encounters usually are “heard-only”, to be fair. But first of all, that is the case with 90% of the birds we encounter in a forest, and second, heck, they have big territories and loud voices.

So, you will essentially walk around not too slowly and listen for its calls. There are three possible scenarios:

I would guess that very roughly 75-90% of my observations fall within one of these basic scenarios. Honestly, and don’t hit me too hard, Corey – I usually don’t bother trying to see them when I hear their call since I do get to see them quite often each year anyway. So the percentage may be different if one really tries hard. You may now ask what kind of observations the other 10 to 25% are. Well, those are the rare “golden observations”, where you are lucky to find a feeding Black Woodpecker that either hasn’t noticed you or has but somehow can’t be bothered to fly off. You may – and I use “may” here in spite of such an event being quite unlikely for a visiting birder who only tries for a day or two – increase your chances of obtaining such a “golden observation” by focusing your attention on the right micro-habitat. Black Woodpeckers mostly feed on ants and are thus most likely encountered foraging on dead pieces of wood near the forest floor, with taking apart an old rotten tree stump being one of their favourite activities. Of course they also search dead trunks that are either still standing or lying on the ground. They also dig into the large anthills of our Formica ant species but I have yet to see that in person. Dead wood is your place to check. You would guess now that a Black Woodpecker, being big and black, is easy to see foraging on the ground but the opposite is actually true: in the dense mosaic of sun spots and deep shade that usually covers the floor, you’ll have to rely on catching its movement. This is what happened recently on a trip to the wonderful Harz mountains in central Germany, and here are a few pictures for you of that unusual event – unusual even for a German birder. Of course I’d like to claim that these pictures are included here as a visual aid in getting you prepared for your own Black Woodpecker search. But honestly, this entire post was written just to make Corey mad. 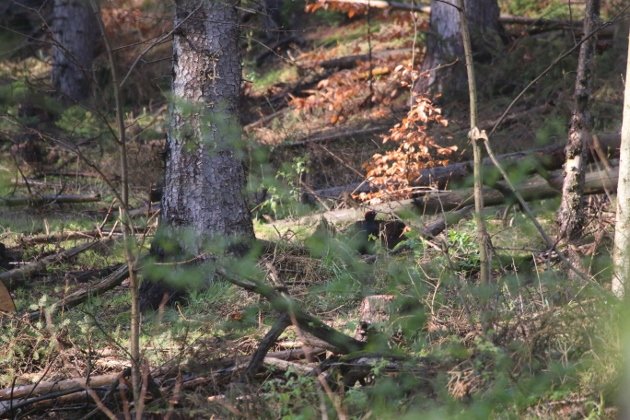 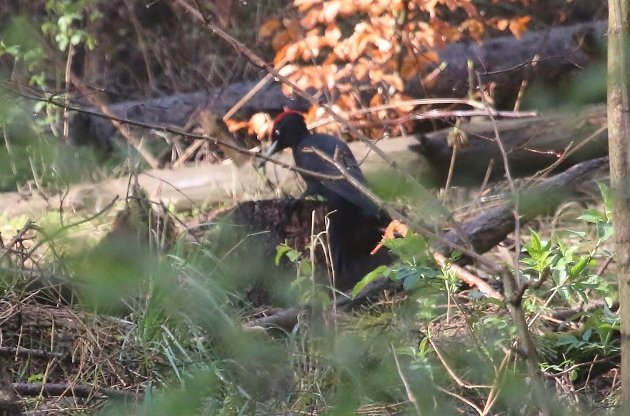 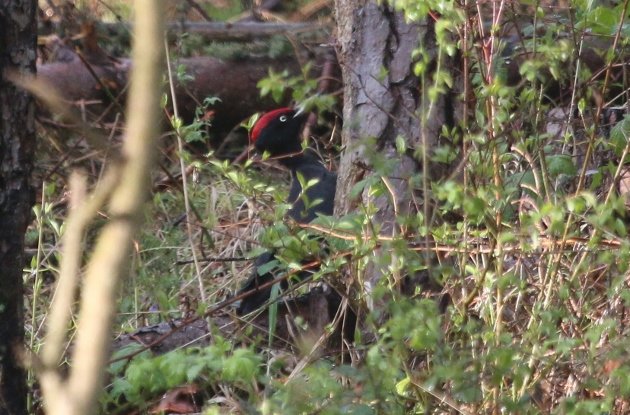 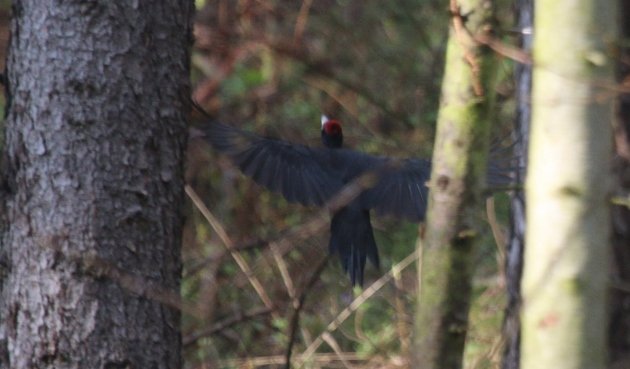 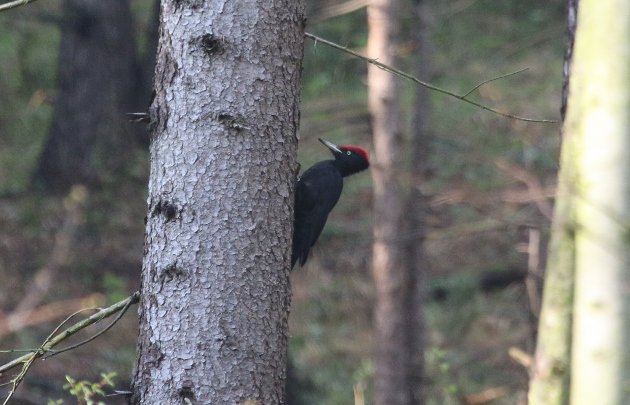