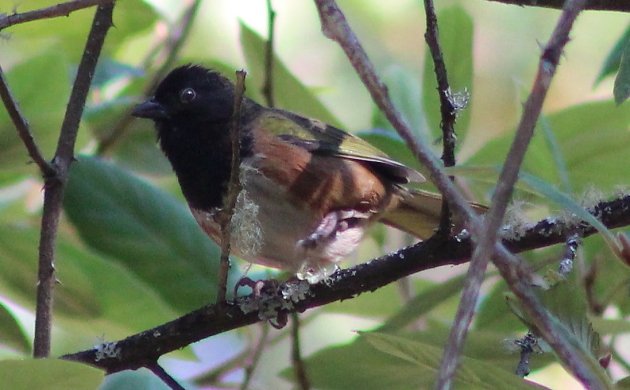 When you bird in Latin America, you quickly realize how America-centric English-language bird names are. Consider, for example, the Summer Tanager. This is an easy species for me to see in my region — any time BUT in summer. (Mexicans sometimes call it the Tangara Roja Migratoria, migratory red tanager.) The winter-only nature of migratory species can cause other name problems, such as with the Indigo Bunting. In the winter, when they visit us, these buntings are usually not indigo.

But the case of the Spotted Towhee is much more confusing, for its name problem is permanent here. This species used to be called the Rufous-sided Towhee, which was a perfectly functional name for our resident subspecies. Unfortunately, in 1995 it was split from the Eastern Towhee, and our subspecies was included in the western species, with its new name.

What is the problem? Please study the above photo, which I took a half hour from my home in Morelia, Mexico. Look carefully at those wings, and you will notice two important facts: 1) they are olive-colored, not black, and 2) NO SPOTS. But the sides are still rufous. Can you see the problem?

Now, there is a second issue to be taken into account here. In central Mexico, “Spotted” Towhees seem to hybridize freely with Collared Towhees, forming what is known as an intergrade. Some experts believe our entire resident population belongs within this intergrade. I personally almost never see clear hybrids in my area, but I do have photos of one example, with the gray flanks and rufous crown of the second species, but no collar: 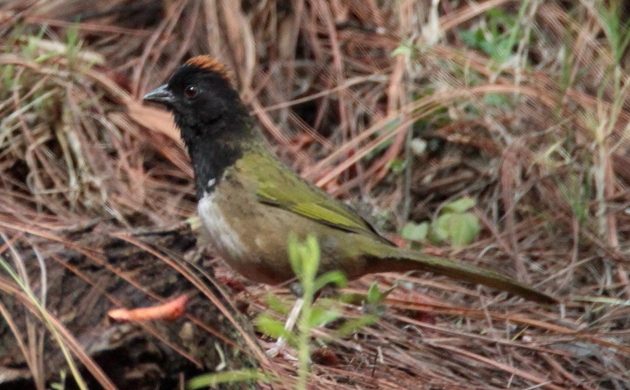 Dear scientists: I know Towhees are complicated. I feel your pain. Perhaps doing more DNA work in central Mexico will not produce another split; although eBird, anticipating the possibility of just such a split, suggests calling our local variety the Spotted Towhee (Olive-backed). Olive-backed Towhee would be a fine name. But if you can’t make the split, could you please find a more inclusive name for the whole species? Rufous-sided, for example, would still work perfectly.