Given the number of bird bloggers stomping around the 10,000 Birds site since the guys launched the concept, Mike, Corey and Charlie could be forgiven if they felt they had been ‘invaded’ in recent weeks. Having sat back and read the various contributions I’ve been getting more and more nervous ahead of this first post, as this particular invasion is sweeping all before it with talent. Getting to blog here, in this space, is the blogging equivalent of jamming with Jagger, Richards and Wood, I just hope I can give some satisfaction.

For some 2010 in Britain will be remembered for an individual rarity such as the Blakeney Point Alder Flycatcher, only the 2nd British record; for others it might be the first confirmed breeding of Purple Herons at Dungeness, Kent. Whilst those individual events and others have been exciting, autumn 2010 for me, has been about three invasions that have sparked debate, tested our knowledge and demonstrated just how unpredictable birding can be.

Charlie has posted about the current irruption of Bohemian Waxwings that is currently happening across Britain with large flocks gathering; some in Scotland numbering a 1000 strong. In total this invasion involves many thousands of individuals. Over the Autumn migration period this year there have been three other invasions involving smaller numbers of some amazing birds.

We need to go back to late summer, to the end of August and Cornwall, to a cliff top path between Kynance Cove and Lizard Point to find the very first of our invaders. A birder out for the morning on 24th perhaps heading to a seawatch point came across a single Lapland Bunting (or Longspur if you prefer). An early record, especially so far south, almost as far south as it’s possible to go in Britain. The following day brought two more in the Outer Hebrides, then another in Ireland at Bridges of Ross on 26th, two days later the same site held seven and four more were on the Great Orme in North Wales. Lapland Buntings spread across four countries in four days with a distinct westerly bias. Considering that the previous 10 years had brought only five August records of Lapland Bunting to Britain and only one of those away from Shetland and the Outer Hebrides and it was obvious something unusual was happening.

As the invasion increased the numbers grew, the final day of August bringing news of the largest count ever on Fair Isle of 142; a record that lasted just one day as 184 were found and counted the following day. As September progressed birds filtered south and reached almost every part of Britain. Many landlocked birders in inland counties took to the hills and took the opportunity to add Lapland Bunting to their county list as many were seen and heard flying over during visible migration or ‘viz-mig’ watches. 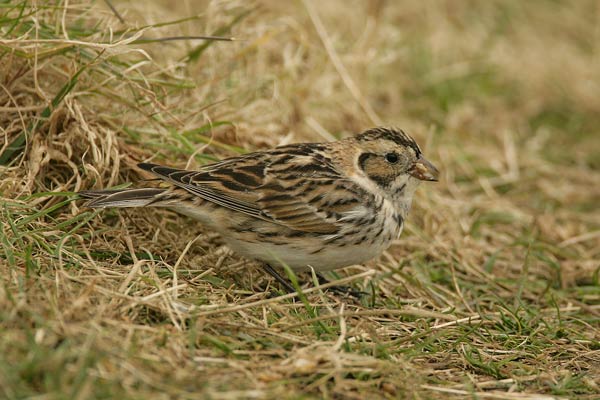 A good number of the individuals involved were extremely confiding and bird photographers filled their boots, with some great images appearing across the internet. Informed opinion on the origin of this invasion pointed towards subcalcaratus the Greenland and North American race of Lapland Bunting as there was a distinct westerly bias in the last week of August before they spread out, no obvious migration had been noted on the other side of the North Sea to account for the numbers that were being found.  Weather conditions at the time appeared to confirm this with high pressure providing good departure conditions over Greenland and a strong westerly airflow to guide them in our direction. The final piece of the jigsaw appeared to be numbers in Iceland, where exceptional numbers were also recorded early with up to 120 in one flock.

Fast forward to late September and two Red-flanked Bluetails are found on Fair Isle; certainly not exceptional on Fair Isle with more than its fair share of records of this enigmatic migrant, once coveted above all others as the rare bird to find in Britain.  Four, perhaps five, more were found in the following four days including two on the mainland. “A good year for Bluetails” seasoned observers commented, unaware of what was to come in the following weeks.

Rewind to 1973 and renowned Finnish ornithologist Heimo Mikkola had a paper published in British Birds entitled ‘The Western Spread of Red-flanked Bluetails’ into Finland. Mikkola noted that during warm springs the migration and subsequent colonisation of the species in Finland progressed further to the west. 37 years later with the ‘warming’ having continued this unobtrusive species has increased from its early first footholds to an estimated 750 breeding pairs. 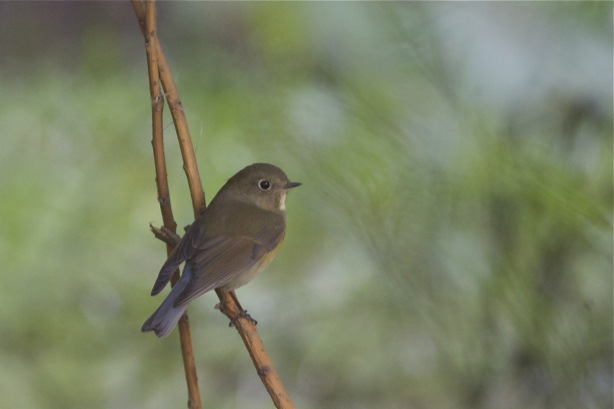 One week after those first arrivals this autumn, weather conditions were right for a further large arrival of migrants, though few would have predicted the astonishing and unprecedented numbers of this once rarest of the rare on British shores that would be found in the coming days. Over the following 30 days an incredible 24 Red-flanked Bluetails were found across Britain & Ireland. I was lucky enough to be present that first weekend when one of the first was found in my native county Northumberland, one of two in the county that day. To put this into perspective, by the end of the 20th century birders in Britain had been lucky enough to find 20; a further 35 were added between 2000-2008 highlighting the continued success of the Finnish breeding population.

It remains to be seen whether arrivals on this scale will continue in future years or whether weather conditions and dates conspired to cause a freak event but it has certainly been appreciated by huge numbers of British birders who have finally got to grips with a beautiful and magical species that was once almost mythical in its status.

Our third ‘invasion’ whilst originating again from Scandinavia is of a much larger and more regular visitor to Britain, albeit, in small numbers each winter. Rough-legged Buzzards would probably rank highly in the list of ‘most frequently misidentified’ species in Britain. This status perhaps as a result of the relatively small numbers wintering in Britain and the species tendency to wander and range over wide areas. Pale juvenile Common Buzzards are the culprit in most cases, ensnaring the unwary birder often after short or distant views. 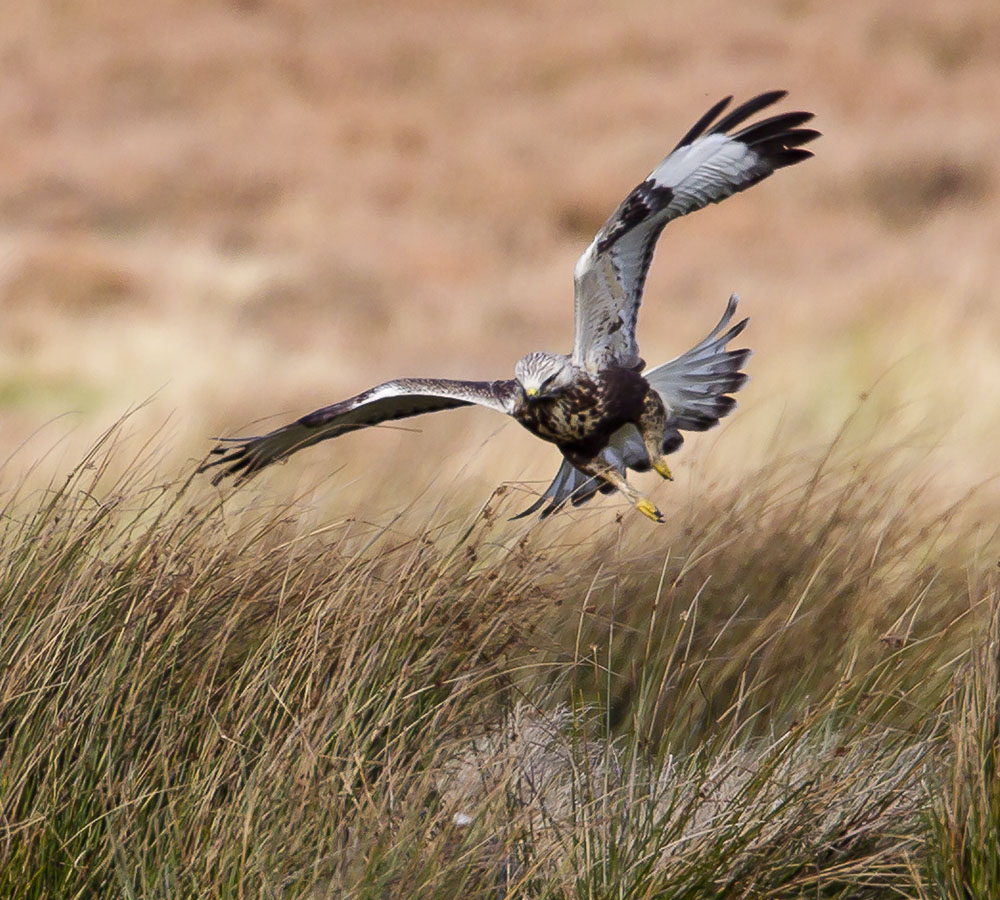 2010 has seen a good arrival of Rough-legged Buzzards in Britain, mainly along the east coast. Some sites have recorded more than one individual. The North York Moors in Northern England is one such site. Rising steeply south of Cleveland the mosaic of moorland, sheep pasture and managed grouse moor have played host to up to five individuals in recent weeks. Content to hunt and rest in a 3km stretch of heather clad valley, dotted with large well-populated rabbit warrens these individuals have allowed exceptionally good and regular views to many birders from near and far.

My previous encounters with Rough-legs have been distant, poor views and too infrequent so a visit two or three weeks ago that got me to within 200m of two juveniles that were watched for well over an hour was an absolute joy. No surprise that as we trekked back out of the valley we found 16 carloads of birders enjoying a further two juveniles at the opposite end of the valley.

Many British birders are now hoping that it has been such a good year for Northern visitors that another northern speciality Pine Grosbeak might put in appearance, with only a single mainland record in the last ten years, one is long overdue, though an invasion would be unprecedented. Who knows a mainland Grosbeak might even tempt Charlie out of ‘rare bird retirement?’ [Edited by Charlie: YES, oh yes, it would…] 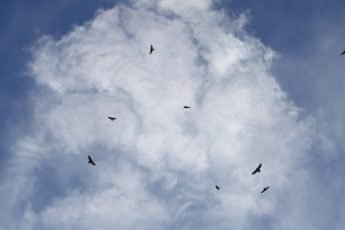 Where Are You Birding This First Weekend of May 2020? 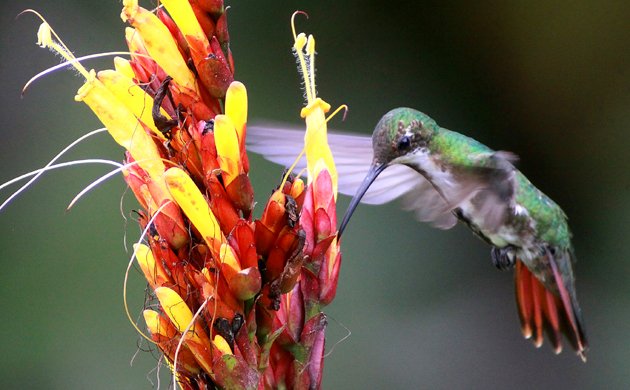 What is the Hummingbird Big Day Record?