Avian influenza H5N2 in the Mississippi and Pacific Flyways 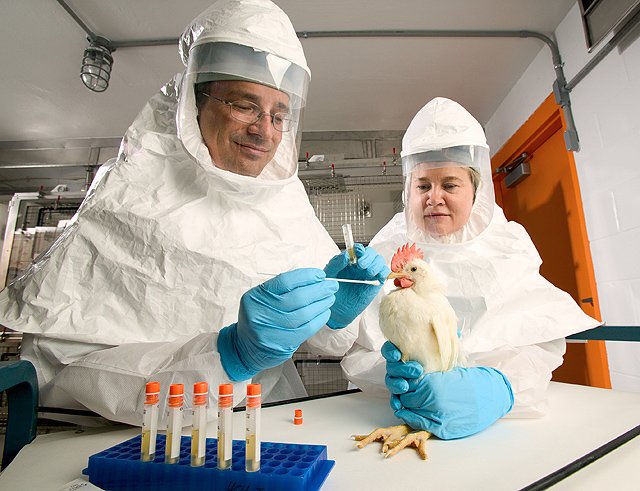 What is H5N2 Avian Influenza?

H5N2 is a bird influenza virus that is making news. This mainly affects domestic fowl, and in this sense is not a topic central to 10,000 Birds. But, wild birds are part of the story, and the virus itself has changed and has been known to make wild birds ill. And, of course, the reputation of certain species of birds as troublemakers for humans is a problem in bird conservation, so this is worth watching. Here I have a quick summary which I’m afraid lacks a lot of information that we’d like to have but just don’t.

Close to 5% of turkeys being farmed in Minnesota have been or shortly will be destroyed, and the virus is also affecting chickens. The virus is mainly found in the upper plains and midwest, including both the US and Canada. It is believed that the virus jumped into domestic poultry via wild migrating birds. It is not clear to me if the numerous cases of infection are all explained by wild to domestic bird transmission, or if some of the farms were cross-contaminated. Or, even, many of them. In any event, this round of H5N2 outbreaks is expected to slow down and stop soon, as the migrations wind down. Also, warmer conditions seem to attenuate avian influenza. Since the affected region has been experiencing unusually cool weather most days this spring, perhaps the regional epidemic will last a bit longer, but any day now, the meteorologists keep promising, it will get warmer.

The USDA expects the problem to return in the fall when the seasonal migration starts up again.

Should we be concerned about H5N2?

Overall the problem is not huge; the total number of birds affected is small, and the market for domestic fowl is robust. There will be a Turkey for every table for the US Thanksgiving.

H5N2 is a subtype of Influenza A, and infects many species of birds including those mentioned as well as ducks (domestic and wild). Ostriches are infected as well as, in one known case, Falcons. In the past, most variants of this virus were not especially bad, but the current, recently emerged variant causes severe health effects in domestic turkeys and chickens.

People can and do, rarely, get this virus as well, but are often not very affected, and don’t seem to spread it to each other. We should assume that how much a given variant of H5N2 affects a specific bird species is fairly unpredictable until it actually happens.

The big human and bird concern for H5N2 is, of course, that the virus will “mutate” into a novel highly virulent killer pandemic flu. I put “mutate” in quotes here because the way influenza changes is a bit different than what most people think of when they see that word. During reproduction, influenza viruses break into parts, with different parts being reproduced by the co-opted machinery of the infected cell. Then, the newly born baby parts reattach to become viruses. If there is more than one kind of influenza virus doing this at the same time in the same place, novel Frankenviruses are fairly likely to form. I would assume (but I could be wrong) that the vast majority of these chimeras are non viable, but it is also possible that an entirely novel influenza subtype could emerge. Then, of course, the chances of that particular virus doing anything important is small. Most viruses do not survive, or are not passed on. But if that does happen, and it continues to spread and reproduce, then we might be looking at an entirely new form. If that form causes serious illness (in a bird or in humans), and if it is spread easily, then we have a problem.

Interestingly, H5N2 has been used as a vaccine for domestic fowl to prevent H5N1, the more infectious avian influenza.

China used H5N2 inactivated vaccine to prevent spread of H5N1 strain highly infectious bird flu virus and that has proved to be effective, an official with the Ministry of Agriculture (MOA) said on Tuesday.

…After five years of efforts, Chinese scientists had developed a kind of inactivated vaccine using H5N2 strain virus separated from a goose in Foshan, south China’s Guangdong Province, which was foundcarrying H5N2 strain virus in 1996. They also have made progress in developing H5N1 fowlpox vaccine.

So, what about wild birds? This pathogenic version of H5N2 does affect wild birds. Something, but not much, is known of this, and health authorities are paying attention. The USDA …

… has confirmed the presence of highly pathogenic H5N2 avian influenza in a commercial turkey flock in Pope County, Minnesota. This is the first finding in the Mississippi flyway. It is the same strain of avian influenza that has been confirmed in backyard and wild birds in Washington, Oregon and Idaho as part of the ongoing incident in the Pacific flyway.

CDC considers the risk to people from these HPAI H5 infections in wild birds, backyard flocks, and commercial poultry, to be low. … The United States has the strongest AI surveillance program in the world, and USDA is working with its partners to actively look for the disease in commercial poultry operations, live bird markets, and in migratory wild bird populations.

These virus strains can travel in wild birds without them appearing sick. People should avoid contact with sick/dead poultry or wildlife.

So, we have not seen widespread death among wild birds. We have seen H5N2 become an important virus for domestic poultry, suddenly, starting in Asia, moving to Europe, then to North America with wild migratory birds as the likely vector. At the same time, H5N2 is just now being added to the list of avian influenzas of concern, having stayed in the background as a less pathogenic form. This change has people concerned.

Wild birds, of course, play an important role in our understanding of avian viruses that affect domestic crops, [as canaries in the coal mine](http://10000birds.com/sentinels-or-sitting-ducks.htm). As it were. On the more positive side, concerns about wild bird transmission of pathogens has been known to work against the wild bird trade. So that’s good.

Watch this story. It may well burn out but it may also become very important.