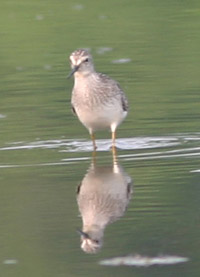 Perhaps I’ve become jaded by Jamaica Bay Wildlife Refuge, one of the premiere birding spots on the east coast of North America. While waiting for the rest of the Core Team to return from their rural retreat, I dropped in on Jamaica Bay for brief spot of bird watching. My destination was the oft-ignored East Pond, but I found myself on the opposite end of the pond from the rarities I sought and had no interest in trudging through a mile of muck and guano for the privilege of spotting a rare phalarope. Also disappointing was the small number of shorebirds where I expected teeming flocks. Are massive swarms of virtually indistinguishable shorebirds in cryptic brown plumage really too much to ask for?

I’m awful at separating one sandpiper species from another. Still, I was able to pick out a small cluster of Least Sandpiper, a scattered string of Lesser Yellowlegs, and a single Little Blue Heron flying overhead. I then retreated to more steady ground on the well-trodden shore of the West Pond. Discouraged by the low turn-out to the east, I half-heartedly noted interesting birds like American Oystercatcher, Glossy Ibis, Green-winged Teal, and Brown Thrasher amidst the regular refuge denizens. One bird that did get me worked up was an unexpected juvenile Common Moorhen. Having seen a few at Montezuma NWR last week, I was still surprised by this bird at this location. The juvie moorhen was quite striking, sleek amidst the shaggy geese and ducks, with soft gray plumage adorned with a jagged white flank stripe.

The various tern species also caught my interest. While I’m sure I spotted Forster’s and maybe even Common Tern, I might also have caught a glimpse of a target species, the lovely Least Tern. Not enough of one though! I hope for better luck next time, preferably when Sara is with me.