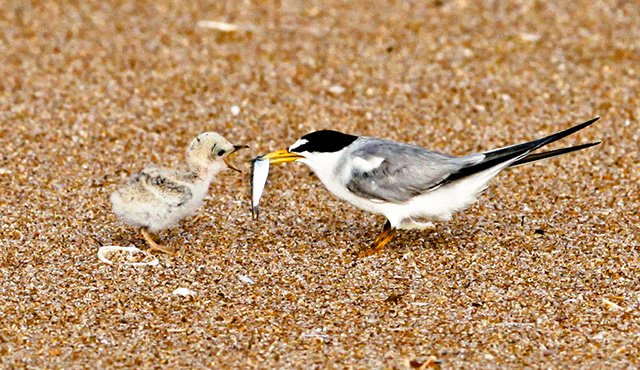 The end of July marks the end of the Least Tern’s (Sterna antillarum) nesting season in Florida. Young Least Terns, some still begging for food, begin to appear on Florida beaches and will soon continue their flight south eastern South America. But making it to a flying age in Florida is an accomplishment in itself. There are very few beaches in the Sunshine State that are safe and remote enough to harbor nesting least terns.

In response to the crowds, dogs, and habitat encroaching least terns took to the gravel rooftops as alternative nesting sites. Over the years more and more tern nested on rooftops. It is estimated that currently, about 80% of Least Terns nesting in Florida do so on gravel roofs. It is likely that in the future most Least Terns will nest exclusively on rooftops as new generations hatched there are likely to return and nest at a setting similar to where they hatched. The Office Depot store near where I live has the largest Least Tern colony in town. During the first weeks of April the tern begin to show up and numbers build up in the next weeks. By early May most terns have laid eggs. Interestingly, the bird activity during the incubation period is misleading when it comes to estimating the number of nesting terns. As part of a monitoring study of the Office Depot colony, we gain access to an adjacent rooftop. Our low estimate, judging from the birds seen flying in and out, was way off the mark. There were a lot more terns incubating eggs than what we had estimated.

Nesting on a rooftop is by no means safer than doing so on the beach. Three to four days after hatching, the chicks leave the nest and become quite mobile, which is a problem if the roof does have barriers preventing them from falling in gutters or down to the ground. Chicks fall off the roof just by moving about. Once down a chick will likely seek refuge under cars, hedges, or under anything. Parents will not feed the young once on the ground. If not returned to the rooftop, chicks will starve if cats, dogs, fire ants or raccoons don’t get them first. But the trouble does not end there. Once the chick hatch parents activity increases as they constantly fly back and forth to and from the feeding areas. More terns flying around mean more chances for droppings to fall on cars and people’s head. People don’t often link an occasional dropping in their heads with a nesting colony on top of the store they are entering. It is the cars that regularly park near the store that take the worse of the flying terns and the main source of complains. Some building owners blessed with Least Terns colonies on their properties often implement measures to discourage the birds from nesting there. The State of Florida offers incentives and technical assistance to building owners so that they keep their roofs in the conditions the birds chose to nest. Non-property owners affected by the flying terns seem to change their attitude after learning about the threatened status of the birds and the reasons why least tern no longer nest on their natural sandy beach habitats.

« Previous post
Where Are You Birding This First Weekend of August 2014?
Next post »
Birding California: A Regional Primer