In a civilized world, one needn’t strictly segregate business and pleasure. While I am all business when I’m in the office, it helps that said office overlooks a reservoir teeming with exceptional avifauna. New Jersey’s Oradell Reservoir is a large, peaceful body of water that sustains a marvelous diversity of bird species throughout the year. Winter may be the most impressive season from a birding perspective, as all manner of ducks, mergansers, cormorants, grebes, and geese amass here. The raptors are also sensational; for the first two weeks of the year, I saw Bald Eagles every day over the water.

Early spring isn’t bad either. While the waterfowl has thinned out considerably, leaving only the usual Mallards, Canada Geese, and Double-crested Cormorants, breeding Barn Swallow numbers have been increasing daily. I’ve observed all the birds noted in previous BioBlitz reports, such as cardinals, robins, blackbirds, crows, grackles, and mockingbirds, along with Red-tailed Hawks, Turkey Vultures, Northern Flickers, American Goldfinches, all three early warblers, and the usual gulls.

The season is still too early for the other songbirds and waders I enjoy at the reservoir throughout the warm months, but spring hits some spots quicker than others. The Bioblitz motivated me to explore a new stretch of wet woods a few blocks away from my office. During my initial foray, I stumbled upon a magnificent Wood Duck in full regalia roosting in a tree. I’ve never had a better view for such as prolonged period of this impossibly colorful duck, so it stands to reason that I didn’t have my camera. Wood Ducks do it to me every time!

When I returned with my trusty camera, the ducks had, of course, departed. However, I did discover that a Solitary Sandpiper, just one naturally, calls the grassy pond that serves as the centerpiece to this ecosystem home. The newly budded trees ringing the pond were vibrant with birdsong. In addition to the aforementioned species, I observed Blue-gray Gnatcatcher, Black-and-white Warbler, Black-capped Chickadee, Tufted Titmouse, and Ruby-crowned Kinglet. My first-of-spring sparrows were Chipping and Swamp, that latter species still so unfamiliar to me that its appearance is momentous. After twenty minutes in such pleasant company, a person (almost) doesn’t mind going back to work. 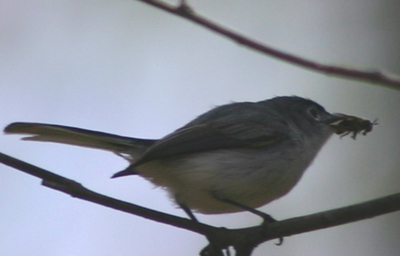