Grey-headed Flying Foxes have been roosting in a large colony in Sydney’s Royal Botanic Gardens for many years now and their popularity with visitors is matched by a reciprocal loathing from the garden’s curator. They are very destructive to the valuable trees and the garden’s management have been trying to move the bats along with varying rates of success. Their latest attempts involve hoisting speakers into the trees and playing loud noise to repel them from returning to their roost. You only need to take a cursory look around the base of a pair of large ficus trees near the Governor’s Mansion to see a far more elegant solution. Bits of leg and membranous wing scattered below the trees betrays the presence of a pair of large hawk-owls known as Powerful Owls. The mass of body parts beneath thier favoured roosting branches show that they are very efficient bat cullers. The male still held part of his catch from the previous evening. The gardeners recognise the importance and potential usefulness of the owls and have put up a nesting box in a quiet spot within the walls of the Governor’s Mansion, but as yet, the owls have shown no inclination to mate. The female (and I use this term advisedly as I cannot distinguish between the two), roosts in a separate tree from the male and was more active and curious on this warm June morning. She was distracted by three Noisy Miners who were mobbing her and did not seem able to settle while they screeched and dive-bombed her. There are no notes in the field guides to distinguish between the sexes except that the male is a bit larger. Most texts make no mention of gender differences. From close-in zoom, I note that she (?) has an obvious brown shading above the chevrons of her breast, that is much more subtle on the other bird. My lack of Powerful Owl sightings leaves me unable to say whether this is significant, but it may allow the two owls of the Botanic Gardens to be separated when only one can be seen.

These pictures were taken during a visit to Sydney’s Royal Botanical Gardens in June. 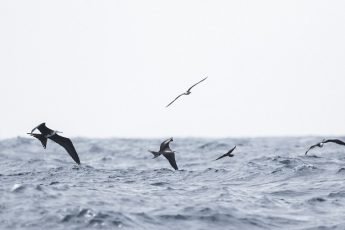