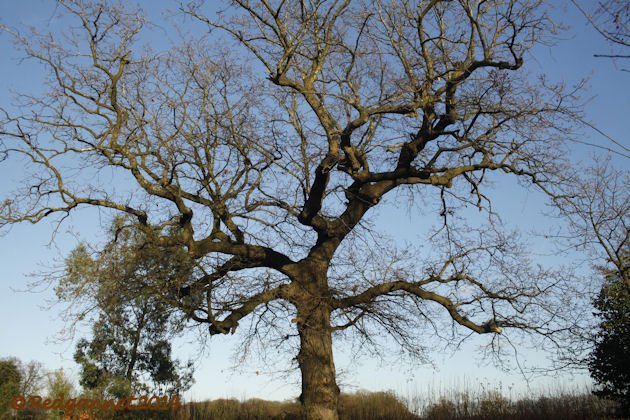 Most of you will not have heard of Otham. Neither had I until I bought a tree there.

Mature living trees are not usually sold in The UK and I knew that there would be some resistance from Mrs Gannet, but I overcame her doubts by pointing out that it came with a house. As far as she, Her Majesty’s Land Registry and the mortgage company are concerned, we have bought a house in the pretty village of Otham, Kent, but let there be no mistaking my motivation, the beautiful English Oak in the front garden was my raison d’acheter. Carrie recently noted that no-one had ever submitted an eBird Checklist from Socrates Sculpture Park, so set out to rectify the oversight. I have also spotted an underbirded area. If a circle with a 10 mile radius was drawn from my new tree, it would take in only 3 eBird Hotspots (one of which was populated entirely by yours’ truly and a second which contains a single entry of one bird). If the most popular corner of one of The World’s most populated islands can only muster 3 hotspots in an area of more than 300 square miles, then it is either seriously underbirded or, the word according to Cornell University has not yet reached the heathens of Kent. The village of Otham has so far completely failed to trouble the local eBird invigilators who are probably curled up in a comfy chair by the fire in The White Horse, gently snoring. The excitement of buying a tree has been tempered by the house which has proved to be quite needy, but eventually I managed to get away from the leaking pipes and dangerous wiring to escape into the garden for a few moments. Mrs Gannet and I disagree for most of the time, about most things, but we have found a common fancy in a Robin that has staked out a territory by the oak tree. He is very bold and follows us around, flying quickly down to inspect any turned over leaves. While the gutters continue to hang from the sides of the house and the roof looks as if it might collapse at any moment, the dozing invigilators of Otham are unlikely to be disturbed from their slumbers, but for now at least, the village has one submission; one European Robin.