When you monitor a species of birds over many years you learn a lot from your observations and you soon become aware of the fact that some birds are just better at parenting than others. Of the sixteen pairs of Pied Oystercatchers between Gantheaume Point and Willie Creek on the south side, which is a length of breeding territories covering 23 kilometres-just over 14 miles-only one chick fledges most years. There is egg predation, chick loss and sometimes possibly just some “bad parenting”! One pair of Pied Oystercatchers laid eggs the first year and did not appear to realise they were supposed to sit on them, but they have since learnt it is an essential part of rearing a chick and they have done so since. Last year they were not successful, but they did try hard and the chicks did get quite big before the loss.

Pied Oystercatchers are incredibly predictable and they will lay their eggs in the same place every year and at the same time, so it does make it easy to monitor them. Each pair has a strategy and sometimes it is successful and sometimes it is not. Over the years some pairs of Pied Oystercatchers appear to learn how to protect the eggs and their young much more effectively and are therefore successful where other pairs may fail. Predators vary along the coastline and this is often putting the odds against the survival of the eggs or chicks, but overall the population appears to be stable due to the longevity of the species and because of the good parenting skills of some individuals.

This year one pair of Pied Oystercatchers has once again proven to be able to raise young. They are one of the older pairs and they have raised several young over the years, but only ever one has been fledged each year. They are the only pair to consistently lay three eggs and all other pairs along the coast only lay two eggs. All three eggs hatch out each year and unusually they did not need to lay a second clutch this year. Most years they lose the first chicks and then lay again about ten days later. They always walk the chicks to the reef within a few days of hatching to enable them to find more food and stay there until they can fly. Once the family of Pied Oystercatchers get to the reef they are easily able to hide the chicks and it does not take you long to become familiar with the communication between the adults and young. There will be a broken wing display if you accidentally come across them without warning, but generally you hear the communication and you can then just stop and observe the interaction between the adults and young. There’s a tiny black dot on the ridge through the middle of the photo-Pied Oystercatcher nest sitting! Three eggs in the nest

When we returned from the Northern Territory I was soon covering as much of the coast as possible on foot and by bicycle in search of the pairs of Pied Oystercatchers and to see if any had been successful in breeding this year. There was one mystery-where had the pair from Gantheaume Point gone? Our latest knowledge of this pair of Pied Oystercatchers was that they had successfully hatched three eggs in late August and they had walked the chicks to Gantheaume Point within a few days of hatching. They were acting aggressively in late September and so all indications were that they still had at least one surviving chick.

I have covered more coast-line this week in search of the pair of Pied Oystercatchers that I know so well and finally I have found them half way between Town Beach and the Port of Broome. I didn’t just find them, but I found out that for the first time they have successfully raised three chicks and they are flying and this is the first known survival of three Pied Oystercatcher chicks that we are aware of in the local area. They have flown along the coast together and the parents will soon leave them to venture off on their own. Some of the young from this pair of Pied Oystercatchers have gone north to join a non-breeding flock and others have flown south. These young Pied Oystercatchers are now three months old and have not quite gone completely black yet and have a distinctive black tip on their bills. They are still grouped together with their parents and there is a short “peep” as I approach. Maybe they are talking to me and not the chicks, because surely they know me after all of these years and have missed me! Family of five-adult Pied Oystercatchers on the right Family of five-adult Pied Oystercatchers on the left I will keep an eye on the family of Pied Oystercatchers for as long as they are on that beach and then once they have gone I will return to Gantheaume Point to ensure the adults have reclaimed their territory ready for next year’s breeding season. It is amazing that they could raise three chicks and I hope this is the start of a few years of more successful breeding and if all the other pairs fail then this pair is definitely helping to sustain the population! 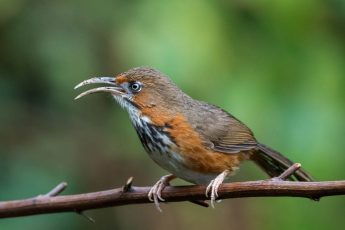