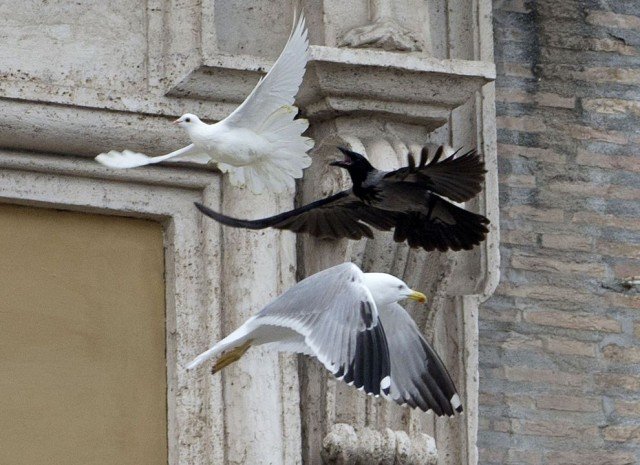 So much for not killing the messenger. This past weekend at the Vatican, Pope Francis delivered an annual address appealing for global peace. With the help of two children, he released two all-white doves. To Christians, the birds represent peace, but to a gull and a crow, the birds represented lunch. (Image by Gregorio Borgia/AP)

A Hooded Crow and a Yellow-legged Gull attacked the doves, which seem to have escaped a few feathers lighter. National Geographic offers a science-driven analysis of the incident, which is apparently just a case of predators being, well, predators. (For a snarkier take, try Gawker, which has a story suggesting the attack has ominous overtones.)

This isn’t the first time that papal doves have met with misadventure. Previous releases have resulted in similar chase scenes, and at least in one instance, the birds flew back into the papal apartments. All of which is has animal-rights organizations urging the pontiff to reconsider the practice, reminding him that his namesake, Francis of Assisi, is known as the patron saint of animals.