When Corey and Mike asked if I wanted to review this book, I cautioned them that I am far from an expert in seabirds (my friends know that if you want to see my face turn green, just say the word “pelagic”), but would happy to review it from the perspective of a seabird beginner and librarian. Fortunately, Alan Tilmouth, a beat writer with pelagic experience, expressed an interest in the book as well. So, you will be reading two reviews of this book in 10,000 Birds. (Here’s Alan’s review.)

Say the name Steve Howell and I think of two things—gulls and molt. This is probably because Gulls of America, the Peterson Reference Guide co-authored by Howell with Jon Dunn, has a prominent place on my bookshelf, and because I spent some time last year, while staffing the Sandy Hook Bird Observatory Visitor’s Center, explaining to beginning birders why “molt”, as in Howell’s Guide to Molt in North America, on display at the SHBO, was a subject worth reading. In other words, the terms avian identification, challenging and Howell all go together. (To be fair, Howell has also written about hummingbirds and finding birds in Mexico, which to my mind are a little easier to comprehend. Slightly.)

Howell continues his tradition of giving clarity to what most birders find intimidating with Petrels, Albatrosses & Storm-Petrels of North America: A Photographic Guide, just published by Princeton University Press. This is the first field identification guide on tubenoses in North America. The classic work is Peter Harrison’s Seabirds: An Identification Guide (Houghton Mifflin, 1983), now out-of-print. This is an impressive book, and one that birders who love the ocean will want to own. It covers 70 seabird species, explaining specific identification points with over 900 photographs and highly detailed descriptive text, all backed by an expertise based on years of research in the field, examination of museum specimen, and knowledge of ornithological literature. First of all, what are tubenoses? They are albatrosses, storm-petrels, petrels, shearwaters (actually petrels), black and white and gray and brownish birds whose prominent nostrils are covered by tubes, giving them a really good sense of smell and enabling them to drain away excess salt. My photo above of Galapagos Albatross (also known as Waved Albatross) shows the nostril tubes on the side of the bill. (In petrels and storm-petrels they are on top of the bill base.) You can sometimes see tubenoses from land (especially after a storm, as eastern birders found out after Hurricane Irene). But the best place to observe them is from a boat or, if you are lucky, on their breeding grounds, which tend to be isolated islands.

Howell’s Introduction gives an excellent lesson on the lives, environment, migration, distribution and taxonomy of these creatures. Knowing about tubenoses means knowing about the ocean, so there is a lot to learn here about currents, water masses, and marine habitats. A respected expert on seabird taxonomy, Howell summarizes the current state of a field, which, he says, “has followed a long and tortuous path, with much debate about whether separate populations are species or subspecies” (p.15). Calling the AOU Checklist “particularly anachronistic”, he charts his own course. 10,000 Birds readers will be most interested in the section on Field Identification of Tubenoses. It is here that Howell describes how to observe tubenoses—how to evaluate flight manner in relationship to wind, how to think about plumage in relationship to lighting and distance, the differences between seeing the bird in flight and seeing it on the water. As befits the author of Molt, a lot of attention is given to molts and plumages, aided by sample diagrams of wing molt schedules, pictorial examples of wing molt in Sooty Shearwater and Wilson’s Storm-Petrel, and a table of molt strategies of 33 selected petrels, albatrosses, and storm-petrels. I found this material overwhelming, but was encouraged by Howell’s advice: don’t rush it and learn it in conjunction with field experience. Of course, as I mentioned in the beginning of this review, I am not a big fan of pelagics. However, reading Howell’s advice on how to survive birding on a boat (well, he doesn’t quite put it that way, he calls it “How To See Tubenoses”), I just might venture out again. I’d like to see a sight like the photo above, taken by Howell off Bodega Bay, California and featuring Flesh-footed Shearwater (dark bird on the left), Pink-footed Shearwaters, and a Sooty Shearwater (top right).

As is usual with identification guides, the species accounts take up the bulk of the book. Petrels is divided into 3 main sections: Petrels (40 species), Albatrosses (11 species), and Storm-Petrels (19 species). Each section is then further subdivided. Appendices treat Recently Extinct Species and Hypothetical Records. If a tubenose was documented in North America, it is in this book. Each main section begins with an overall description of species characteristics, and some of the subsections contain additional material on how to differentiate between species that look very similar. For example, there are four pages of photographs showing the differences amongst white-rumped storm-petrels. Although the book’s overall organization is clearly laid out, some of this additional material is hard to locate. I wouldn’t have been able to find the white-rumped petrel photographs if I had not been going through the book page by page. Each species account consists of Identification Summary, followed by briefs on Taxonomy, Names, Status and Distribution, including a map. This is followed by a long section on Field Identification which covers Similar Species, Habitat and Behavior, Description. The Description section is further divided into treatments on age, morphs, “on the water”, hybrids, and molt, as required by the species at hand. The illustration above shows the first two pages of the Species Account for Buller’s Shearwater. Photographs follow, illustrating important diagnostic field marks, how the bird looks at different ages, in different plumages, in bad lighting, in strong winds, from the front, from the side, on the water and in flight. If necessary for identification points, photographs of similar looking seabirds are shown side by side. Casual visitors and rarities are treated less extensively than tubenoses commonly seen on the Atlantic and Pacific coasts. Petrels, Albatrosses & Storm-Petrels of North America is subtitled A Photographic Guide, which makes sense when dealing with species that are so similar. The “gray neck spur” of Black-winged Petrel (pictured to the right), a field mark that helps differentiate the bird from Cook’s Petrel, becomes much easier to know and remember when you are looking at the visual. Most of the 900-plus photographs are by Howell, with contributions by well-known ocean birders. Some of the photographs are lovely, some are not. This is o.k. because each photograph serves a specific purpose in delineating points of field observation. Maybe in a future article Howell will explain how one can take a decent photograph of birds at sea when dealing with the myriad challenges of variable light, wind, spray, and a moving boat.

The book itself is large and heavy (4 lbs.) and well put-together, with thick paper and the large margins required for constant thumbing. The index could have been more extensive; it is limited to listings of bird species by common and scientific names, and I think it would have been helpful to include the topical material covered in the Introduction. The 17-page bibliography of Literature Cited is unusually comprehensive, including books and articles from the overlapping fields of birding and ornithology. This is an identification guide strongly rooted in current scholarship, with many of the facts in the species accounts documented and footnoted.

Howell himself has authored numerous articles on tubenose identification, cited here, and you can find additional comments and informal papers on the Internet (the bibliography does not include web sites or listservs). When he is not writing about tubenoses or molt, he is leading bird tours with WINGS or working at the Point Reyes Bird Observatory, California, with which he has been associated for over twenty years. Perhaps one of the main flaws of Petrels is that the huge amount of detail integral to the book’s excellence gives little opportunity for Howell’s personality to shine through. We see a glimpse of his energy and devotion to his birds in his brief section on conservation: “If even a fraction of the budget spent on bureaucratic oversight of conservation efforts were spent on identification studies, the seasonal at-sea distributions of different ages (and perhaps sexes) of these majestic but threatened species might be known, which could be of value to their conservation.”

Should you buy this book? If your mouth waters at the idea of a pelagic, then yes, Petrel, Albatrosses & Storm-Petrels of North America is for you. It is expensive, but how many identification guides on tubenoses will you be purchasing over the course of your birding life? (I should mention that Princeton University press published a British title, Albatrosses, Petrels and Shearwaters of the World by Derek Onley and Paul Scofield in 2007, but that’s 256 pages about the world. We’re looking at 520 quality pages on North America.) If you are a beginning birder, or a birder whose opportunities to observe seabirds are limited, I would wait and read articles in birding magazines and blogs, like David Ringer’s excellent 10,000 Birds posting Tubenose Taxonomy 101.

One final word about Shearwaters! I was slightly incorrect when I wrote that Petrels includes all the seabirds that have ever been seen in North America. There is actually one Shearwater that is not included in this guide , but who is very important to 10,000 Birds readers. I’m betting he will never get seasick. Meanwhile, I hope this review has gotten you thinking about all the tubenoses you’ve observed or that you’d like to see and photograph. Which albatross or storm-petrel or shearwater is on your target list? And when you see it, will you be on a boat or on land?

All photographs, except the one by the blog author, are used with the permission of Princeton University Press. 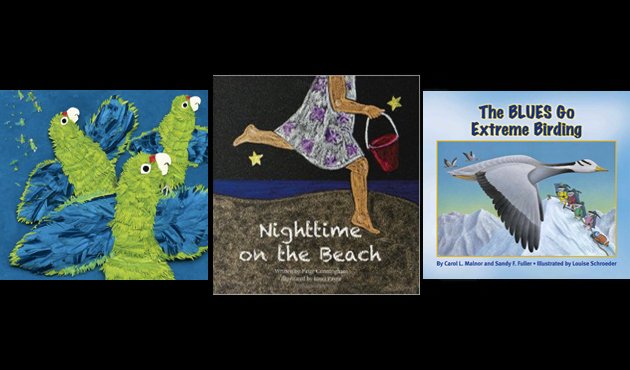 Summer Books for Kids (and the rest of us)