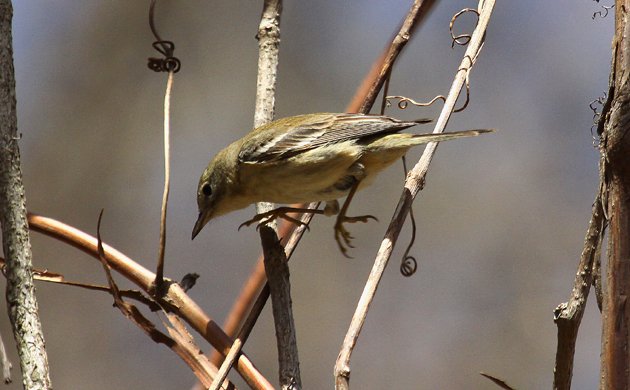 One of the things I love about paying attention to what birds are doing is the odd behaviors you notice and have to try to figure out. A recent encounter with a female Pine Warbler was one such opportunity.

I was at the Oradell Reservoir in Bergen County, New Jersey (the northeasternmost county in New Jersey for those keeping track at home) and the woods were busy with Palm Warblers, Yellow-rumped Warblers, and Pine Warblers. One particular Pine Warbler caught my attention because she kept pulling at grape vines, peeling the bark off, manipulating it a bit in her beak, and then dropping it. She did this at least four times, and it was clear that she was not peeling the bark as a foraging behavior but for some other reason. While I was observing this bird and getting these images I was under the illusion that Pine Warblers do not nest at the Oradell Reservoir but a quick search in eBird of summer records for the last five years turned up three records of singing males in June and July. (Which is nice to know, especially considering how sparse summer records of Pine Warbler are in the immediate area.) So is this bird getting a jump start on finding nesting material? Or is she practicing for when she reaches her breeding grounds? Has anyone else observed this behavior in female wood-warblers when they weren’t actively nest-building?

And how much protein does a Pine Warbler need? « Previous post
Shorebirds and Gulls of Florida’s Treasure Coast: Where the Tropics Begin
Next post »
Where Are You Birding This Third Weekend of April 2013?