I just flew in from the Rio Grande Valley Birding Festival in Harlingen, TX and boy, are my arms tired. Actually, every bit of me is bone weary but it was worth it. The birding at this festival was epic, which is a term I don’t use lightly. This was due in no small part to the awesome array of avifauna in El Valle, as this floodplain is affectionately called. I’ll explain more about that, along with the remarkable places I visited and people I spent the week with, in time. To start, it might be best to offer some insight into what makes the Rio Grande Valley so unique among American ecosystems. You see, most feeders in the United States play host to dainty little chickadees, titmice, and finches. In RGV, on the other hand, that hooting and chattering in the backyard may very well be… CHACHALACAS! The Plain Chachalaca is a mighty member of the family Cracidae, the only one in fact that frequents the U.S. Like most of its chachalaca, guan, and curassow kin, Ortalis vetula is large and somewhat gallinaceous. While that bulky body, small head, and long tail tipped with white may call to mind turkeys, this avian has obvious arboreal tendencies, though it will come down for free food. Plain Chachalacas range throughout the southernmost reaches of Texas down through eastern Mexico and Central America all the way to Costa Rica. These omnivores favor riparian woodlands, thickets, and scrub. While they turn up in semi-arid areas, they do prefer habitat close to water. The name “chachalaca” is derived from the bird’s raucous call. Come dawn, dusk, or any other time the mood strikes them, troops of chachalacas might raise a cacophony reminiscent of barking dogs or chattering monkeys. These vocalizations, evocative of tropical jungles, are rarely described as melodious, or even pleasant! This particular species of chachalaca is, well, rather plain. Gray on the head blends to an olive back and buff belly, with an overall sienna wash. Apart from the ivory tail tip, this species’ most flashy feature, not always evident, is the crimson color of its bare throat. Well, that and the fact that it’s a giant grunting turkey-like bird determined to raid your backyard bird feeders. And you thought squirrels were bad!

This post has been sbmitted to Bird Photography Weekly #12. Go check it out! 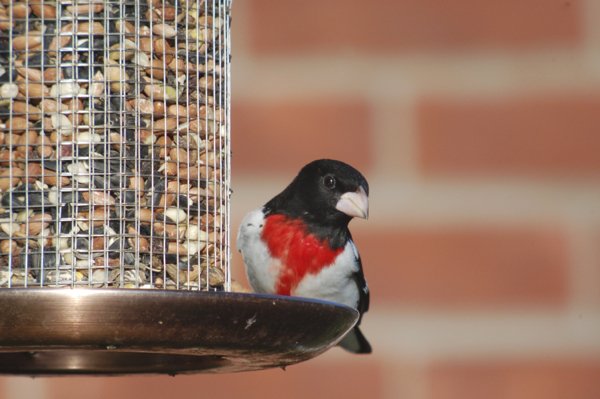