Corey started our tale of birding adventure and now it falls to me to complete it. We met at Union Square Park to scan the absurdly accommodating, utterly improbable Scott’s Oriole wintering therein. The deflating sensation of such an effortless twitch (perhaps you know the feeling) was offset by the pleasure of meeting Carrie of Great Auk – or Greatest Auk? in person. You might remember Carrie’s outstanding essay In Praise of the Great Auk – sensing a trend here – or browsed her new blog through the Nature Blog Network. Corey and I had planned to go birding with Carrie in the new year and a couple of prime species in Prospect Park provided the ideal impetus.

Leaving the hordes of Union Square behind, we traveled to Brooklyn in search of both Yellow-breasted Chat and Northern Goshawk, two fine birds that most of us see all too infrequently. With only two and one sightings respectively of these regional rarities, I had high hopes that my willingness to traverse boroughs would be rewarded. But our attempt to track down the first target came up empty. We walked away chatless with a plenitude of feeder birds and a rather voluble Winter Wren as meager compensation. 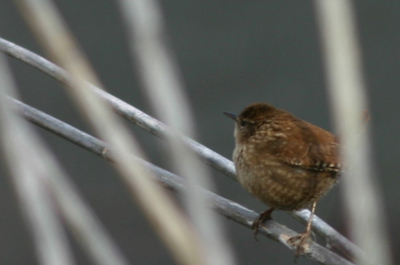 Looping around towards the goshawk brought us beneath a most ambiguous raptor that we only puzzled out after the fact as a Merlin. The loop also brought us down a path where plump Fox Sparrows cavorted in the leaf litter with their ubiquitous White-throated kin. Our path ended at a stand of brush that seemed to be half-hardy heaven, harboring unexpected Hermit Thrush and Gray Catbird, but unfortunately, didn’t end with a goshawk. 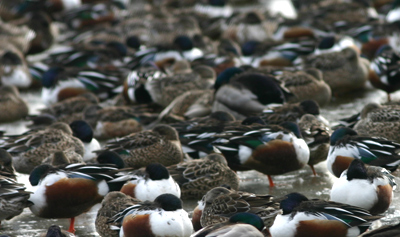 As we hit the flats headed towards one of the one of the few patches of open water on Prospect Park’s massive lake, we spied a non-buteo raptor winging towards distant trees. It very well could have been our quarry but before we could mark its landing point, the cannon crack of breaking ice distracted us. Let this be a lesson to all you bird chasers out there… don’t take your eyes off the prize! All we got for our trouble was a massive mixed flock of Mallards, Mute Swans, Canada Geese, Northern Shovelers, and American Coots, flanked by hundreds of Ring-billed and Great Black-backed Gulls. Actually, we enjoyed these birds quite a bit, even the bedraggled one-legged coot below. 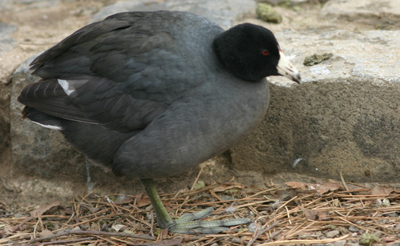 Heading back toward the car, completely unmolested by goshawks or chats, we noted Pied-billed Grebes, American Black Ducks, and Ruddy Ducks mixed in with the mallards and shovelers. Our last birds of the trip weren’t ducks at all but Song and Swamp Sparrows competing for access to open water. If you’re curious, the song sparrows seemed to want that liquid refreshment just a bit more than their dusky rivals. What we wanted, nay needed at this point was warmth so we quit Prospect Park for more civilized pastures. When all was said and done, Carrie did a superior job of sharing her stomping grounds with us. I guess Brooklyn’s not so bad after all. 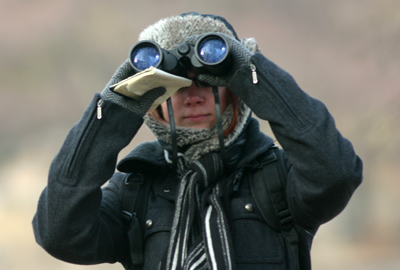