It doesn’t seem that long ago that I visited Jamaica Bay Wildlife Refuge, but in fact, it’s been a month since my failure to find the errant Fulvous Whistling-Ducks. Yesterday, my goal was to locate birds that actually belonged at Jamaica Bay, at least for the current season. Corey, known around here as Bad Birdwatcher #1 for less than obvious reasons, was in town looking for shorebirds, so we hit the mecca. Yes, it is a bit early in the season for the big sandpiper surge. However, if I’ve learned anything as a New York birder, it’s that anything is possible at Jamaica Bay. 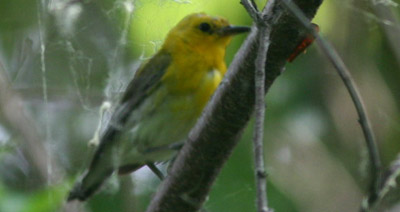 Unfortunately, one thing that wasn’t possible there this weekend was spotting scads of shorebirds. The East Pond was way too high, its paths impassable. Through a break in the rushes, we sighted some Lesser Yellowlegs among the typical Double-crested Cormorants, Mute Swans, Canada Geese, Mallards, and American Black Ducks, but that was all. The West Pond was much more productive. All the expected mimids, icterids, wrens, and swallows were in attendance. We picked up three terns too, the least of which (get it? Least Tern) was a new bird for me. The summer gulls and some sensational Black Skimmers with their preposterous scarlet bills rounded out the larid list.

Long-legged waders are a specialty of this location, and this weekend did not disappoint. Our paths crossed both egrets, both night-herons, the ibis, and both midsize herons – Tricolored and Little Blue. Amazingly enough, Great Blue and Green Heron didn’t pop up. Neither did any saltmarsh sparrows, though Song certainly tried to compensate by belting it out full blast on just about every other reed. We also noted plenty of Willow Flycatchers and a Great Crestedor two as well.

These are the species we anticipated, the ones to seek out at this particular place at this particular time. Expectations of warblers were dutifully low, as they should be in NYC in July. Common Yellowthroat and Yellow Warbler comprise the full list of reliables and they appeared in reliable numbers. We may have also caught glimpses of Black-throated Green and Chestnut-sided Warbler, but really, if someone told me that we were mistaken, I wouldn’t doubt it for a second. Those species aren’t expected around here right now. Neither, I should add, is Prothonotary Warbler, but I’m pretty sure that’s what we stumbled upon in the Gardens! Corey was pishing for passerines more out of habit than anticipation when out popped the bedraggled bird pictured above, burnished gold above and white below with slate blue, unmarked wings. Since it was absolutely silent, we had only visual cues to work with. My first thought was Yellow-throated Vireo while Corey considered Yellow-breasted Chat, but the bird’s markings and beak structure deep-sixed both of those ideas. No, this luminous yellow fellow (the black bill denotes a breeding male) seems to be my very first Prothonotary. Anything is indeed possible at Jamaica Bay. 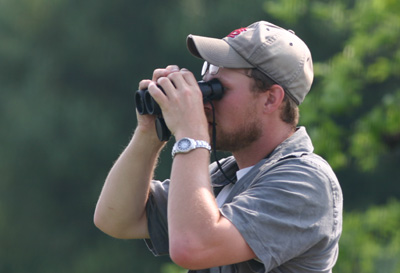