Temperatures well below the freezing mark? Arctic wind howling down from the north? Sounds like a great day for the beach! Actually, if you leave the bathing suit at home and bring binoculars instead, you could do much worse. Winter on the Atlantic coast introduces an array of seaducks, shorebirds, and tundra breeders impressive enough to move even the most rational individuals to decidedly irrational acts. What else could explain my perilous exposure to the aforementioned cold and wind?

When last we left our heroes, Corey, Will, and I had dipped, as they say in the vernacular, on the storied Smith’s Longspur of Jones Beach. We did spot longspurs of the Lapland variety as well as larks, buntings, and other winter beach birds, yet these beauties were not enough to assuage our avian interest. Corey and Will were in the middle of a veritable birding rampage, twitching a tear up and down the Empire State. They had a lot more birding in them while I had just a bit more. Fortunately, Point Lookout lies exceedingly close to Jones Beach. I could manage that much.

On the quick trip to Point Lookout, I spotted both Great and Double-crested Cormorant. Once we arrived, I saw only streams of sand driven down the desolate beach by a pitiless wind. Actually, upon closer inspection, an astonishing level of biodiversity became apparent. Sanderlings, which I normally associate with summer surf, seemed right at home amidst the frigid waves. Canada Geese, Brant, Mallards, and American Black Ducks flocked in the same multitudes they manifest in any park lake. And for once, we weren’t just faced with the same old gulls; lovely, little Bonaparte’s Gulls flitted around fetchingly.

The real action in a spot like Point Lookout, open ocean segmented by a series of jetties, tends to be right out where rough water meets smooth. Unfortunately, the stiff wind was whipping everything into a froth. Small groups of Red-breasted Mergansers, positioned in the shelter of the jetties, made up most of the winter duck contingent. We were lucky enough to pick out a few Horned Grebes and one Red-necked one, a couple of Common Loons, and a single Long-tailed Duck in flight. Other than those birds, seaducks were surprisingly scarce.

Grebes, loons, and mergansers were about all I expected from Point Lookout. Corey, on the other hand, had more experience with this spot. He informed me that he had never failed to see both Ruddy Turnstones and Purple Sandpipers out here in winter. Purple sandpiper, you say? This drab, cold-weather calidrid has eluded my sight for a long time, so despite Corey’s confidence, I wasn’t very hopeful. Since I expected little, I wasn’t disappointed as we moved from jetty to jetty without success. Imagine my surprise, then, when we spotted shorebirds cavorting on the rocks of the last jetty between us and our cars. First popped up a Ruddy Turnstone, a species I’ve seen exactly once before. Next came another turnstone, and third, my life Purple Sandpiper! We enjoyed brilliant looks at these birds, backlit though they were. I particularly enjoyed how a turnstone and sandpiper would share the same mussel-encrusted rock long enough to highlight all of the differences in color and form between the two birds. Note the streaked sides of the sandpiper in flight below. 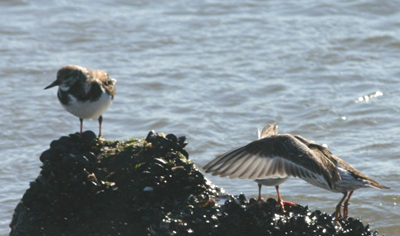 Corey managed better photos than I did, thanks to his willingness to scramble over the icy rocks to get better light.Â  He also describes the morning’s events quite well on his own blog, lovely dark and deep. Check it out to see how he and Will made out once we parted ways.