There are a few birds up here that, while we may find as just part of the fauna, others would foam at the mouth for a chance to see.  Ivory Gull? We’ve got those. Common Ringed Plover? In spades. Northern Wheatear? Of course. Breeding plumaged Lapland Longspurs, Red-throated and Pacific Loons? Yawn.

But birds get lost, or driven out of their way by storms, and just like the Ivory Gull that shows up on a California beach, we have birds that end up here, well out of their way.  Birds that leave people scratching their heads. My first Spring here, when I was still stunned at the uniqueness of the place, I was already used to the fact that you don’t see birds perched on wires. Not on a regular basis. It was so unusual that when I drove by one that June I turned around to see just what the heck it was. Once my brain registered that it was actually a small passerine up there.

I was very surprised to see that it was Barn Swallow.  One very miserable looking Barn Swallow.  In Early June there are not a lot of insects on the wing and up away from the microclimate of warmth at the ground it would be a very different environment than what it was used to.  I drove back to the detachment, picked up the clunky old binoculars and went back to watching it.  The next day it was gone, and I never saw it again. The next spring, the wildlife officer saw another Barn Swallow at camp, a couple of hundred kilometres south of here. She also described it as one miserable looking bird. A Barn Swallow, not looking miserable (photo by Mike Bergin)

Tim Barksdale, a friend and cinematographer, was up a few years late to film Arctic birds. One day he ended up at the dump because he needed some Raven footage, and normally that is a sure place to get Ravens close up. What he did film surprised us both.  Not only were there no Ravens to film (I was up at the airport watching a family of Ravens peeling tape off boxes of cargo left outside to load onto the south bound flight) but he found a pair of White-crowned Sparrows. Tim filmed a bird he certainly never expected in the Arctic. My photo with a small point and shoot, seems to show just garbage. But I know one of the birds is in it somewhere.

Both of the species were a long way from the tree line, the nearest place you could reasonably find them (The tree line is, oh, about 1,600 kms or 1,000 miles away, at its closest point). But I suppose that’s the whole idea behind rare vagrants.  They aren’t where they are supposed to be. A juvenile White-crowned Sparrow, not above the treeline (photo by Corey Finger)

This past week a vagrant showed up in Nunavut that caused a minor sensation. This is a small place for a spot with one fifth of Canada’s landmass.  There are less than 30,000 people living here. So when you get the reputation as the bird guy you get questions.  A friend of mine, and a superb photographer, from Pangnirtung, David Kilabuk, heard about an unusual bird that showed up along the shore there, and during lunch grabbed his camera and went to look for it. He quickly snapped some record shots of it, a bird that you don’t often see photographed with snow coming down about it.

When he posted it on Facebook, wondering what it was, another friend (and another superb photographer – I keep hoping it will rub off on me) tagged me, knowing I’d know what it was. I did. It was a juvenile Great Blue Heron, a bird whose normal range is a couple of thousand kilometres away. “For the last time, I’m NOT a Sandhill Crane” (photo by David Kilabuk)

Whether it was blown north by some of this seasons storms that moved up the east coast, or was simply lost we’ll never know. But it was news, David and I both ended up on a popular morning show here on CBC. The bird, has apparently moved off, whether it will survive or make its way south is debatable, but unlikely.

Pangnirtung is also on Baffin Island, so some might be wondering if I twitched the bird. Baffin Island is a big place, the fifth largest Island in the world, and Pang lies quite a distance away. A little over a thousand kilometres to be exact. I’d not be able to drive there, flying is the only option up here. The cost of a ticket? $2,944.00.

I’ll wait for the next rarity to show up here in Arctic Bay. 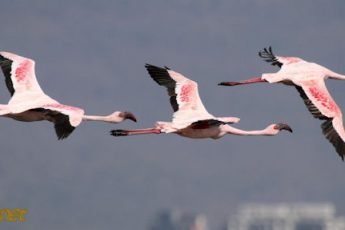 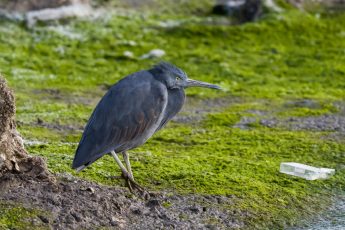