Along Broome’s coastline there are a lot less shorebirds during this time of year and those that do remain are either non-breeding migratory birds or they are resident shorebirds that breed along our coastline. The Pied Oystercatchers are predictable each year and have just laid their first eggs and the Red-capped Plovers already have young. On a recent beach walk we were suddenly halted in our footsteps by a sudden panic “broken wing” display by a female Red-capped Plover. In this situation we always stop immediately because the chicks or eggs may be a lot closer than you think. Due to the fact that we were on wet sand and the tide had fallen we knew it was a situation of chicks being close by rather than eggs. We looked around and soon established that we had two very young Red-capped Plover chicks almost at our feet. We moved back and waited to observe the adult female move towards the chicks and then the careful procedure of hiding and protecting them under her wings. She stood tall and let them under one by one. Once both of her chicks were tucked under her wings she spent her time watching carefully for any predators and she appeared to be a rather large bird that had six legs! Should you ever be on a beach and you have a bird dragging its wings and tempting you to follow it then that is exactly what you should do! The bird is leading you away from its eggs or young and you should follow. If it does not move, but only drags its wings then you need to take care, because you may be extremely close to either a nest or young and there is a risk of damage if you don’t look carefully around before proceeding. If you experience either of these behaviours then please treasure the moment and observe from a distance.

The feature photo at the top does contain all three birds, with one chick each side of the female Red-capped Plover! 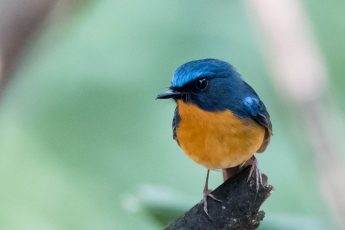