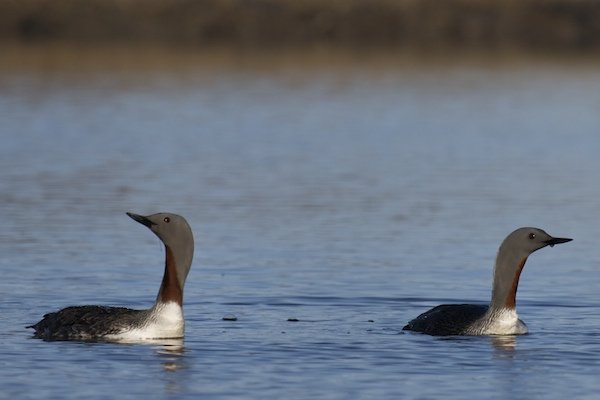 If you’re a mom or dad, chances are that at some point you fantasized about the day your little one would be able to assemble his/her own breakfast, thus scaling back your kitchen duties (and buying you a few more moments of shuteye). Well, if you were a Red-throated Loon, like the pair in Clare K.’s photo who blissfully have no idea what’s in store for them, nature would be on your side. Recent research published in The Auk suggests that these chicks fledge early just so they can get their own grub.

Scientists spent long days in the Arctic studying the growth of Red-throated Loon chicks in hopes of better understanding how their energy needs match up to their size. (Along the way, they braved sleepless nights and sleeping bears.) Their work found that young loons fledge before they reach their final adult weight. This helps spare parents the aggravation and exhaustion of ferrying fish from the ocean to the fishless lakes where the chicks are raised.

What are the takeaways? (Pun half-intended.) Evolution often helps ingeniously solve puzzles, and more research is perhaps in order to see if birds from other species follow similar patterns. And for me, it’s a reminder that I need to pick up a copy of the (soooo NSFW) You Have to F–king Eat.

The Central Park Effect is on HBO Tonight