If one was a serious twitcher – kinda like Phoebe Snetsinger (who saw approximately 8,400 species before her death), Tom Gullick (reputedly the first person to see over 9,000 birds) or me (17 species at last count that I’m sure of) – where would be the most remote place in the world that one would have to travel to see an endemic bird species? Well that depends on several factors, the most important of which are the definitions of the terms “remote” and “endemic”. My subjective thoughts on remoteness are that the term should be defined by two factors:

1. How difficult is the place to reach in terms of planes, trains and automobiles? Basically, if you can fly or drive there, it doesn’t count.

2. How far is the closest human settlement?

A definition of the term “endemic” is also not clear-cut unless you set subjective boundaries and limitations. Does the word define a species within country terms, regional terms etc? Is the term defined at the sub-species or full species level in terms of classification? Again, my thoughts on this are determined by two factors:

1. The species must be listed as a separate, full species by both of the most widely used ornithological bird lists, Sibley/Monroe and Clements.

2. The species must be restricted to an internationally recognized country, island or island group.

And lastly, I felt it important to consider this final question when deciding on the remotest endemic birds:

How likely is it that the species can wander outside of its normal range? In other words what are the chances of one of these extremely remote species showing up in a less remote place – like my backyard in Lake Worth, Florida?

Taking these parameters into account let’s start with some of the remotest places on planet earth. In terms of the above definitions of the term “remote”, the bottoms of our oceans surely fit the profile. Only problem is, last time I checked there were no birds down there, let alone endemic ones. So we can rule that one out. Ok, so what about the highest mountains, you might ask? Some mountain tops are pretty remote, no? They are difficult to reach and some are in far-off locations. Well yes, but all of the planet’s tall mountains are relatively close to some form of human habitation.  Some rain-forests could rightfully be termed remote but again, human habitation is actually relatively closer than what one might think. Antarctica, perceived by many as the most remote place on our planet, is actually relatively close to some form of human settlement. Additionally, each of Antarctica’s so-called endemic species (Emperor Penguin, Antarctic Petrel and South Polar Skua) actually wander more widely in the southern oceans and have been known to turn up in other locations. That leaves us with the world’s islands. No places on earth are further removed than the world’s tiniest slithers of land. Some of these islands cannot be reached by any mode of transport except a long ocean crossing and some are well over a thousand miles from the closest human habitation. Let’s explore some of these far-off places and the birds that find shelter here. Two of the remotest islands in the world are Easter Island in the South-eastern Pacific and Bouvet Island in the South Atlantic. However, both these islands do not have any extant endemic species of birds and Easter Island, although 1,300 miles from the nearest inhabited land, actually has an airport, making it relatively accessible. The Heard and Mcdonald Islands are also extremely remote and Clements lists the Heard Island Shag as a full species, although Sibley/Monroe lists it as a subspecies of Imperial Shag.

There is one bird species that, according to my above categorization, is quite possible the single most remote species of bird in the world. It lives on the Kerguelen Island chain, otherwise known as the Desolation Islands, and also on the nearby (relatively) Crozet Islands. The Desolation Islands are more than 2,000 miles from the nearest permanent human habitation (besides research stations) and can only be reached by a long ship journey. This bird is the Eaton’s Pintail, a bird so remote that only a precious few explorers and scientists have ever laid eyes on one in the wild. Its numbers are declining rapidly due to feral cats and this duck is currently listed as vulnerable. Saint Helena Island, situated in the south Atlantic ocean between the continents of Africa and South America, is one of the remotest inhabited islands in the world. It lies over 1,200 miles from the African continent and more than 1,500 miles from the nearest inhabited island. The only way to reach the island is by ship. There is one endemic bird, the Wirebird or St. Helena Plover, believed by some to be a sub-species of Kittlitz’s Plover but recognized by both the above-mentioned lists as a full species. The bird is critically endangered with only about 250 birds remaining. There is another permanently inhabited island that is even more remote than St. Helena and professes to hold the title of “remotest inhabited place on earth”. And that is Tristan da Cunha Island, situated 1,750 miles from Cape Town, South Africa and over 2,000 miles from the closest point in South America. The Tristan da Cunha islands consist of the main inhabited island of Tristan and the uninhabited islands of Nightingale, Gough and the aptly-named Inaccessible Island. Like its distant island neighbor to the north, Tristan can only be reached by ship and its population of 264 people rely on farming, fishing and supplies from fishing vessels that arrive from South Africa about 8 times a year.

There are six species of endemic birds on the archipelago, including three species of bunting that exhibit similar evolutionary characteristics of the Galapagos finches. Perhaps the most unique and enigmatic of these six birds is the Inaccessible Island Rail, the world’s smallest flightless bird and found only on the island for which it is named. The bizarre Tristan Thrush, or Starchy as it is called locally, has adapted to predating on the avian life of the island group. These predatory thrushes have been known to prey on albatross and Spectacled Petrel eggs, the young of Great Shearwaters and have even been known to remove storm-petrel species from their burrows and kill them. The other four endemics are the critically endangered Gough Bunting or Finch, the Nightingale Finch, the Wilkins’s Finch and the Tristan Moorhen. Tristan da Cunha’s six endemics are quite possibly the remotest group of endemic birds in the world. So what are the chances of any of us mere mortals ever seeing some of these birds and adding them to our lists? Almost as good as someone finding an aquatic eagle with gills that preys on lanternfish at the bottom of the ocean. 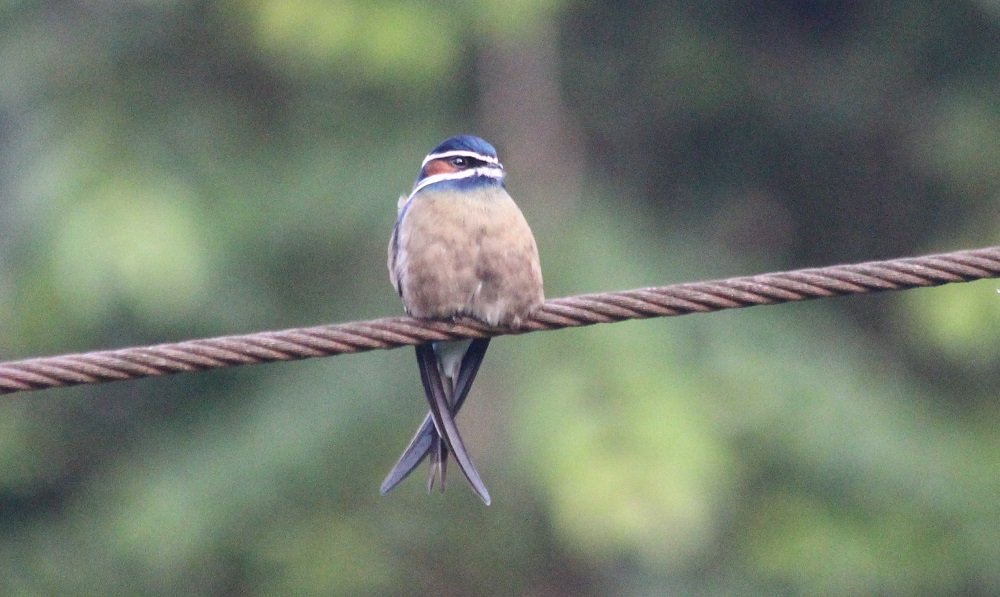