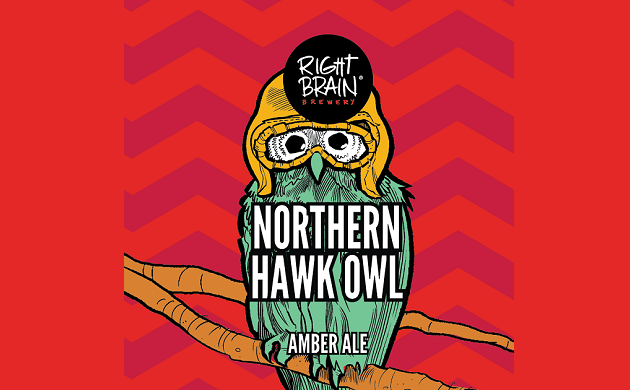 Today is Black Friday, the notoriously chaotic and sometimes violent shopping day that comes a day after American Thanksgiving. It’s also notable for being one of the few days on the calendar on which nonbirders can be expected to wake up even earlier than birders, as zealous holiday shoppers bivouac in below-freezing weather at the doors of big-box retailers, readying themselves to batter down the gates at daybreak, along with goodness knows what other strange traditions take place on this unholy day.

I plan on spending most of this morning far away from any shopping mall, cruising around the farmland roads of northern Franklin County in New York’s North Country in search of birds. For several years now, I’ve spent the Thanksgiving holiday at my partner’s childhood home here, just a couple of miles south of the Quebec border. I always try to get in as much birding as I can, and anytime I head north in winter, I get excited about the prospect of irruptive visitors from Canada, being that much closer to their usual ranges in the boreal forest. Last year, we had Evening Grosbeaks (Coccothraustes vespertinus) show up at the feeders as soon as we finished our Thanksgiving meal, and later that weekend, we found Pine Grosbeaks (Pinicola enucleator) on our way back home, both of which were much more exciting than turkey. 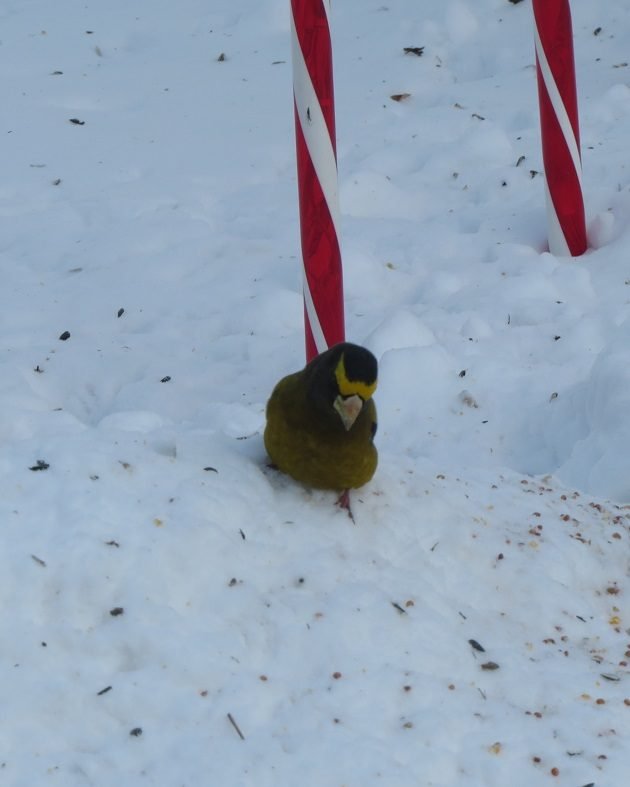 Unlike last year, it’s not supposed to be a good season for “winter finches” in the Northeast this year, so I suppose I shouldn’t get my hopes up about even rarer irruptive visitors from the Great White North – birds like the Northern Hawk Owl. But one can always hope – and look. I’ve never seen a Northern Hawk Owl (Surnia ulula) – and I think it’s been several years since one last strayed into New York – but I do know that in winter excursions south, they often favor open farm country and sitting atop prominent perches, from which they give their hard, disapproving stare to all passersby. Seeing as how I’ll be in such habitat today, I’ll be watching the tops of trees and utility poles as I drive by the frozen farm fields – though I’ll undoubtedly have to content myself with sightings of more common winter field birds like Horned Larks and Snow Geese.

The Northern Hawk Owl isn’t exactly a household name as far as birds go, and before this week, I would’ve guessed my chances of finding a Northern Hawk Owl beer were about as good as finding a real, live one this morning – which is to say slim to none. So, it was a real surprise to find that Right Brain Brewery of Traverse City, Michigan, makes an amber ale named Northern Hawk Owl. Admittedly, if it weren’t for the brewery spelling it out in the name of the beer, I’m not sure I would be able to identify the owl depicted on the can as Surnia ulula. Rather than the stern and surly glaze usually associated with this bird, we get a friendly-looking cartoon of an owl wearing a winter hat and a ski mask – or is it a bomber hat with aviator’s goggles? 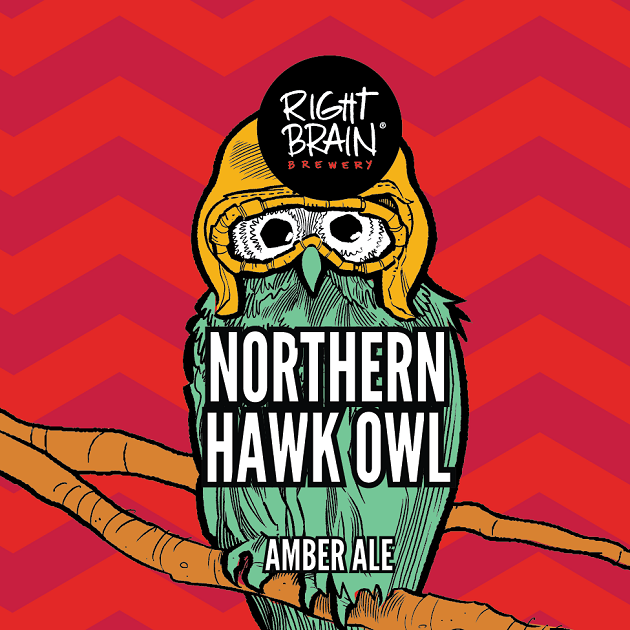 So, while it’s not the most ornithologically faithful likeness of a Northern Hawk Owl, Right Brain’s heart was in the right place with this beer, which they “brewed in honor of a small owl that lives in northern Michigan and is only active during the day.” And in addition to being a fun tribute, it’s always nice for us to have a modest, understated style of beer to review, especially in this age when the craft beer cornucopia seemingly overflows with nothing but hazy IPAs, pastry stouts, and fruited sours. American amber ale was once a darling of the microbrewing scene in the early days, back when the mere mention of color in a name was enough to distance craft beer from the pale yellow and fizzy industrial stuff. Since then, amber ales have taken a backseat in popularity to more ostentatious styles, but thankfully they’re still around, and it’s good to see brewers giving them the attention they deserve. Forsaking the excesses of more attention-getting styles and settling into an easy-drinking balance between caramelly malt and hoppy bitterness, a well-made amber ale makes for a perfectly flavorful and extremely quaffable pint.

Right Brain’s Northern Hawk Owl Amber Ale straddles this malty and hoppy divide quite adeptly, just as the bird it’s named for embodies both owl- and hawk-traits. This dark, copper-hued ale offers aromas of toffee and sticky, rising dough, with accents of cherry cordial and a dose of herbal hops redolent of sage. The medium-bodied palate is sweet with malt and caramel and a touch of toasted walnuts and ends with a slightly tart candy apple finish, making Northern Hawk Owl Amber Ale a wonderful late-autumn beer to warm up with after some holiday weekend birding. 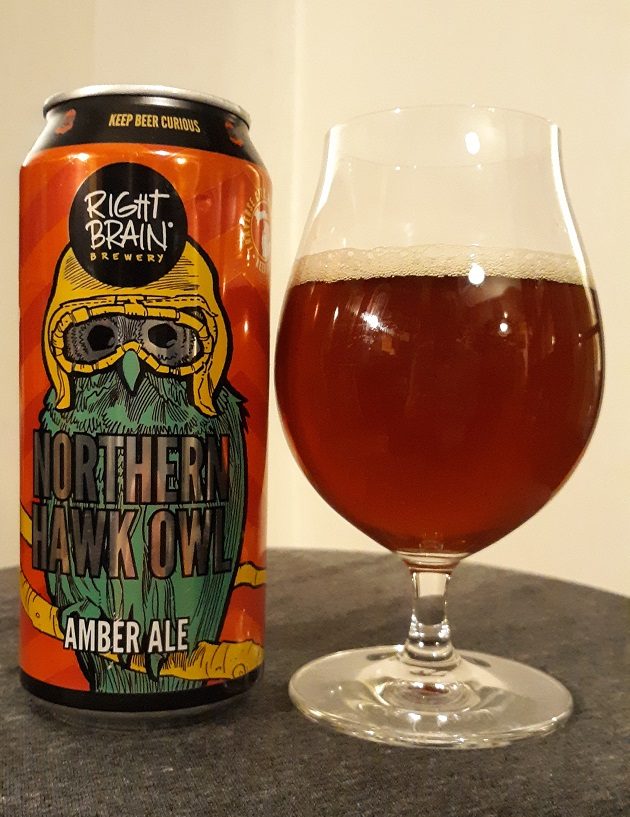