Say Hello to the Sulfur-breasted Parakeet 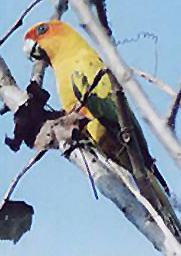 When it comes to the number of existing bird species, the math tends towards subtraction rather than addition. The most recent tale of extinction that comes to mind is that of the poor Po’ouli, but extirpations of avians abound. The loss of even a single bird species is tragic, yet if there is any comfort, it may be that nature possesses secrets we’ve yet to learn and unfolds them passing slowly. One example is the Pink-headed Duck, last seen in June, 1935 in Darbhanga, Bihar (which I believe is in India.) A team from BirdLife International doing bird surveys in Burma in late 2004 saw a bird which they’re “99% sure” was this errant waterfowl. Talk about a long-lost friend!

Another bird in the plus column is Sulfur-breasted Parakeet, a parrot that has eluded ornithologists for centuries. Again, BirdLife International is on the scene:

A new species of parrot has been described from the Amazon river basin. Although scientists have known about the existence of the Sulfur-breasted Parakeet, now formally named Aratinga pintoi, for around 100 years, its true identity has only just been revealed. The new species is closely related to the Sun Parakeet A. solstitialis found in Guyana and northern Brazil, and Golden-capped Parakeet A. jandaya from southern Brazil.

“The confusion has arisen because people studying museum skins of Sulfur-breasted Parakeets mistook them for juveniles of Sun Parakeet,” explains LuÃ­s FÃ¡bio Silveira, lead author of the paper in The Auk (122(1):292â€“305, 2005) describing the new species. “This was partly because most of the museum specimens in Brazil were of Sulfur-breasted Parakeets, whilst specimens in America and Europe were mainly Sun Parakeets. People never had the opportunity to compare the two side by side.”

The two parrots have very different plumages. In particular, Sulfur-breasted Parakeet differs from Sun Parakeet in its paler, greener crown, paler orange forehead and cheeks, a greener back mottled with flecks of green, and a sulfur-coloured, not orange breast.

Does this mean there’s still hope for the Ivory-billed Woodpecker?