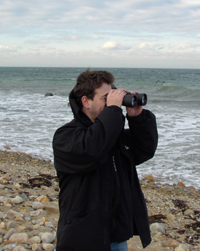 The Core Team chose to end 2003 strong. We explored some new terrain today, namely Montauk Point. Montauk is on the easternmost tip of an exceedingly Long Island. The trip is well worth it though. The Point is one of the most rugged, magnificent stretches of Atlantic Coast in the Northeast. If you’re interested in birds, don’t wait until summer to visit this beach. You want to be there now.

Winter is a special time in Montauk because the frigid waters off the point are actually quite balmy for certain bird species from the north. Like juncos and the White-throated Sparrow, these birds consider our frigid clime a proper winter getaway. I suppose every place is “south” for somebody.

There is a long list of birds that can be seen on the East End of Long Island this time of year that are hard to find anywhere else in New York. I’m pleased to say that we came up with some of them, although by no means all. Our sole regret is that we did not have a spotting scope on this trip (still waiting for that sponsorship!) A scope is essential equipment for spotting sea birds.

The first thing we noticed after our 130 mile span of Long Island is that Montauk Point attracts a lot of gulls. We saw all the usual suspects: Herring, Ring-billed, and Greater Black-backed. We also saw one Bonaparte’s Gull, so much smaller than its peers. But the flyer that caught our attention was no gull at all, but a booby. The Northern Gannet is a large pelagic bird that only comes ashore to breed. The gannet is the largest member of the unfortunately-named booby family and the most common on the Atlantic coast. It is also a magnificent sight, strong and confident in the air.

We saw plenty of mature and immature gannets, but didn’t spot any shearwaters. We were probably too busy looking at the flocks of waterfowl riding the waves. The easiest ones to identify were the Red-breasted Merganser; there were at least 30 male and females. We also had no trouble picking out the distinctive sloping profile of the Common Eider. With a scope, we might have spotted a King or two mingling with the commoners, but we’re content with one eider for now.

Scoters are another story. Scoters are sea ducks with exceptionally funny looking bills. There are three species of scoter in the world (not counting subspecies) and we just saw them all. The Black Scoter, Melanitta nigra, also called the Common Scoter, is identified by its entirely black plumage and brightly colored bill. The Surf Scoter, Melanitta perspicillata, is known by many other names; Red-billed Scoter, Skunkhead Coot, Spotty-nosed Scoter, and Surf Duck are just the English ones. Skunkhead is most apt because of this black bird’s prominent white patches on its nape and forehead. The last species, the White-winged Scoter, Melanitta fusca, is easiest to spot because no other scoter has white wing patches. Three scoters plus a gannet and an eider makes five new species…a great end to a fantastic year of birding.