Searching for the Puerto Rican Parrot

Way back in January Mike and I made a quick trip to Puerto Rico with the hope of cleaning up on all of the endemic species on the island. I’ve been lazy about blogging about our birding adventures there but the recent hurricanes and Jason’s excellent post on the idea of including Puerto Rico in the ABA Area have spurred me into action once again. But instead of picking up chronologically from where I left off I have decided to skip ahead to our last evening in Puerto Rico when we were going for the biggest prize of all the Puerto Rican endemic birds, the Critically Endangered Puerto Rican Parrot.

The location where we would seek out the parrots was easily decided upon: the Rio Abajo Nature Reserve is now known as the easiest place to see a Puerto Rican Parrot outside of captivity, though success is by no means assured. Wild parrots fly to roost near the captive birds in the aviary in the evening and the idea for birders is to hike to the gate outside of the aviary and wait until near dark with the hope that you’ll catch a glimpse of at least one parrot as it flies in for the night. Some birders get there and manage not to see the birds:

To make a short story extra short, the forest here was mature and really nice to walk through, but the only one of us who really saw the parrot was Officer Searcy, and his looks were poor poor poor poor poor poor poor. There are hardly any canopy openings…I’m surprised folks actually see them so regularly. I heard them well (free-flying birds, not the enclosed birds at the end of the road), but that is nothing to write home about.

Mike and I hoped to be more successful than Seagull Steve but his story had us scared. We needed to see a parrot on the one evening we had left, 17 January, and failure was not an option. To ensure success we arrived waaaaay too early at Rio Abajo and spent quality time birding some roadside habitat, reacquainting ourselves with some of Puerto Rico’s endemics like the Puerto Rican Bullfinch, Puerto Rican Vireo, and Adelaide’s Warbler, all birds we would have been freaking out over finding a mere three days earlier.

Eventually, we drove to where we thought we should be, at a location where a gate blocks the road. The instructions we had were for us to leave our car here, not blocking the gate, and to walk up the gated road until we came to a second gate, which is near the aviary and where birders have had success. The walk seemed to last forever, to the point where both of us got nervous about being in the correct spot. What if there was another road blocked by a gate that we were supposed to take? Could we have ended up on the wrong road?

Fortunately, our concerns were groundless and we ended up at the second gate well before dusk. (You can see Mike mugging in front of it at the top of the post.) It is an imposing gate that serves the purpose of keeping curious birders and those with more nefarious schemes from the aviary where the captive Puerto Rican Parrots live. 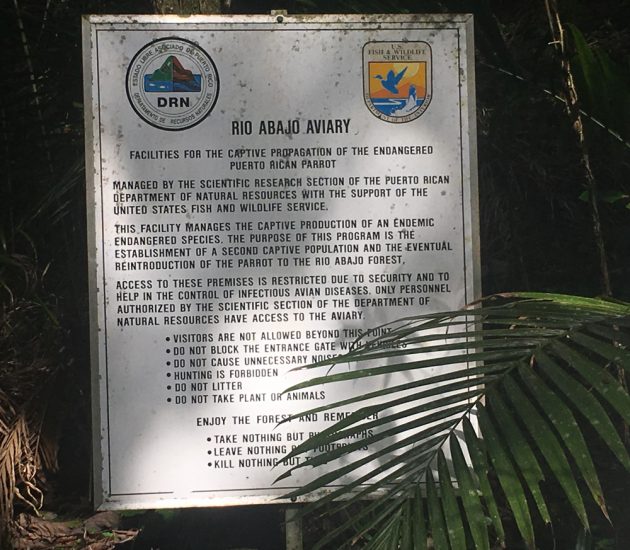 The signage is informative, though it could be more friendly. How about some pictures of parrots? 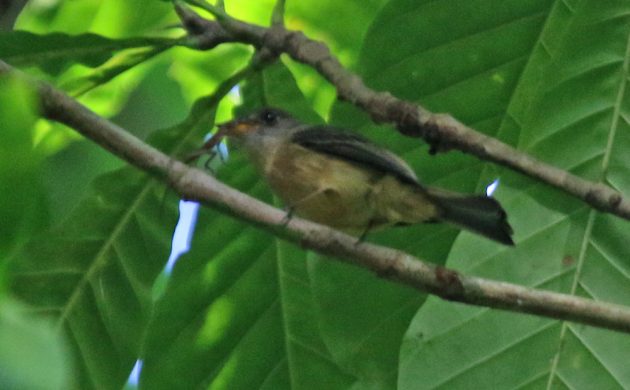 But mostly we waited, occasionally hearing parrots calling from the aviary. A couple of times the gate opened which was exciting at the time, as we had been waiting. Once, it was to let a car out with some of the aviary workers and once it was because one of them was going jogging. Then, our vigil continued.

While we waited some more we began to discuss leaving. After all, that bird flying in might have been it and it was getting late and we were hungry and had a long walk followed by a long drive before we could eat. Then we heard another bird. And then we saw it. This second parrot flew through the trees instead of over them and it STOPPED DIRECTLY OVERHEAD! GREAT AUDUBON’S GHOST! THAT’S AMAZING!!! 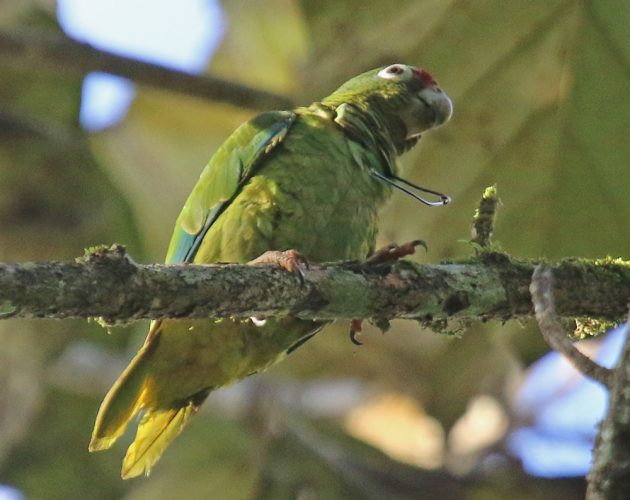 Yes, it was covered in scientific detritus but it was still a free-flying Puerto Rican Parrot that we could see!

We stared through binoculars and I released my scope from its perch on the tripod and handheld some digiscoped shots at an angle too high for my straight-through scope to handle on the tripod. Then we stared some more at the bird that seemed in no rush to go anywhere and at least mildly curious in the gibbering apes beneath it. 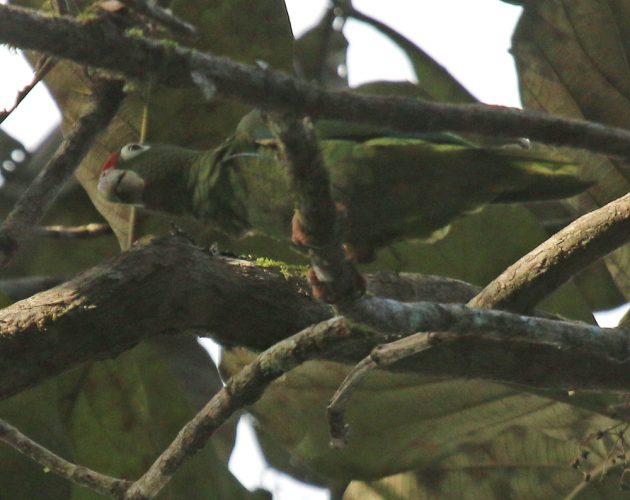 It was amazing, it was awesome, it was astounding! This bird stopped directly above us as if it were a gift from the birding gods. We drank it in until it, eventually, flew on to the aviary.

With huge grins on our faces we walked back to the car, hardly paying attention to anything but the feeling that we had just managed to see a Critically Endangered species and we had managed to see it well.

And, as icing on the cake, we heard and saw a Puerto Rican Screech Owl about an hour later to finish our endemic sweep!

When Hurricane Maria passed through and devastated Puerto Rico the parrots rode out the storm inside their hurricane-proof shelter. Unfortunately, of the three areas with free-flying Puerto Rican Parrots at least one, El Yunque, was horribly damaged. One way you can help all of the species effected by the hurricanes in the Caribbean this year is to donate to Birds Caribbean.