Get your surfboards ready bird-blog aficionados!  This wave of new beat writers on 10,000 Birds might very well sweep you off your feet and who knows on what shore you might wash up.  After introducing our first wave of 10,000 Birds beat writers last week we were drowning in the positive responses, both here on the blog and on Facebook.  And now that you have gotten a taste of what the 10,000 Birds beat writers are capable of I hope you agree that the concept is getting on swimmingly!  Despite the high water mark set by the first wave we think that the second wave has at least a chance of flooding the bird blogosphere…wait, what?  The whole wave/water extended metaphor thing is labored and pointless?  Fine.  I’ll wash my hands of it then (Ha!).

In all sincerity, and I think I speak for Mike and Charlie as well, I have been greatly humbled by both the willingness of those we ask to participate to join with us and by the support we have received from the online birding community as the beat writer concept has moved forward.  And I think that this particular group of bird bloggers is a great fit for 10,000 Birds and that our readers will love reading them both because we were careful to select the cream of the crop in terms of blogging ability and because they will offer more of an international perspective, something that we at 10,000 Birds have striven for since Charlie and I joined up with Mike many moons ago.

So, who are the bloggers that make up the second, international, wave?

Dan Rhoads, who should be familiar to you as the man behind Migrations.  He does his best to keep 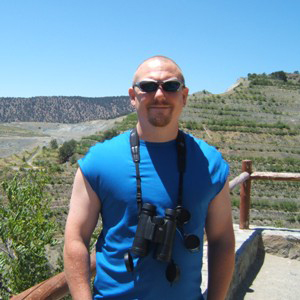 the trappers of Cyprus in check.  Dan will be joining us as, what else, our Cyprus beat writer.  He will be writing every other Friday and on occasion as events in Cyprus warrant.

Dan is an eastern Pennsylvania (USA) native who grew up surrounded by birdwatching and nature documentaries. He caught the itch, so to speak, when he arrived at Sapsucker Woods in Ithaca, New York, and refined his birding skills with the Lab of Ornithology’s Spring Field Ornithology course. While there he studied Molecular Biology, then met a Cypriot, got married, and ended up moving with her to the Mediterranean island nation of Cyprus. Dan is now an active member of BirdLife Cyprus and goes birding on weekends, or whenever his career and family allow. Birds and their conservation locally, he thinks, are things that people need to talk more about in Cyprus, so much that he now blogs and tweets almost exclusively about these topics at Migrations. United States several bloggers contemplated following him there and dragging him back to the states.  Fortunately, cooler heads prevailed, and while we may have to poke Jochen with a sharp stick on occasion to make sure he posts in a timely way he will be blogging monthly on a dual Central Europe and Bird Names beat.

Jochen Roeder was born in Germany and raised to be a birder. He also spent a number of years abroad, just so he could see more birds. One of his most astounding achievements is the comprehension that Yellow-crowned Night-herons do not exist, as he failed to see any despite birding in North America for more than two years. He currently lives near Heidelberg, one of the most boring places for a birder to live, a fact about which he likes to whinge a lot. When he is not birding or trying to convince his three-year-old son that patiently scanning some fields for migrants is more fun than working the jungle gym of a playground, he enjoys contemplating the reasoning behind the common names of birds. to blog under a veil of anonymity.  His beat is International Birding and he might even be birding your local patch right now.  Redgannet’s blog posts will appear once a fortnight.

The nom de blog was adopted to add an air of mystery and make himself more attractive to women.  He has been working for over 25 years as a crew member/flight attendant.   Experiences of too many people for too long in confined and uncomfortable conditions lead him to seek out quiet, open, well-ventilated places, where no-one asks him difficult questions.  His father first whetted Redguga’s appetite for all things natural by buying him his first pair of 7x35s and a copy of Thorburn’s Birds. Having no mentor beyond an indulgent parent, he spent the first season hoping for an Egyptian Vulture to visit the bird table in his English garden. His most memorable birding moment is seeing an Egyptian Vulture with those same binoculars 26 years later.  Redgannet (the blog) fledged in February 2009 and the 100th post was published as he was invited to become a beat writer for 10,000 Birds.  Redgannet is married to Canon, but his heart and half of his house belongs to Helen and their son Joseph.  He is looking forward to communicating with people who don’t ask if he is searching for the “feathered variety” of bird.

Clare Morton will be familiar to those of you who read her guest posts here on 10,000 Birds on the shorebirds that she monitors and protects at Roebuck Bay in Broome, the world-famous shorebird site in Australia.  She will be writing weekly on her Western Australia beat.

Clare and her husband Grant have lived permanently in Broome, Western Australia since 1999 after living in various outback locations around Western Australia and Darwin. Her childhood was spent in the UAE and Kuwait (before the wars) with flamingos being the highlight close to the Iraq border in the early 80’s. 1985 and 1986 were spent working in Maine and Florida before moving to Australia. In the late 80’s she traveled with her husband birding and working throughout Europe and the USA for 2 years. She currently does full time voluntary work for the local Australasian Wader Study Group, which aims to understand and analyze the factors determining shorebird numbers in a rapidly changing world. She is actively involved in fieldwork and maintaining the database. This involves the sighting of these birds both here and overseas resulting in some incredible life stories. She also monitors Pied Oystercatchers breeding along a 23km stretch of beach by bicycle and on foot. She hopes to spread the word about the dangers the shorebirds face as they migrate north each year and the changing bird seasons experienced throughout the year.

Duncan Wright is well-respected here at 10,000 Birds for his tireless and thankless work making sure that Wikipedia’s bird entries are accurate and up-to-date and his even more thankless willingness to comment on our blog posts here on 10,000 Birds.  He will be posting every single Wednesday here as the New Zealand beat writer.

Duncan Wright is a Wellington-based ornithologist working on the evolution of New Zealand’s birds. He’s previously worked on seabirds in California and Hawaii, monkey behaviour in Uganda, sharks in the Bahamas and grasshopper genetics in Namibia. He came into birds rather later in life, and could quit any time he wants too.

James Currie might be a bit too famous to be writing on this blog but we decided to let him anyway.  If 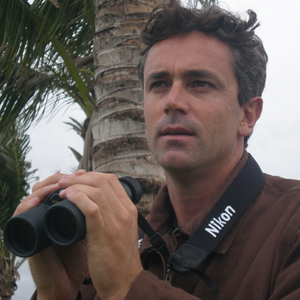 A life-long birder and native of South Africa, James Currie has many years experience in the birding and wildlife tourism arenas. James has led professional wildlife and birding tours for 15 years and his passion for birding and remote cultures has taken him to far corners of the earth from the Amazon and Australia to Africa and Madagascar. He is also an expert in the field of sustainable development and holds a Bachelor’s Degree in African Languages and a Masters degree in Sustainable Environmental Management. From 2004-2007 James worked as the Managing Director of Africa Foundation, a non-profit organization that directs its efforts towards the uplifting of communities surrounding wildlife areas in Africa. James is currently the host and owner of Nikon’s Birding Adventures TV and he resides in West Palm Beach, Florida.

Renato Espinosa is known to 10,000 Birds readers as both the owner and operator of Pululahua Hostal in Ecuador and 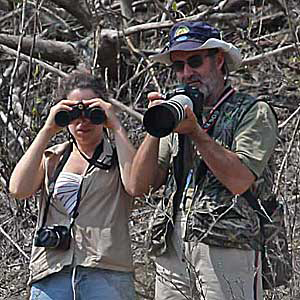 also as a frequent commenter on the blog.  He will be blogging every Saturday as the Ecuador beat writer.

Renato was born in Quito, Ecuador and quickly flew to the USA to learn all about engineering and climbing company ladders.  After getting his engineering degree from the University of Minnesota he worked in the Standard-American-Rat-Race-Company for fifteen years.  After climbing the ladder to where he could no longer see the ground, he decided to jump off the ladder and migrate south like all normal birds do.  To his surprise home did not look like it did when he left as a young fledgling; the towns were bigger, most of his friends had nests of their own, and the countryside was changed.  Shocked by all the change he searched for a new life and a new wife.  He stumbled across a vivacious young chick who would accompany him inside a volcanic crater to set up a love nest.  So, after eight years of nesting inside the crater a new love for nature and birds has sprung a career in environmental conservation and birding tours.  Finally this bird has come home to roost!

So that is it for the second wave of beat writers here on 10,000 Birds.  We are excited to see what they come up with and if they can live up to the amazing contributions of the first round of beat writers and set the bar even higher for the third and final group being introduced next week!