A profound and deep understanding of birds is hard to complain about. When people like Arthur Cleveland Bent and John James Audubon would be envious of your skills, there is reason to rejoice. Besides possessing an encyclopedic memory for field marks, songs, calls, status and distribution of every bird in the world (ask me about the loral coloration of hatch year female Coroneted Fruit-Doves some time), I am able to gain some remarkable insight on what happens under the feathers as well. But let’s face it birders…not everyone can be The Greatest Birder In The World, so I want to discuss something with you today that I feel many people have some great misunderstandings of.

Despite the vacant look in the eye of a Rock Pigeon, birds are not stupid…they cannot afford to be, or else they wouldn’t be here now. Between staying warm/cool, finding food, avoiding predators, migrating thousands of miles every year, finding mates, raising chicks and doing all this at the mercy of the elements, it makes sense that they have more brainpower than just simple instinct to run on. Picture being a Blackpoll Warbler being born in the boreal forests of Alaska. You hatch in June or July. Almost as soon as you leave the nest, you have the strong urge to migrate to a place called “Venezuela”. Can you imagine how many potential choices and decisions are involved in flying from Alaska to the Atlantic Seaboard, flying down the eastern U.S., crossing the Carribean and winding up in South America? Can you imagine doing this when you are a couple of months old?

Let’s cover the basics. Unless you are nothing but the lowly diehard lister, for which you should feel much shame and embarrassment for, birders and biologists alike frequently want to understand birds on a deeper level than how to identify the age, sex and species of a certain individual. What seeds does a Baird’s Sparrow eat? What does a Flammulated Owl do all night? Where do Cook’s Petrels go to forage in the summer? And the ultimate question, the one we may never know the answer to….what is a bird thinking?

This last question is something that I have always considered worth pondering.  And if you look into it enough, it presents a classic case where science can fail us. I think this ridiculously happy looking Laysan Albatross was as stoked as it appears. It was catching raindrops during a storm on Midway Atoll.

Now don’t get me wrong. I believe in science. Strongly. I am friends with scientists. When one looks at theories that both religious texts and scientific texts have offered to explain….well, to explain everything…anyone with a logical mind knows which sources sound a bit too much like nursery rhymes and fairy tales for comfort. Science is based on logic and evidence, which I think is a very respectable way to look at the world.

But what many people fail to realize, and too often scientists themselves, is that science is elastic. We learn new things constantly. Facts are not always black and white. Scientists a 100 years ago would have deemed many everyday aspects of our lives today not only impossible, but inconceivable. You cannot blame them. Even 50 years ago, someone describing the internet as it exists today would come off sounding like a paranoid schizophrenic, at best.

But I digress. For millenia, many of the world’s collective cultures have had an exceptionally strong anthropocentric bias when looking at the value of life.  Non-human beings have traditionally thought of on a basically immoral level…they lack any intrinsic values, are incapable of thoughts and emotions, and are only worth how good of a coat they make or how good they taste. Many of today’s most prominent religions have perpetuated this view. Science, for many years, has done no better. Because its extremely difficult to conclusively demonstrate what any nonhuman animal is thinking or feeling, this lack (failure?) of understanding on our part has morphed into an assumption that animals are simply little robots, acting purely on instinct and nothing else. It is the simplest, and laziest, explanation. It is easy to see this mindset at work among many biologists that Seagull Steve and I have had the pleasure/punishment of working with over the years, and we find it disgusting. Many birds display a strong sense of curiousty. This young Western Gull seems to have no idea what to make of this Mola Mola (Ocean Sunfish), or perhaps it prefers the company of unusual fish.

But many people who live closely with animals, whether as some of the more open-minded researchers or your average pet owners, have always been well aware that this simply isn’t true. The average (responsible) dog-owner does not think of his or her dog functioning on instinct, but as a organism with deep emotional ties to its family that seeks out pleasures and avoids pains….which, fundamentally, is how we people operate. Granted, there are a lot of terminally-stupid dogs out there….but you know what I’m saying. Good parrot owners know the social bonds these birds need to have, or they become angry and depressed, often resulting in the plucking of their own feathers or acting out at people. Of course, it can be exceptionally difficult to prove anything in the realm of emotions in humans (“love”, for example), let alone species we have little or no direct means of communicating with…but in recent years, the concept of non-primate animals experiencing a range of emotions that us people can understand (joy, sorrow, anger, mourning, jealousy, etc.) has gained a solid foothold in the scientific community. I look forward to more research being done in this field.

However, in other realms, science is finally producing a lot of solid data on what many have known for years. With increasing frequency, studies show that animals have substantially more developed brains than people have thought.  There have been a plethora of interesting finds in regards to birds’ memories, technical abilities, communication skills (i.e. Corvids can identify other individuals of their flock by “name”) and even a concept of self as well. Researchers studying African Grey Parrots are doing fascinating work with a lot of the cognitive abilities of this “gifted” species Neither human nor Great Horned Owl can be expected to feel very good after being awoken from a nap.

In birds, the cerebral cortex is proportionally smaller than mammals, which for many years led researchers to assume that they lacked the ability of so-called “higher” brain functions. Recent research has proved time and time again that this image of the dumb, unthinking and unfeeling bird simply isn’t true. Bird brains are simply built differently. Their brains must be small in order for flight…they cannot afford a giant head with a huge brain, or else they would make easy targets for predators.  What they lack in the cortex they make up for in high connectivity between different brain regions, which puts mammalian brains to shame. Bird brains also have the ability to create and shed neurons (the basic functional cells of the nervous system) throughout their life spans, whereas we mammals cease creating them after reaching adulthood. This has all sorts of implications on learning and being more resistant to the mental effects of aging that mammals suffer from.

Birds have been proven to have the abilities to form abstract concepts, make tools, remember the past and plan for the future…I’m sure this is just the tip of the iceburg for what we may discover about them in our lifetimes. If you would like to learn more about the cognitive abilities of bird brains and how they work, there is an excellent article here.

Right. Perhaps you may look at birds a bit differently know, or have decided that old Felonious has gone crazy. Regardless of your conclusions…I must now return to my studies on bourbon consumption and its effects on elderly birdwatchers. Good day to you all. 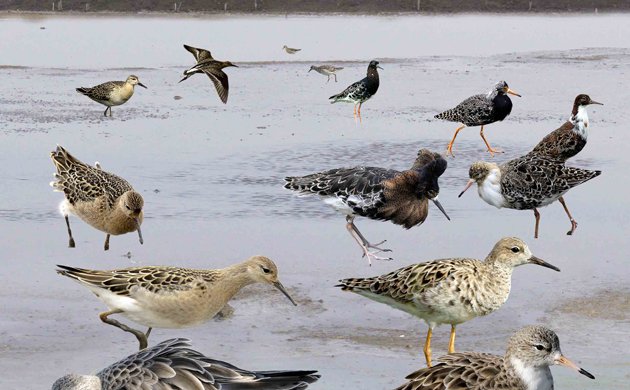 Win a Book From Across the Pond - The Crossley ID Guide: Britain and Ireland