That time of year has come when raptors are on the wing and a young man’s thoughts turn to… Osprey? It’s true. Come September, the denizens of Seattle aren’t the only ones watching seahawks. Nature lovers around the world turn out in hordes to observe the osprey’s southerly migration. However, none have pursued this peregrination as ardently as David Gessner. Having established his bona fides as an unabashed and insightful admirer of this incredible species in the book, Return of the Osprey, he then apparently took leave of his senses, following the migratory route of ospreys from New England to South America with a detour through a certain embargoed Caribbean island along the way. Soaring with Fidel is the tale of that momentous journey.

Soaring with Fidel: An Osprey Odyssey from Cape Cod to Cuba and Beyond shines as an encomium to seahawks in specific, but more generally to all creatures driven ruthlessly by the relentless urge to move in response to seasonal cues. We expect this behavior in birds; as the length of days dwindles, great flocks of raptors and passerines overhead precede the turning of leaves but signal the inevitability of winter with equal assurance. One of the key strengths of Soaring with Fidel, however, is its assertion that humans are also vulnerable to a wanderlust powrful enough to carry a body over mountains, across oceans, and past common sense. David Gessner states authoritatively right at the beginning of his book that humans are never happier than when they are chasing something. He then proceeds to prove that point.

Gessner’s journey begins at Cape Cod, as advertised, just as ospreys are nosing southward towards ancestral wintering grounds. The conceit of the tale is that he attempts to follow one specific bird, tagged with the moniker Fidel for what should be obvious reasons. The intrepid author actually makes it against all odds, not to mention regulations, to Cuba. On his winding way, he breezes through a variety of birding hotspots and osprey enclaves, meeting a cast of characters united in their pure passion for avifauna. I won’t reveal all of the locations on his itinerary; suffice to say, if osprey gather in a place in decent numbers, David Gessner has probably been there.

The writing in Soaring with Fidel is crisp, certain in its rendering of the birds that drive the narrative and the splendid locales through which it is driven. Those afraid that a work depicting a single species might become tiresome need not worry. Gessner’s treatment of ospreys and other birds never seems pedantic or overwrought. Instead, he reveals facts with such fascination and finesse that you can’t help but share his enthusiasm.

While Gessner is both the protagonist and chronicler of this rollicking adventure, I found his presence perhaps a bit too palpable. The details of his improbable journey, the vibrant stops along the way, and those astonishing raptors are sublime, keenly rendered by an artist in full command of his instrument and senses. But when the narrative veers towards the messy particulars of his own role in the drama, the spell is sometimes broken. The disruption stems from two nagging flaws. First, the author repeatedly flouts the TMI rule, revealing far Too Much Information about himself and his bodily functions. This tendency may be forgivable, perhaps even desirable by some readers. The second flaw, however, was a distraction throughout that ultimately tainted the book for me. Simply put, as a father of young children, I could not accept that he left his one-year old daughter behind to embark on this grand osprey escapade. This lone fact took me out of the story at key points, making it difficult to empathize with Gessner through his series of setbacks and serendipities.

Ultimately, Soaring with Fidel reveals itself a fun book with serious insights into human obsession. Caught in the throes of an elemental urge to move, Gessner muses how it was exhilarating to simplify life into quest. If you can accept the premise that a man can get swept up in, as the author describes it, the “great unsettling” and carried on the wings of ospreys to adventure and discovery, this book is undoubtedly for you.

UPDATE: David Gessner responds to my review in the comments below. Don’t miss it! 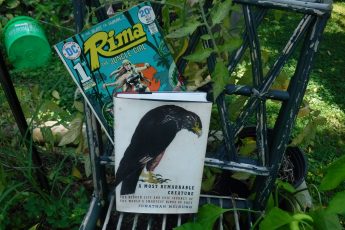 A Most Remarkable Book

Into the Nest: A Book Review in the Time of Nesting