It was only a few days ago, yet it already seems like days long gone. Unlike today’s cold and gloom, it was a warm St. Michael’s summer day and one that beckons to be spent outdoors (Indian summer is locally named after St. Michael whose saint day is celebrated on October 12th).

We were heading to the Djerdap (Iron Gates) Gorge National Park, stretching along the south bank of the Danube in eastern Serbia, to do the 400 km / 250 mi bird tour interconnecting possibly the very best sites around Belgrade reachable within a day. Birding was to be done going back/upriver to Labudovo okno, from one site to another for some 85 km / 52 mi, and when we head back to the city in the late afternoon, there is only 100 km / 60 mi drive left.

The deep beech forest of Djerdap was still full of birds. In two months they will depart for valleys, leaving the bare branches bare of birds, too – apart from woodpeckers – but for now they are in the forest. Actually, broadleaved forest (mostly beech and oak) and scrub cover make up about 70 per cent of the national park, while the rest are meadows and orchards, limestone cliffs, boulders and scree, and the rivers.

From pale-yellow to coppery-red, the road leads up among the autumn leaves. The tree crowns are still too dense to see much and only too often I hear some invisible birds laughing at us. I stop by a side-gully where a small stream trickles in spring. Although the soil is visibly moist, there is no water flowing now. And I do not see any bird either, it was only my bird-compass telling me this is a place to stop.

A sudden flight of a forest ghost, the Black Woodpecker goes from one side of the gully to another. It is the largest woodpecker in Europe (to describe its size, I’ll tell you that Goldeneyes breed in the holes this pecker makes). Its size reflects on its flight, being more straightforward and less woodpecker-undulating. And as a proper ghost-bird, this pecker has an ivory-coloured bill (this is where your eyes widen in amazement). It shows again, flying back. But once it lands, it melts into shadows, becoming a broken tree branch and a bird no more. 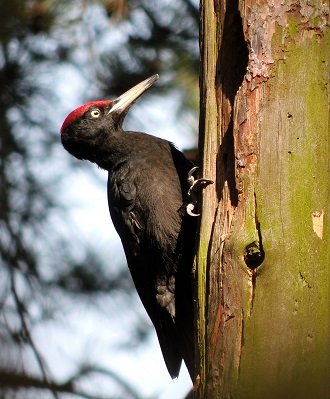 I haven’t seen any bear markings here, okay, the truth is I wasn’t really looking for scratches, but the national Brown Bear range map says that we are passing through permanently occupied part of the range. The birds include Marsh Tits, Treecreeper (Short-toed most likely), Mistle Thrush, Eurasian Wren, a dozen Hawfinches and European Robins each, Common Chiffchaff, Great Spotted and one more Black Woodpecker.

I hear another pecker and stop, J. follows the sound and vanishes into the forest, only to return with a White-backed Woodpecker, the rarest of European woodpeckers, under his belt. Soon afterwards, we leave the forest.

Through old orchards, mountain pastures, meadows and hedges leads a much worse section of the road, destroyed by heavy lorries full of beech trunks logged in the national park and the lack of road repairs. Yet, this is also a part of the international cycling route from Germany to the Black Sea. Despite (or because of) the remains of asphalt, this section is dangerous for low clearance cars or heavily loaded touring bicycles and my eyes were glued to the potholed surface with numerous ridges, rather than bushes full of birds.

But the birds were there, Common Ravens, Common and Black Redstarts, European Stonechats, one Dunnock by the very roadside… Where there is enough flat land by the road (rarely), there are tire tracks avoiding the deep potholes along the roadside. Following one such set of tracks, I noticed some birds in a hedge down the slope and turned the engine off. One more Wren, a Blue Tit, European Greenfinch, then one more Black Redstart and… for a second, one Sombre Tit makes an appearance, not to show itself again. 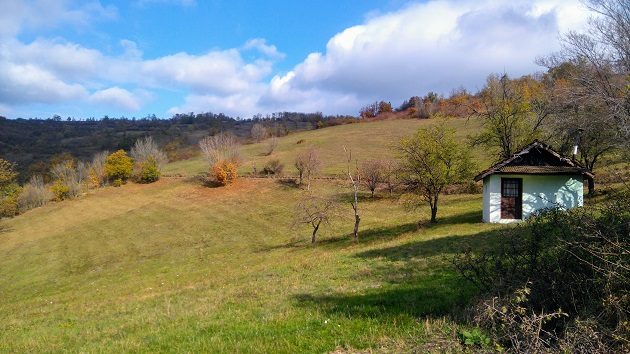 The last area to bird for the day is the Labudovo okno Ramsar site (which loosely translates as the Swan’s Lake). Following the construction of the Iron Gates Dam, 50 years ago, the Danube water levels rose and the river flow slowed down, causing the flooding of several islands and lower banks. Labudovo okno is a 3 km / 2 mi wide and shallow section of the Danube that is known to attract up to 70,000 waterbirds in winter.

I drive along the levee where, hidden from the winds by two partially submerged, horseshoe shaped islands, a line of odd angling cottages is being built against and on the levee itself. They are colourful and small, some mere newspaper kiosks transported here, barely big enough for a bed and fishing rods. The birds include one Eurasian Wigeon male, Great and Little Egrets, Syrian and another Black Woodpecker, one very late Barn Swallow, and an Ortolan Bunting among the House Sparrows on the roof.

I usually end the day watching the sunset underneath the buttresses of the mediaeval Ram Fortress (cover photo), mentioned for the first time in a historical document from the year 1128. Three centuries later, in order to protect the northern border of the Ottoman empire, sultan Bayezid II in 1483 revised and strengthened the existing fortress. As Turkey now sees this fortress as their cultural heritage, they invested 1.2 million Euros in its still ongoing restoration. The towers and buttresses look impressive now, but I tend to like it more the way it looked a few years ago – old. Nowadays it is way too new for my taste. Or is it me who is old?