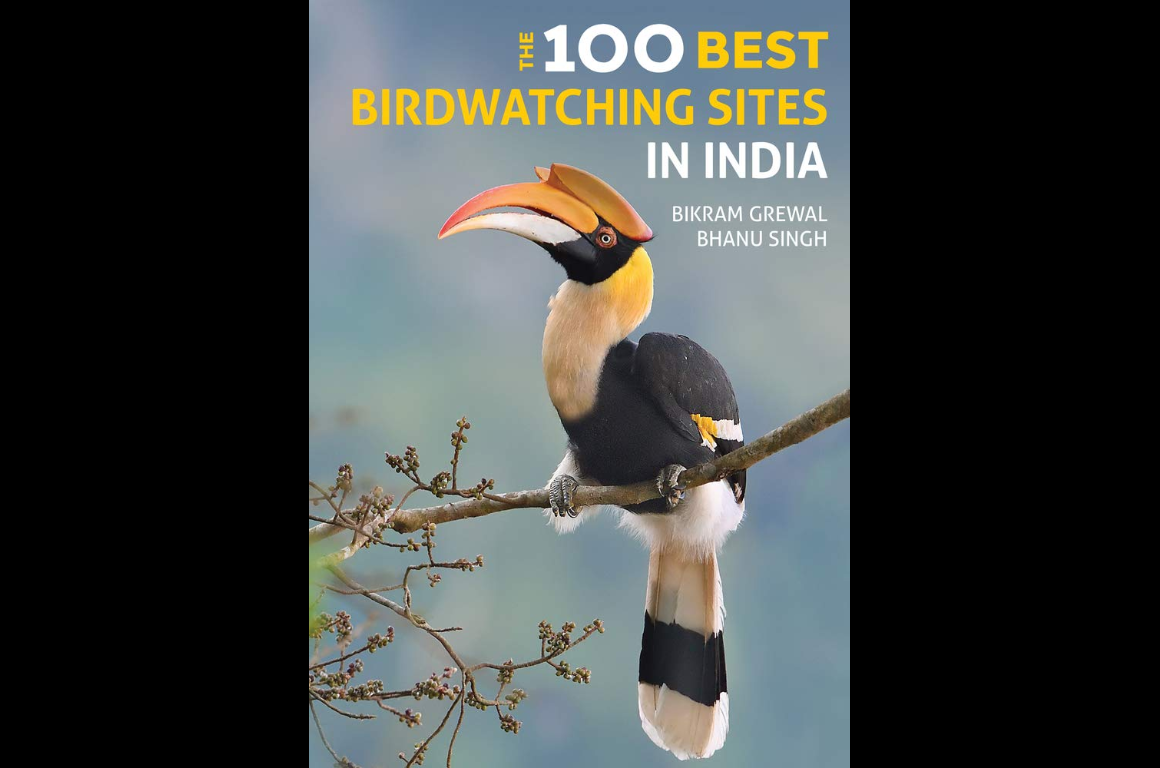 Having more than 1300 bird species, including over 75 endemics, it is hard to resist the lure of India – something I know from personal experience. In 304 pages, The 100 Best Birdwatching Sites in India by Grewal and Singh, where-to-watch-birds guide describes the 100 top hotspots throughout the Indian mainland, but also the Andaman and Nicobar Islands. Published in February 2020, this is the first edition.

Bikram Grewal is the author of over ten books on birds of the subcontinent and also acts as a consultant on eco-tourism. Bhanu Singh is one of India’s leading wildlife photographers whose images and articles are regularly published in national and international publications.

Presuming that you dream of birding India, you can find general travel info in Rough Guide or Lonely Planet, but specific country-wide info on finding birds were mostly missing. India is a huge and logistically frightening country. The 100 Best Birdwatching Sites in India allows you to focus on species (Index at pg. 295), reserves and states (starting from pg. 16), making the planning process easier. This guide helps you to get more organised by offering info on many less-known reserves that are often omitted from the general travel guides, as well as more birding info for well-known reserves than in the general travel guides.

The introductory chapters occupy the first 15 pages and cover topics ranging from climate, geography, habitats, threats to birds and glossary of terms. The bird habitats actually deal with the biomes of India, and sadly, there is no map of biomes for travellers to orient themselves. This was only the first of many times when I asked myself whether the guide was meant for local or for international birders, because their level of familiarity is clearly different and requires a different information. The glossary mainly deals with specific habitats to be found in the subcontinent and is, oddly, accompanied with two bird topography photos illustrating totally irrelevant terms such as primaries and ear-coverts.

The next 256 pages are devoted to reserve guides (pity, the reserves are not covered in the Contents, only the states are). The individual reserve guides follow, starting with a very basic map with reserve boundaries, main villages/towns and roads, next to a fact box underlying the nearest towns, local habitats, the key bird species, other specialties and the best time to visit. The reserve guides are further divided into specific Birdwatching Sites, Access & Accommodation, and Conservation.

The book ends with recommended reading, web sites and Facebook groups of numerous local conservation and birding organisations, checklist of birds of India (mentioning the taxonomy followed – Praveen, Jayapal & Pittie, 2016 – as well as the IUCN Red List status, but, sadly, not the number of species listed), and ends with the index of birds listing all the pages where they are mentioned (useful for targeted birding).

In the main section, each set of hotspots starts with a two-page state intro focusing on climate, access & transportation, health & safety, and the birdwatching highlights; including a basic map showing the main cities, the river systems and the birding hotspots. Next to the map is a list of the hotspots numbered in it, but printed in rather small pale-brown font on a beige paper, the list is barely readable.

In Access & Accommodation, sometimes villages or towns are recommended, elsewhere hotels and lodges, but the info on them varies. Sometimes it’s a website (preferred, yet uncommon), sometimes a snail mail address, sometimes a telephone number. I didn’t noticed an e-mail being mentioned, though I haven’t read every chapter, but focused on Gujarat and Maharashtra and, within them, reserves I am familiar with. I visited Gujarat three times (and 6 out of 7 areas described) and Maharashtra once (2 out of 5), so I will use the reserves I am familiar with to check the strengths and weaknesses of this site guide.

Completely disregarding its size, each hotspot is given a two page coverage. Those two pages include a small map, one landscape photo and additional 2 to 6 bird photos. Small reserves such as the Khijadiya and the Thol Lake Wildlife Sanctuaries in Gujarat are mostly well described. I would say the same for the smallish Velavadar National Park (Gujarat) – reasonably well described. Yet, with larger protected areas things get more complicated. 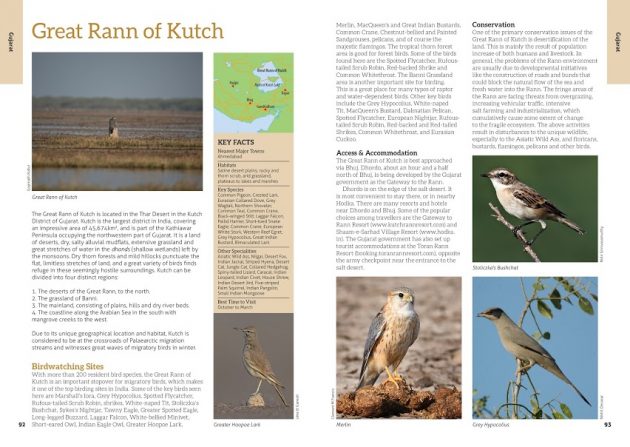 Let me see some of the larger areas now. Browsing Gujarat, I am checking the Great Rann of Kutch (GRK). Under “Birdwatching sites” there is not a single site mentioned, but a rather extensive list of birds instead. Next to it is a box with key species, so why doubling a bird list, especially since that kind of info is easy to find at eBird? The only references in that chapter are to biomes, “the tropical thorn forest area” and “the Banni Grassland area”, which is not marked and is next to impossible to locate on any map (not the least because of the very few rather low quality maps available to travellers). Some more touristy places, therefore offering more accommodation choices are mentioned under “Access & Accommodation”, but they do not suit birders well because they are quite far away from birding sites they are likely to visit, such as Nalia for Great Indian Bustard or Fulay for Hypocolius, which – again – are not mentioned in the text (Nakhatrana offers closer accommodation choices, even Fulay). 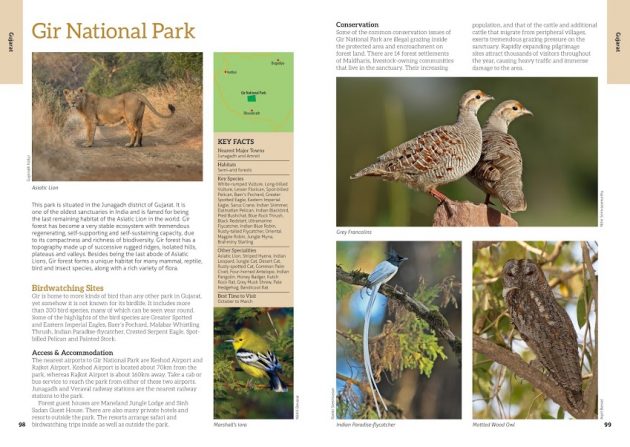 Staying in Gujarat which I know well, for instance Gir National Park cannot be entered by a private vehicle and all visitors are required to hire one from a fleet of small Maruti Gypsy 4x4s with a driver and a guide (this info is not provided by The 100 Best Birdwatching Sites in India). My group arrived in a larger and more comfortable SUV and with a knowledgeable bird guide from within the state. Hence, it was a bit of an annoyance to be forced to hire a general nature guide who knows mostly mammals. After several drives with such nature guides, we were finally lucky to book Manoj, who not only knows birds, but is especially good with owls and nightjars. In The 100 Birdwatching Sites in India I haven’t noticed a single park guide to be recommended and visiting birders certainly want to know which guides know their birds.

But that is not the only thing. Together with 4 bird photos and one of the Asiatic Lion, for which Gir NP is famous, there is very little text on the park. Gir has seven rivers and four large dams (which is not mentioned either) and I would expect some advice on “this lake holds population of …” and “that river offers reliable sightings of …”, but I may be wrong. I already mentioned that you cannot wander on your own in this park. There are, if I remember well, a dozen or so trails and drivers pick your trail at random, to prevent every group from demanding the trail with the most reliable lion sightings (grouping all lion-photographers in a single region would, actually, serve birders well). Hence, it is a matter of luck which trail you get and probably makes no sense to rise much trail-relevant hopes in the guide. 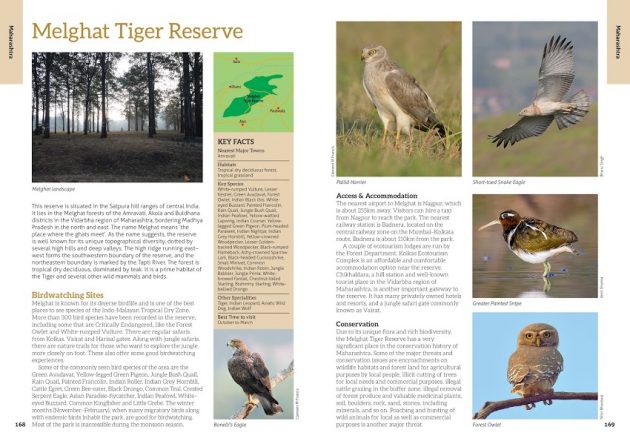 For a comparison, Melghat Tiger Reserve in Maharashtra has one landscape, five bird photos (one of them shot by my dear friend Nitin Bhardway when we explored this park together) and with only one paragraph on birdwatching sites more than Gir, it is noticeably better described. This reserve can be explored in a private vehicle (which is omitted from the guide), and hiring a local nature guide is left to your willingness to do so. We searched for the Critically Endangered Forest Owlet on our own in the morning and decided to hire a guide to find us one in the afternoon. Such larger parks require fewer photos and a paragraph or two more on individual sectors of the reserve and what can be expected in which. While such information wouldn’t be of much use in Gir, where you have no choice of a trail, in the Melghat chapter it would be highly recommendable. 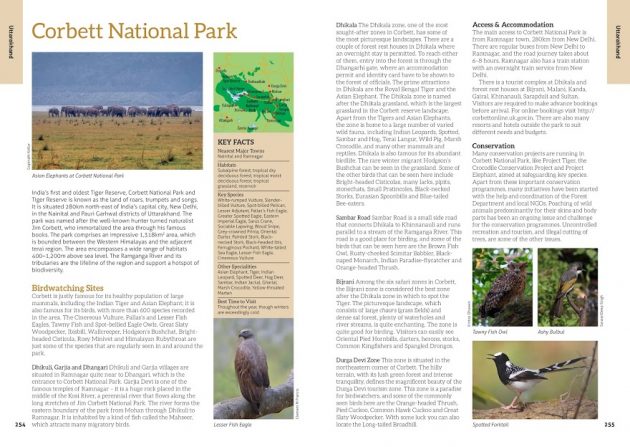 Now I am going further from the areas I have visited, to those of which I only read. For example, possibly the best birding area of India with over 600 bird species, the Corbett National Park in Uttarakhand. Here, the photos are small and there is a lot more text, especially under the Birdwatching Sites. In it, the introductory paragraph is followed by five sub-chapters on various park sectors, exactly what I missed in those I described previously.

Having in mind the two-pages spread restriction, quality of description for larger parks varies, from the well described Corbett and the fairly well covered Melghat, to those that leave you with a feeling “hey, is this all??”, e.g. Gir NP, to especially poor coverage of complex larger areas, such as the Great Rann of Kutch. I cannot understand why there would be such a difference in the amount of details, but there clearly was room for additional contributing authors to fill the gaps.

Cons:
• inconsistent coverage – some reserves covered in far more details than others

In the end, this guide is what we were awaiting for quite some time, possibly since Nigel Wheatley’s Where to Watch Birds in Asia from 1996. The 100 Best Birdwatching Sites in India leads the way – I couldn’t find any competition published in this century. Therefore, I would recommend this guide and those magnificent birding destinations, and I hope that the second edition will be even better.

Aelian's On The Nature Of Animals: The Classics Can Be Fun!

« Previous post
Where Are You Birding This Final Weekend of April 2020?
Next post »
There goes the neighborhood