The Brown Pelican and the Peruvian Pelican are closely related and once were considered the same species. They are indeed very similar in all plumage stages, but the Peruvian Pelican is nearly twice as big as its northern counterpart. Both pelicans are still common, but their population have been negatively affected by strong El Niño fluctuations and by exercise use of pesticides. The Brown Pelican occurs in both the Pacific and Atlantic coasts of North America and northern South America. The Peruvian Pelican is restricted to the cold water of the Humboldt Current along the coast of Peru and Chile. The two overlap in the northern coast of Peru, which constitutes the Brown Pelican’s southern most point in its regular wintering ground along the Pacific. Both are the only Pelican in their non-overlapping breeding grounds. Both pelicans have a very specialized foraging strategy that depends on abundant fish near the surface. They dive-plunge to scoop-in fish in schools with its long bill and expandable throat pouch. Changes in fish abundance and location near the surface has caused catastrophic die-offs in the Peruvian Pelican. The El Niño phenomenon brings about a giant patch of warm water, thousands of miles long. This mass of warm water is large enough to alter regional weather patterns. Because of the temperature change, anchovetas (a type of anchovy) move into deeper water to stay cool. That’s fine for them – but they’re a dietary staple of pelicans, which can no longer dive down far enough to reach them for food. Analyses of stomach content of dead pelicans during a die-off found that their digestive tracts were either empty or contained fish the pelicans don’t normally eat. The Brown Pelican has had its share of trial and tribulations. They nearly disappeared from North America between the late 1950s and early 1970s because of pesticides entering the food chain. Some pesticides killed pelicans directly, while DDT contamination led to thin-shelled eggs that broke under the weight of the parents. In 1970, Brown Pelicans were federally listed as endangered. The plight of pelicans, raptors, and other species led to a ban on DDT in 1972 and a reduction in endrin use, allowing pelican numbers to rise. By 1985, numbers along the Atlantic and eastern Gulf coasts had recovered enough to delist those populations. The Brown Pelican is Louisiana’s state bird. They had to be reintroduced to that state in 1968. The species reached pre-pesticide numbers by the late 1990s and was fully delisted in 2009. Pelicans are protected by the Migratory Bird Treaty Act. Abandoned fishing line also threatens pelicans along with many marine animals. It has been estimated that more than 700 adult and immature pelicans die each year in Florida alone from entanglement in sport-fishing gear.

Pelicans are an excellent barometer of the overall health of an environment. Climate change or water pollution that lead to minor changes in food availability have the potential to cause serious population declines in entire populations. 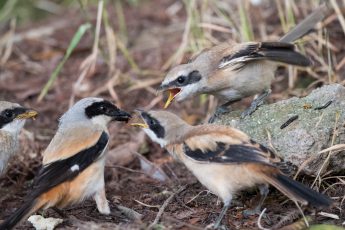 The Joys of Parenthood at Nanhui, Shanghai

« Previous post
Swift Care Ontario: Sometimes It Takes a Village
Next post »
Clark’s Grebes Were Once Considered a Color Morph of the Western Grebe