I am preparing for the new census of one of the rarest birds of Serbia, the globally threatened Great Bustard, taking place two days from now. Together with African Kori Bustard (which I observed on a camping trip in the Central Kalahari Game Reserve), this is the heaviest flying bird in the world. Males often reach a weight of 18 kg (40 lb), a standing height of more than a metre (105 cm–3 ft 5 in) and a wingspan of more than two and a half metres (2.7 m–8 ft 10 in). Females are half of that size.

It is estimated that there were more than 1000 Great Bustards in the northern lowlands of Serbia at the beginning of the 20th century, but back then these birds were also present in the south and the east of the country. Habitat destruction combined with hunting has pushed them away from their former breeding grounds. What remains of their range is currently protected as the Pastures of Great Bustard Special Nature Reserve, but in the last few years only a dozen birds remain, and only one adult male among them.

The Pastures of Great Bustard occupy 6770 ha of extensive steppe, bordered by meadows, pasture, arable fields and seasonally inundated depressions in the north of the country, towards the triple border with Romania and Hungary. That area should be able to support ten times as many bustards. Yet, in the first years of this century, we had 35 birds, last year we had 10 and how many we have now remains to be seen. 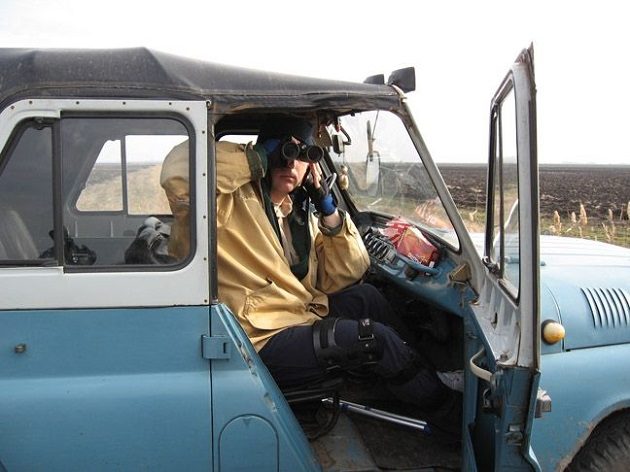 What treats do they face? In the breeding season grazing cattle may walk through the nest, breaking the eggs, while wild and domestic pigs may eat both eggs and chicks. Beside natural grasslands, they breed in arable fields (primarily alfalfa) where there is no grazing, but they risk being killed by combine harvesters. A female will count on its cryptic plumage till the last moment, and when she loses her nerve and takes flight, it is already too late for the chicks.

Last but not least, the Special Nature Reserve is being managed by the local hunting club – the reserve occupies their hunting ground. Bustards are very susceptible to any kind of disturbance and, naturally, hunters like to shoot. Not the strictly protected bustards, but Red Foxes, Brown Hares, Pheasants, as well as Hooded Crows and Rooks. Nevertheless, bustards don’t like the presence of people, especially that noisy kind of people.

What is the latest outcome of all this? I should see for myself in two days. If they live in the open and can reach 18 kg, at least they should be easy to find and count? No, far from it. Sitting on the ground in taller grass, they are all but invisible. In short grass, you do not know whether is it a Roe Deer or a Great Bustard, they are very similar in size.

Bustards are being counted in February because their breeding season starts in March. And the main obstacle for the counters will be mud. Lots of it.

I will keep you posted in the part two of this blog.